When the Children Marched: The Birmingham Civil Rights Movement 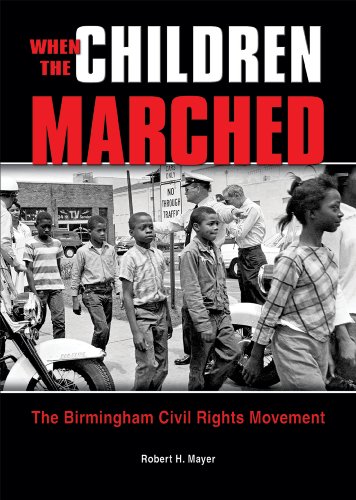 “This book should flourish wherever it is found . . .”

Some writers have the ability to bring the past back to life, and author Robert H. Mayer does just that with his book When the Children Marched: The Birmingham Civil Rights Movement.

Mr. Mayer literally “blows” the reader back to the Jim Crow era by opening this detailed study of the Birmingham Civil Rights Movement with a power-packed chapter called “Blown into History.” In this chapter, the Reverend Fred L. Shuttlesworth, a prominent civil rights leader of that time, narrowly escapes death after a bomb destroys his home while he and his family relax and watch television.

When the debris settles, neighbors and church members arrive with shotguns and pistols, ready for battle. But Reverend Shuttlesworth says, “We are going to love our enemies.”

After this dramatic—and earsplitting—opening, Mr. Mayer takes readers on a meticulous journey through the segregated streets of 1956 Birmingham, where Reverend Shuttlesworth mimics the activities of a leader named Martin Luther King, Jr. and pushes to integrate public buses, ball parks, and taxi cabs.

Though the demonstrations are nonviolent in nature, Reverend Shuttlesworth’s campaign results in hundreds of arrests, threats from the Ku Klux Klan, and harassment by the local sheriff. The brutality is staggering, including attacks by snarling police dogs and being sprayed with high-pressured hoses.

Knowing that “the world is watching,” the Reverend presses on, because the violence by the authorities and the nonviolence by the blacks are the only way to get the attention of Washington, DC, and the rest of the world.

The movement fluctuates, and when it begins to fade, one eccentric protester declares “the best way to energize the movement is to recruit young people.” Beginning with prom queens, basketball stars and football stars, black leaders use “influence and power” to persuade other young people to join the effort.

Soon children are walking out of school by the hundreds and getting arrested by the thousands. Some are brutalized with fire hoses and police dogs, many are locked in overcrowded detention rooms, and all understand that they may not return home alive.

When the Children Marched is an outstanding documentary about the perilous marches that led to the desegregation of Birmingham, Alabama. Even those who actually grew up during the marches and sit-ins would do well to read this book, which includes references to Dick Gregory, Governor George Wallace, the Freedom Fighters, President John F. Kennedy, and his brother Robert Kennedy.

Mr. Mayer writes with a passion and precision that places the reader in the thick of the action. He details every bombing and arrest, every victory and setback. An outstanding collection of archival photographs revive the courage and trauma of that time through closeup shots of mangled buildings, determined children, and nonviolent protestors kneeling under the cutting spray of water.

Mr. Mayer also includes a timeline, detailed chapter notes, a glossary, and a convenient list of books and websites for further reading.

There are inserts that explain the Jim Crow Laws, maps of the cities participating in the movement, excerpts of letters from the President of the United States, and responses from his opposition—namely, Governor George Wallace. There are even closeup photographs of Denise McNair, Carol Robertson, Addie Mae Collins, and Cynthia Wesley, the four young girls who died after the bombing of the Sixteenth Street Baptist Church.

This book should flourish wherever it is found: in a waiting room, on a library shelf, in a history student’s book bag, or on a proud family’s bookshelf.