When Brooklyn Was Queer: A History 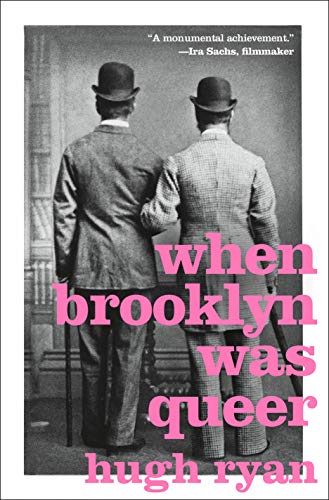 “In When Brooklyn Was Queer, Ryan digs deeper into both the history of Brooklyn, and its queer community . . . ‘Pick a random book about “New York City” history, and chances are, it will mention Brooklyn . . . sporadically, if at all. The chance that it talks about the queer history of Brooklyn? Nearly zero.’”

When Brooklyn Was Queer by Hugh Ryan, is a well-designed web knitting history together with the story of Brooklyn, NY—before it became a borough and after—and the lives and experiences of the queer people who populated the community. “If we imagine each of the queer lives this book will discuss as a single thread, Brooklyn is the place where they all momentarily knot together before shooting out again in every direction.”

As Ryan says throughout the book, “Queer life in Brooklyn began by the water, and spread outward.”

Ryan compresses the many terms used throughout history to describe what is now referred to as LGBTQ into just “queer” for the purpose of consistency. Terms such as tribade, urning, gynander, and invert were used and are now forgotten, where terms such as transgender, gay, queen, drag, transvestite, just to name a few, are still used today. Ryan has selected “queer” as a substitute for these and many other terms.

The book identifies eras chronologically that talk about both Brooklyn and its specific personality, and the queer community that populated the many neighborhoods, without which there would not have been a Brooklyn.

Ryan introduces the reader to many well-known historical figures who, through their queerness, molded the town, beginning with Poet Walt Whitman and the queer writing found in his book Leaves of Grass. In his poem “Crossing the Brooklyn Ferry” Whitman wrote about cruising in America, where cruising became the search for same sex relationships.

As Ryan moves beyond Whitman he talks about how Brooklyn’s popularity rose between 1883 and 1910 due in large part to the building of the Brooklyn Bridge and the growth of the Navy Yard. Ryan pins a great deal of queerness on the Navy and its sailors, many of whom have left home for the first time, and have never experienced the close quarters of men together.

Entertainment and the theater brought out people who both enjoyed performing and those who enjoyed watching. Although during this time mostly white men were the audience, women found their place on the stage. “Performers often lived in Brooklyn . . . and Brooklynites had easy local access if they wanted to get involved in showbiz . . .”

One of the most interesting aspects of Ryan’s work is his deep research into queer individuals whose lives intertwined with Brooklyn’s growth. Many names unfamiliar to the average reader are laid bare in the details of their personal lives and how they contributed to Brooklyn’s queerness; Ada Dwyer and Eleanor Robson, Mary Hallock Foote and Helena de Kay Gilder—couples whose passions went beyond the norms of the day.

Ryan moves from the discussion of the 19th century to the 20th century, explaining, “if the nineteenth century was about noticing queer people, the twentieth century would be about controlling them.”

The chapter on Criminal Perverts is the most disturbing as Ryan delves into the moral abyss created by the authorities and self-proclaimed moralists whose goal was to either fix those they considered deviants, or eliminate them altogether. “. . . in an effort to regulate gay male sex, New York City would try everything from mass arrests to a first-of-its-kind program that sent men convicted of degeneracy to therapists instead of jails . . .”

Here Ryan’s research provides insight into the jails in Brooklyn that created queer space; that is, “Although prisons are rarely considered a queer space . . . they are as intimately connected with queer people as any other physical locations . . .” Throughout this chapter Ryan examines specific stories of queer individuals who experienced violence and injustice at the hands of the legal and medical professionals, and the civilian morality organizations.

One such organization, the Committee of Fourteen, formed in 1905, became one of the most powerful groups developed to address what they considered to be the deviant scourge . . . the queers. Originally formed to shut down hotels operating under the Raines Law; “an 1896 state statute that banned the sale of alcohol on Sundays,” the committee continued to pursue its fight against queer activities well into the 1930s with the misconception that, “The idea that homosexuality was something that you learned or were inducted into was the committee’s great fear.”

But Brooklyn and its queer community continued to grow during the Roaring Twenties when artists and entertainers gathered. Coney Island grew in popularity with entertainers as Ryan describes the life of Mabel Hampton. She was drawn into the lesbian world at an early age and never turned back—it was a time when coming out became a possibility for the queer community.

As he delves further into the queer community, especially at Coney Island, he discusses another aspect of queerness. “. . . one aspect of Coney was queer by design: the freak shows, where gender-nonconforming and intersex people were both celebrated and exploited.”

Artists such as Hart Crane celebrated homosexuality through their works. Crane’s love for Emil Opffer is well reported, and Ryan dips into Opffers background as well as his family’s queerness.

And yet, as with everything in life, change was eminent. As the Roaring Twenties traveled into history and the 1930s came to the forefront, Brooklyn began to change. No longer a hidden location, the building of the subway brought Brooklyn closer to its neighbors and with that an increase in population.

Many of the artistic publications, so popular with the queer public, went out of business. Poet Marianne Moore, editor of The Dial is described as having a “sexless public persona.” And yet, “Moore had a supportive family of queer women, older role models for happy same-sex couples and an environment that treated relationships between women as normal and healthy.”

But now not only the police, but by newly founded media tabloids looking for sex scandals increased their observations of the queer community. In addition to increased scrutiny, as the 1930s moved forward, the queer community became less open. “In 1933, Prohibition was officially repealed [and] the law encouraged straight people to avoid gay bars, and to keep queer people out of straight establishments.”

As World War II crept into American lives, an artist commune at 7 Middaugh Street, a place that “provided emotional sustenance, queer space, and literary inspiration . . .” became a home to many queers. Also known as the February House, it became the home for a number of popular artists and entertainers including W. H. Auden, Carson McCullers, Jerome Robbins, and Christopher Isherwood.

When America entered the war in 1941, the Navy Yard had already seen expansion. “By 1942 the Brooklyn Navy Yard was employing more than thirty thousand civilian workers . . .” The decrease in male workers, due to the war, created an increase in female workers to fill the need, thus creating another environment of same-sex exposure.

Ryan takes this story to its end with “The Great Erasure. 1945–69” where he talks about the “declining white queer-man scene” when Thomas Painter observed the decrease in white men and increase in Puerto Rican men at Coney Island. Public housing increased and long-time residents found themselves without homes. The suburbs grew as the populations moved; the waterfront was becoming physically isolated due to the increase in major roads through Brooklyn. As Ryan put it, “Already, queer Brooklyn was being forgotten.”

In When Brooklyn Was Queer, Ryan digs deeper into both the history of Brooklyn, and its queer community more than any other book. “Pick a random book about ‘New York City’ history, and chances are, it will mention Brooklyn . . . sporadically, if at all. The chance that it talks about the queer history of Brooklyn? Nearly zero.”

For those who know little or nothing about either topic, this will be a fascinating read and a learning experience. For those who are familiar with both topics, it will be an acknowledgement of a topic all too often buried in the sands near Coney Island.