What You Never Knew: A Novel 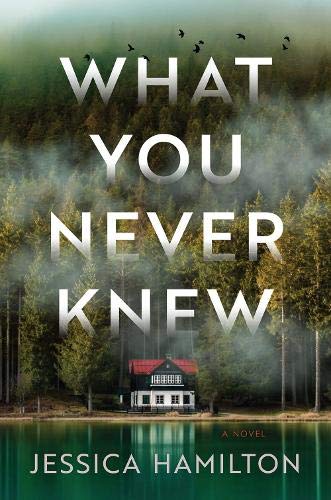 “If you have nothing to do over a nice, rainy weekend, pick up this book. You won’t put it down until Monday rolls around.”

Jessica Hamilton’s debut novel, What You Never Knew is one of those rare finds that keeps you up for days.

Hamilton’s approach to the story is unique in that she writes from the first-person point of view of two characters—sisters—May and June Bennett, one dead, the other alive, who share the stories of their youth. And with each chapter change and point of view change, the story unfolds a little more and a little more until the sisters both come to a horrific reality in their past.

As the story opens, May is at a lawyer’s office for the reading of her mother’s will and learns that she has inherited a family island in Lake Champlain, Vermont. For 30 years she and her sister were both led to believe that Avril Island and its cottage, had been sold after their father’s mysterious disappearance.

To her horror she learns the truth and in her anger with her deceased mother, she causes an automobile accident in which she dies.

Everything now comes to June, grieving the loss of her sister and compelled to learn the truth about the island. Divorced and with twin daughters, she leaves the daughters with her ex-husband and travels to Avril Island to set things straight.

The story takes off at full speed from this point when June arrives at the island and discovers that even after 30 years, the house and island remain in good shape, as if well taken care of.

As other characters begin to enter her life, the mystery of the island and the death of her father rise to a level of contention. Although many people are surprised to see a Bennett return, several of them are not pleased with this turn of events and the mystery deepens.

When Ezra Keen appears, June recognizes him as the boy she spent most of her time with as a young girl on the island. His father, West, was the local handyman who performed necessary tasks for her mother. Ezra has grown into a handsome man whose memories of June haunt him even after 30 years.

Hamilton begins to develop the mystery of Avril Island as the growing relationship between Ezra and June deepens, and with each day secrets begin to pile up, driving June’s curiosity to a breaking point.

Adding to that, events begin to occur on the island that June cannot explain, and here Hamilton does an excellent job of foreshadowing events to come while at the same time uncovering unexplainable events that occurred in the distant past.

Shadowy items appear and disappear, the record player mysteriously turns itself on, June discovers a cross in the woods near the cottage—she destroys it, and yet it reappears multiple times—are these the works of teenagers playing tricks or is there something more at hand. Hamilton leaves us guessing.

All the while, as June struggles to uncover her family’s past, May’s ghost occupies the cottage and follows June’s activities. May knows there is something in her past that will answer all of June’s questions, but as a spirit, her memory is not clear. May is learning at the same time June is learning.

Hamilton creatively weaves personal experiences into the story as well as mysterious events. Relationships, affairs, angry events that threaten June’s safety, and June’s craving to learn the truth are all things that drive her to search in places where she does not belong.

As with any good mystery, there is a horrific event, a breathtaking climax, that leaves the reader wondering how this will ever end. And yet, Hamilton neatly ties up all the loose fragments to a satisfactory ending.

If you have nothing to do over a nice, rainy weekend, pick up this book. You won’t put it down until Monday rolls around.