What We Were Promised 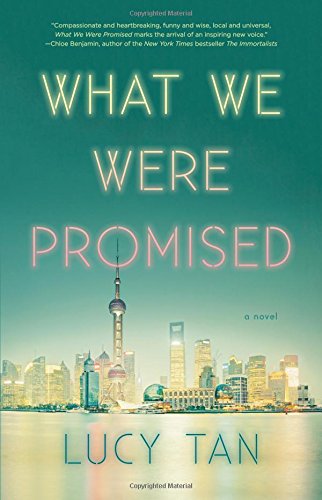 While the works of Amy Tan, Gish Jen, and other popular Asian-American writers have charted the trials and tribulations of immigrants in the United States, Lucy Tan reverses field in her low-key, introspective novel What We Were Promised, focusing on immigrants who return to their homeland.

It's the eve of Expo 2010 in Shanghai, with China taking the spotlight on a global stage, and by all outward appearances, Wei and Lina Zhen are prime examples of the Chinese success story. Since departing their rural hometown for the States on scholarship two decades before, the couple have fulfilled the American dream, and have recently relocated to a ritzy condo in Shanghai, along with their daughter Karen, living a life of catered luxury.

But underneath the glitz, disillusionment lurks. As the son of a loyal Communist cadre, Wei was once expected to help guide China into a golden age; instead, he’s become a run-of-the-mill ad exec whose major claim to fame is appearing in a cheesy reality show. Lina was once a precocious teen with a wide-open future, but since being betrothed to Wei in an arranged marriage, she’s become a short-tempered, disaffected wife, with nothing to fill her days but the latest fashions and gossip with the other rich neighbors’ wives.

The plot is precipitated by two characters who enter the family’s orbit: Sunny, a maid at the family’s condo with her own modest origins; and Qiang, Wei’s ne’er-do-well, long-absent younger brother. When a bracelet that has special meaning to Lina goes missing, Sunny comes under suspicion, resulting in a surprising turn of luck that draws her closer to the Zhens. Meanwhile, Qiang learns of the couple’s return to China, and pops in for an extended visit, setting off long-simmering resentments, as well as the possible rekindling of an old romance with Lina.

What We Were Promised is about the here and now, providing a glimpse of a modern China populated by the have-nots, the haves, and the have-mores. But it’s also a tale that’s haunted by the past, frequently flashing back to Lina, Wei, and Qiang’s youth.

As Qiang’s visit in the present day brings out bursts of regret and jealousy, shared childhood memories peel back layers of the threesome’s relations to uncover intertwined family secrets and obligations, loves found and lost, and paths not taken. It is in these flashback sections that Tan’s writing is most piquant, capturing a nostalgic, elegiac vibe through small details: the smell of the country during a walk home from school, a shared moment of laughter or innocent embarrassment between Qiang and Lina. Lina’s father advises her that all she needs in a relationship is “time and commitment,” and in its most touching moments, What We Were Promised demonstrates how commitment can erode over time, or find ways to regenerate itself.

Tan is less successful in presenting a convincing depiction of the high-class business life in modern Shanghai, but still paints some memorable scenes, including a pivotal passage on the grounds of the Shanghai Expo, as East and West, and personal revelations of past and present, collide.

Throughout, oppositions are set up between the characters. Qiang, a stalwart believer in a China unswayed by foreign influence, is nonetheless part of an aimless generation, forever hobnobbing with shady gangs. In contrast, Wei and Lina are successful by any conventional measure, but find themselves bemused with a modern China that is now as bewildering as any foreign country. Sunny, who has escaped to the city to flee her dreary countryside past, struggles to succeed in an upper-class milieu even as she copes with her own feelings of isolation. Avoiding histrionics, Tan keeps the storytelling quiet, taking the time to get into her characters’ heads, and if their conversations and declarations can feel a bit stiff at times, she keeps the reader invested in their fates.

What We Were Promised, as the title suggests, is about the gulf between expectations and reality; it’s ironic, then, that the story doesn’t lead to the memorable climax that one might expect. The characters’ fates play out in parallel lines, with each conflict resolved in a tidy manner, and for all the skill of Tan’s storytelling, the dramatic arcs ultimately don’t offer up many surprises or shocks.

By its conclusion, one might find What We Were Promised a pleasant tale that isn’t as deeply felt as it could have been. Still, Tan’s knack for detail and her sympathetic characters mark her as an author to pay attention to in the future.