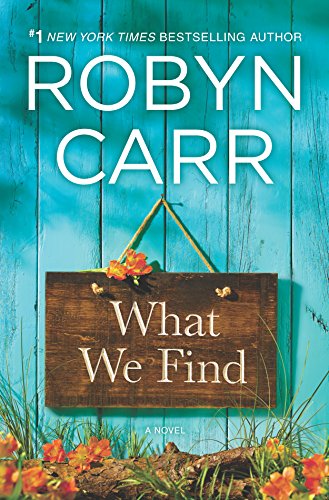 When your world is falling apart around you, what do you do? For Maggie Sullivan, heroine of What We Find, the answer is, “You run home.” In Maggie’s case, home is her father’s campground in the mountains of Colorado.

The first novel in Robyn Carr’s new Sullivan’s Crossing series, What We Find is the story of a talented neurosurgeon, Maggie Sullivan, who is at a personal crossroads: Her business partners are being sued for fraud, Maggie is being sued for malpractice, and her two-year relationship with another doctor has crumbled under the pressure of Maggie’s unplanned pregnancy and subsequent miscarriage.

A two-week escape to Sullivan’s Crossing, her father’s campground, grows to a months-long stay after Maggie’s father has a heart attack soon after her arrival. Luckily, she has the assistance of her father’s employees, friends, and a handsome but mysterious camper who is willing to pitch in. Sparks fly between the two, of course, and each has to face the issues in their own and each others’ pasts to decide if they are a good fit.

Robyn Carr is a master of the small-town romance, as exemplified by the wild success of her Virgin River series. Towns are charming, if imperfect, challenges are relatable, and endings provide closure. Carr’s characters offer a refreshing change from many in modern romance: No one is damaged too badly, and adults actually act like adults.

What We Find is no exception to her personal credo: “It’s . . . empowering to watch smart women choosing and falling love with men of honor and integrity.” Maggie Sullivan might be bending a little under pressure, but she’s nowhere near crumbling; Cal (short for California) Jones, the mysterious hiker, is similarly challenged but not broken by personal tragedy.

Sully, Maggie’s father, is gruff and funny, and a nice foil for her brittle, snobbish mother. Carr imbues most of her secondary characters with both positive and negative characteristics, thereby creating people rather than trotting out stock romance novel characters. Carr lends that same knack for description to her setting. Rural Colorado, with all of its beauty and danger, is as much a character in this novel as any of the people.

As the beginning of a continuing series, What We Find does suffer from a surfeit of “telling.” Descriptive passages are lengthy and detailed, setting up scenes, relationships, and characters for future novels. As a result, the novel has an episodic feel; transitions between scenes and chapters are sometimes rough. Chapters are divided up with well-chosen quotes from famous writers and thinkers, but often feel divorced from the previous chapter.

Choosing to write about non-dramatic adults does leave Carr with the issue of conflict in her novel. Many strict romance novels rely on a clash between the male and female protagonist to drive the story forward; Carr takes a different path (and so takes her novel beyond the romance genre) by eschewing the “will they or won’t they” dynamic and investing in smaller conflicts within the story. This tactic has mixed success: Maggie’s actions as a doctor in crisis situations are genuinely absorbing, while issues with the court case against her and Cal’s family problems peter out with a whimper.  Still, Carr has taken an admirable stand against unrealistic angst, and deserves kudos for the attempt.

With What We Find, Robyn Carr has launched a comfortable new series, sure to appeal to her fans. Though the novel has some issues with pacing and description overload, it’s an easy springtime read loaded with positive characters and a sweet ending.