What We Do NOW: Standing Up for Your Values in Trump's America 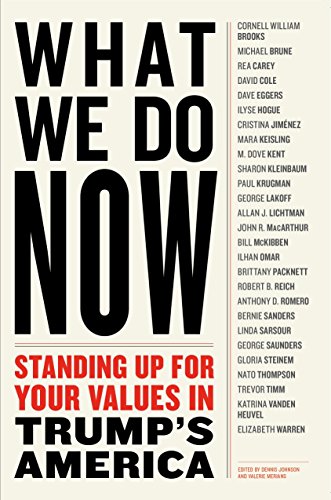 On November 9, 2016, the morning after the presidential election, Americans awoke in surprise and shock. Many who had strongly opposed the unexpected victory of Donald Trump were overwhelmed by feelings of horror, disillusionment, fear, despair, and confusion. In the shadow of such feelings, they asked pressing questions like “How will we survive?” “What can we do?” “When can we start?”

In response, and in less then two months, Melville House released What We Do NOW: Standing Up for Your Values in Trump’s America. This collection of essays by progressive writers confronts the desperate and immediate need of that specific audience—a valiant task for a solid book, as the huge and blatant NOW of its title will immediately recede from present to past, especially as Trump-related events happen in dizzying succession.

What We Do NOW offers guidance to that distraught sector of the American public. Some essays offer paths of action; others give general perspectives; while still others already seem outdated and naive or may be too abstract for the book’s action-oriented purpose. Yet for the immediacy of the need it fills as well as for its lightning-fast creation, the book deserves tolerance for those few failings.

The editors have divided the book into eleven sections and a “Coda,” or conclusion. While some sections offer general guidance, such as the first, “Setting a New Liberal Agenda,” most cover specific issues—with titles like “Racial Justice,” “Immigration,” “Women’s Rights,” Climate Change,” and “LGBTQ Rights.” Yet one essential insight the book offers is that the boundaries between these issues MUST remain fluid for groups to achieve sustained broad-based success.

Which leads to the question of whether this collection of essays succeeds in its purpose—or perhaps even does more than its brash title proposes.

Reading Section 1, “Setting a New Liberal Agenda,” might prove disappointing at first. The initial essay, “Where Do We Go from Here?” by Bernie Sanders, first appeared before the election and provides little that the likely reader will not know. It criticizes “too-big-to-fail” banks and pushes for reforms to create a system to benefit the middle and working class. Important goals for sure, but nothing action-specific, new, or immediate.

Elizabeth Warren in “Remarks to the AFL-CIO Executive Council” (delivered two days after the election), exhorts readers to stand up to all bigotry with no compromise. Yet statements such as “when [Trump’s] goal is to increase the economic security of middle-class families, then count me in” will already seem naïve and outdated to impatient readers, as Warren herself has since become a symbol of resistance to Trump under the banner of “And She Persisted.”

However, the book truly gets going by the third essay of Section 1, “The Way to Stop Trump,” by David Cole (ACLU legal director). Cole uses the model of citizens who resisted George W. Bush’s “war on terror,” recommending effective actions and organizations. He writes:

“As I describe in my recent book, Engines of Liberty: The Power of Citizen Activists to Make Constitutional Law, they protested, filed lawsuits, wrote human rights reports, lobbied foreign audiences and governments to bring pressure to bear on the United States, leaked classified documents, and broadly condemned the administration’s actions as violations of fundamental constitutional and human rights.”

Cole tells of the crucial gains and successes of groups such as Human Rights First, the Center for Constitutional Rights and Reprieve, the Bill of Rights Defense Committee, the ACLU, and the PEN American Center, thus preparing readers for the 24 essays that follow.

The essays then gain traction (with a few exceptions), and effectively provide vital guidance. The following passages summarize some important elements of that guidance, along with supporting quotations from the essays.

Remember, you are not alone in your grief and despair. Feel it, don’t be hard on yourself, and then, when you are ready, emerge to fight, being as courageous as you can.

“Clearly, this is a moment of crisis for all of us. . . . But I have talked to enough congregants to understand some of the things you’re feeling: Confusion, Shock. Grief. Despair. Anger. Sadness. Frustration. Fury. Panic. Terror. Grief. Grief. Grief. But also: Determination. Resilience. Hope. Optimism. Might. Solidarity. Community. Courage.”
—Rabbi Sharon Kleinbaum, leader of world’s largest LGBT synagogue

Yes, things have definitely happened that you could not have imagined.

“During this election, bigotry resurfaced in ways we thought were no longer relevant, and racism was normalized.”
—Cornell William Brooks, president and CEO, NAACP

Look beyond your own issues and stand up for all threatened, vulnerable groups, even in your daily activities.

“I can walk past you and see your safety pin [an early sign of opposition to Trump], but will you stop, film, and intervene if you see me being pulled over and assaulted?”
—African American activist Brittany Packnett, vice president, national community alliances, Teach for America

“Because if he tries to register Muslims, there are going to be a lot more Muslims to register than he ever imagined. Millions of us Muslims!”
—Rabbi Sharon Kleinbaum

Do not act in isolation. Reach out, make connections, get to know your neighbors.

“It is essential we recognize the inherent obligation of humanity: to build community. . . . The way to prevent individual apathy is to bring everyone to the table. . . . It is simple, talk to people, visit with them, broaden coalitions of love and acceptance.”
—Ilhan Omar, member, Minnesota House of Representatives, first Somali-American legislator

From your own issue-oriented groups, make alliances with all vulnerable targeted groups to create broad-based progressive coalitions of people all pulling in the same direction.

“Just as important [as protecting the environment], though, is that we continue to stand in outspoken solidarity with all those who were targeted by Trump . . . If we turn a blind eye to inequality, racism, misogyny, and xenophobia, then we will be forced to deal with the consequences, and those consequences affect everything, including environmental progress.”
—Michael Brune, executive director, Sierra Club

Demand rigor and honesty from the media, opposing the ratings-driven reporting aimed at entertainment that gave candidate Trump his outsized platform.

“There’s only one answer [for a free press]: adversarial investigative journalism at its toughest and most unsparing.”
—Trevor Timm, executive director, Freedom of the Press Foundation

Perhaps most importantly, find specific activities to engage in and groups to join or support.

Probably the most useful essay on this topic, even the most useful in the entire book, is Robert B. Reich’s “The First 100 Days Resistance Agenda,” which, despite its title, will long outlast those 100 days. Berkeley economics professor Reich was Secretary of Labor under President Clinton and also served under Presidents Ford and Carter.

Reich gives advice on contacting senators and representatives (including web sites to get their phone numbers), on marches and demonstrations, on Trump economic boycotts, on writing letters to editors and op-eds, on using social media, on promoting investigative journalism, and much more.

In fact, Reich’s essay itself makes this book a must-read. The energized reader might want to go straight to this essay, and may be out making new contacts even before finishing it. It’s that helpful and insightful.

So, What We Do NOW is a flawed but highly effective book aimed at a very specific audience of people distraught yet motivated (or wanting to become motivated) by the election of Donald Trump. It provides essential inspiration, information, resources, and insights. The book will likely even give its readers talking points to rouse to action those anti-Trump people still in shock, in hiding, or for whatever reason not yet inclined to action.

What We Do NOW is a controversial book by design, and even its intended audience might not agree with everything it says, but the publisher and editors have performed an important service by putting these ideas out for consideration.

Finally, a few more quotations might help further communicate the flavor of this collection:

“[Stopping Trump] will take an enraged citizenry, a persistent civil society, a vigilant media, brave insiders, and judges and other government officials who take seriously their responsibility to uphold the Constitution . . . . We live in a constitutional democracy, one that is expressly designed to check the impulses of dangerous men. It will do so if and only if we insist on it.”
—David Cole

“We are speeding toward a dark corridor, my friends. Keep your eyes open, your hearts stout, and be ready for the fight.”
—David Eggers, novelist