What We Lose: A Novel 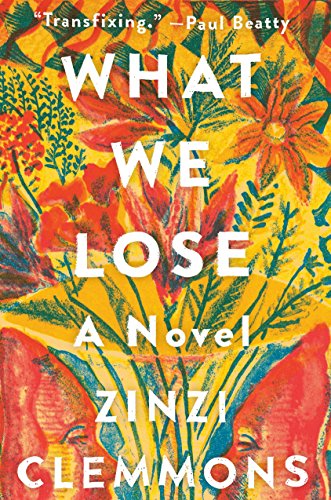 “Clemmons’ voice is natural and appealing . . . and . . . what she is telling us is powerfully poignant and emotional, even at times, devastatingly resonant. . . . a rare talent.”

Author Zinzi Clemmons in her acclaimed debut novel What We Lose writes a hybrid book. Her publisher coined a new genre for this work, autofiction. Indeed this is an apt compound descriptor—part fiction, part autobiography, part memoir, part nonfiction, it is a departure from the accepted norm of debut novels. But what remains universal and anchors the book is the tapestry of universal themes.

As the title suggests “loss” is a major theme, and identity another; minor themes weaved throughout are mother and daughter relationships, the process of grieving, and coming of age to one’s self-, sexual-, and racial- identities. Clemmons says in a New York Times interview with John Williams about this book, “I see fiction as having more possibilities than memoir. I wanted to be able to tell this emotional story, and that’s what is true. The fact that some of the facts line up with my life I almost see as incidental.”

Clemmons’ voice is natural and appealing—it is almost as if she is in the room speaking to us—and yet what she is telling us is powerfully poignant and emotional, even at times, devastatingly resonant. She is a rare talent.

Thandi, the novel’s protagonist, is a thirtysomething black woman. Her father, a black man born in Queens, New York, and her mother a “mixed race” South African born in Johannesburg, live in Philadelphia where her father teaches mathematics at a local university. Her mother, a nurse (“she migrated upward from nursing assistant to head nurse at the university hospital”) is the powerful force that binds the small family. She is the lynchpin for Thandi, her daughter (the first-person narrator), her husband, and her relationships with people who crossed her path since she was a child. “Her relationships with others were resilient; she had friendships that persisted over decades, oceans, breakups,” writes her daughter.

On her identity, Thandi writes in one of her meditations: “Being a light-skinned black woman is like being a well-dressed person who is also homeless. You may be able to pass in mainstream society, appearing acceptable to other, even desired. But in reality you have nowhere to rest, nowhere to feel safe. Even while you’re out in public, feeling fine and free, inside you cannot shake the feeling of rootlessness. Others may envy you, but this masks the fact that at night, there is nowhere safe for you, no place to call your own.”

Tragically, Dorothy, the mother develops cancer and then succumbs to the disease. Thandi articulates in realistic and unsentimental terms that anyone who has shared this ordeal knows well, the process of helping care for her mother and the almost unbearable grief she undergoes when her mother dies. The process of grieving and acceptance are the threads through which much of the novel is worked. One of Thandi’s poignant poems expertly crafts her loss:

still hear her voice, even right now as I am speaking to you.

But she is dead.

When I look at this picture of her on the beach, I can feel the

sun on my skin. I can hear the way she spoke to me.

But she is gone.

I can dream her, and I can hear her cry. She tell me what

Happened that day, and she cries with me. She tells me not to be afraid.

But she is dead.

If I look long enough at a flower, I can see the color of her

cheeks in the stigma.

But she is not here.

As time passes and Thandi undergoes many of the highlights and lowlights in the life of a well educated, twentysomething millennial, she can write near the end of the novel, “Sometimes, my dreams of my mother are pleasant. In them, I barely register her presence, but her presence is what colors them with warmth and comfort. It is enough to make me still feel warm and nurtured after I wake up.”

Thandi’s best friend since they were three years old, her various crushes from high school and college, her great love, the father of their son whom she raises as a single mother, and her South African family including her beloved grandfather and flighty cousin Lyndall, come to life in the vignettes that fill the pages. The format of the book is refreshingly original—vignettes, meditations, diary entries, political documents, photographs, doodles, and mathematical graphs—Clemmons has forged a brave new world for aspiring novelists.

In the middle of the novel, there is a photograph of Winnie Mandela, Nelson Mandela’s second wife whom he subsequently divorced. Thandi writes that her mother looked like a “caramel colored” Winnie. Clemmons diverges into reflections of how stalwart Winnie Mandela, Mother of the Nation, lost her way, and became involved in kidnapping and murder plots.

Clemmons’ South African roots are strong—maybe not as strong as her mother’s were—but strong enough that she regularly visits South Africa to see her family. She is quoted in an interview with her publisher: “These trips fell somewhere between visits to grandma’s house and part-time residence. There isn’t a simple term for my relationship to South Africa—I don’t live there, but I’ve spent so much time there that I don’t interact with it as a visitor. I don’t go to tourist spots or stay in hotels. I stay in my family’s homes, and I know their neighbors and friends. I often call it my second home.” She hopes it won’t be long before she returns to her mother’s home country.

We hope it isn’t too long before she produces another novel.