What They Saved: Pieces of a Jewish Past 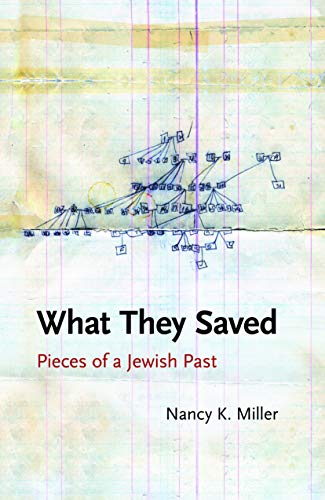 “‘Every new piece of information keeps me on the road to the ever-expanding possibility of the quest, a quest that in the end will still yield only partial knowledge—and will never give me, return to me, those past lives.’”

Sorting and packing the possessions of a recently deceased loved one is a bittersweet task for surviving relatives. The personal belongings Nancy K. Miller inherited from her father, including photographs, correspondence, legal documents, and religious items, led her on a genealogical exploration of her father’s side of the family, a side she barely knew.

What They Saved is Ms. Miller’s chronicle of that search, a book that focuses less on what artifacts were saved than on how she pursued and sometimes actually found the stories behind them. This focus on process will especially interest genealogy enthusiasts, but other readers may find it similar to listening to professionals in a field other than their own talk shop. Ms. Miller acknowledges as much,

“The embarrassment of riches that flows from the resources of the Internet finds a counterpart in the embarrassment of engaging in the quest itself…If you are also a writer, you must ask yourself why anyone else should care about what you find, and admit that they might not.”

Whether or not readers care about what Ms. Miller found, few will want as much detail as she provides about how she found it. Indeed, were it not for Ms. Miller’s engaging prose style and the commitment I made to review this book I doubt I would have finished reading it.

My own and my wife’s anecdotal familial evidence indicates that it is not unusual for one side of a lineage to dominate a particular family’s life. In our respective families of origin one branch (my maternal grandmother’s and my wife’s paternal grandmother’s) constituted a large clan of great-aunts and great-uncles, first cousins once removed and second cousins, which overshadowed the other branches of the family.

In Ms. Miller’s family of origin her mother’s family, the Millers, eclipsed her father’s, the Kipnises, to such an extent that after an early divorce several decades ago our author chose to take her mother’s maiden name rather than revert to her own. That decision was also motivated by a wish for a less Jewish surname, though both sides of her family were Jews who immigrated from the Russian Empire at the turn of the previous century.

I wonder whether a book about the Millers would feature more fully developed characters and be a more engaging read than What They Saved, which describes Ms. Miller’s search for the Kipnises. Speaking of her Uncle Sam Kipnis, Ms. Miller writes, “this man who fascinates me with his absence now would not have enchanted me by his presence then. My love affair is with the quest.” Ironically the Millers left Ms. Miller fewer physical artifacts than did the Kipnises, perhaps because the Miller possessions had to be divided among a greater number of cousins.

When Ms. Miller’s paternal grandparents Rafael and Sheyndel Kipnis and their nine-year-old son Sam emigrated from Russia in 1906 they boarded a train in Kishniev (now called Chisinau), the site three years earlier of a terrible pogrom and the subject of a famous poem by Chaim Nachman Bialik, in what is today Moldova, and boarded a ship in Rotterdam that took them to New York. Ms. Miller’s great-grandfather Chaim had already immigrated to New York several years earlier and apparently adapted well to the new country in which his son, Rafael, would never feel entirely at home. Three years before boarding the train to Rotterdam the parents and their young son had visited a Kishniev photography studio and had their portrait taken.

The Kipnis family story was that they left because of the pogrom and the threat of future violence, but Ms. Miller discovered that the family originated in a smaller town north of Kishniev in southwestern Ukraine. Ms. Miller wonders whether the sojourn in Kishniev lasted for several years in pursuit of economic opportunity in the local big city, or whether they stayed there only briefly en route to America. In pursuit of her family’s origins Ms. Miller made two separate trips to Moldova. Parts of the book resemble a travelogue.

Eight months after Raphael, Sheyndel, and Sam arrived in New York Ms. Miller’s father Louis was born in December 1906. Sam left school early and married young, distributed beer for Dutch Schultz in the Bronx, and hung out with gangsters at the Cotton Club during prohibition. When his nine-year old son Julian developed asthma in 1934 Sam moved with his family to Arizona. Over the decades Sam and Louis corresponded but never saw each other in person again.

Ms. Miller can only conjecture why the brothers never met again: differences in educational achievement and cultural refinement? As a lawyer and officer of the court was Louis reluctant to associate with a known criminal with connections in the mob (though it appears that after moving to Tucson all of Sam’s endeavors were legitimate and legal)? Her cousin Julian was 79 and a retired CIA officer when Ms. Miller met him for the first time in Memphis, Tennessee. He had apparently followed his father into a clandestine, if legal, line of work. Ms. Miller also met and became close with Julian’s daughter Sarah despite Sarah’s conversion to Christianity.

Some of the letters Ms. Miller’s parents saved describe their courtship in the early to mid 1930s. It is striking that at a time when the Nazis were banning Jews from all spheres of public life in Germany, American universities and employers were implementing quotas to limit Jewish participation in elite professions, and Father Coughlin was polluting the airways in this country with his own brand of bigotry, Ms. Millers parents jokingly refer to themselves as anti-Semites. Ms. Miller concludes that her parents did not want to be anything other than Jewish, but wanted someone with whom to be Jewish.

Ms. Miller has written at greater length about her parents’ marriage in her earlier book, Bequest and Betrayal: Memoirs of a Parent’s Death, details of which she mentions in this book including her mother’s deathbed revelation that her father was never a satisfactory lover.

Louis Kipnis’ college transcript reveals his and his wife’s class difference. Though both families originated as Eastern European petit bourgeois, the new start in America proved more successful for the Millers. Louis started City College in the mid-nineteen twenties but dropped out after three semesters to attend Brooklyn Law School, which did not require a college degree for admission back then. Apparently a liberal arts education for its own sake was beyond his means; he needed a vocation.

Two decades later while still working as a lawyer Louis returned to CCNY at night and finished his BA. By contrast Mollie Miller was able to complete her BA in French at Hunter College in four years during which she did not have to hold a job and lived with her family on Manhattan’s West End Avenue, which remains a rather posh address to this day. By the time Louis started college his family had moved from the Lower East Side to the Bronx.

The ritual objects Ms. Miller inherited include her father’s set of tefillin, whose leather straps and boxes she discarded, saving only the scrolls they contained. Having grown up largely secular it apparently never occurred to her that some 21st century Jewish women actually use tefillin. From the Millers she inherited a set of candlesticks, which she does sometimes light on Friday nights. Ms. Miller and her sister are both childless, so she has neither children nor nieces and nephews to leave her own possessions and those she inherited. The book conveys a sense that its author is exploring a family line that will come to an end when she and her sister are no more.

At the outset Ms. Miller conceived of the research that became this book as a spline, a thin piece of curved wood that holds the sides of a frame in place, where the sides of the frame represent the artifacts whose stories she tried to track down and fill the empty spaces with narrative. Near the end of the book she chose another metaphor, an asymptote—a line that a curve forever approaches but never touches—to represent her “frustration at what would not fall together.” Is the search its own reward?

“Every new piece of information keeps me on the road to the ever-expanding possibility of the quest, a quest that in the end will still yield only partial knowledge—and will never give me, return to me, those past lives.”

Readers who are more interested in those past lives than in the quest will likely find What They Saved a frustrating read. The cover photograph is of a hand drawn, genealogical flowchart. It is regrettable that a more legible chart was not included with the text to help readers quickly discern various relatives’ relationships to the author.