What She Wants (Life in Icicle Falls) 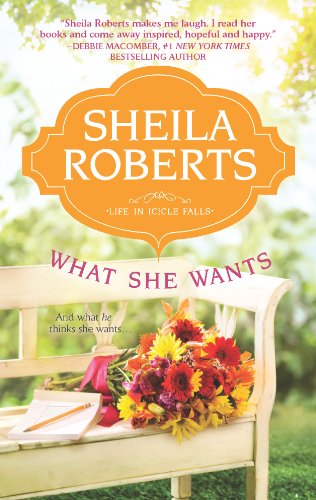 It can be tough to be a man in Icicle Falls, especially if you’ve reached your mid- to late-thirties and you’re still unmarried.

Jonathan, resident computer guru and every girl’s buddy, is tired of being permanently relegated to the friend zone. Happening upon a romance novel in the local library, he’s soon awakened to the possibilities contained within: what every woman wants, detailed in an easy to read paperback!

Though he’s initially ribbed by his similarly unmarried friends (and one unhappily married one) about his newfound conversion to romance, they’re soon following his lead and reshaping their personalities and lives to become What She Wants.

Sheila Roberts’ latest installation of the Icicle Falls saga is a harmless romp.

Men and women are both fair game for stereotyping: The Geek, The Short Guy with Attitude, The Outwardly Successful Guy who has Issues, The Prom Queen, The Ice Queen, The Bitch . . . Though this conceit could have grown tiresome, Ms. Roberts balances it out by making her characters so darn likeable that her stereotyping can be forgiven.

The interchanges between the characters are most often enjoyable, and Ms. Roberts has provided a nice balance to the romantic search in her happily married couple (proving one can be happy in Icicle Falls). It was a refreshing surprise when she turns some romantic conventions on their ears, showing that “what she wants” isn’t always as easily defined in real life as it is in a novel.

Even when the characters are rom-com friendly and the situations and solutions perfectly suited to a Lifetime movie, Ms. Roberts makes it impossible to remain cynical in the face of their collective niceness. Icicle Falls, at least in this iteration, is a friendly, welcoming town—and well worth an afternoon’s visit.