What the #@&% Is That?: The Saga Anthology of the Monstrous and the Macabre 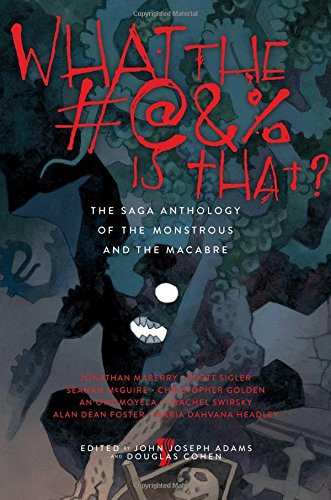 What the #@&% Is That?, edited by John Joseph Adams and Douglas Cohen, features fiction from established authors such as John Langan, Laird Barron, Christopher Golden, and Johnathan Mayberry, as well as up and coming writers that, from the outstanding quality of the collection, are the future of the genre.

All of the stories are carefully curated and skillfully edited. Although the styles range from pulp to literary, every story is well written. It is a pleasure to find an anthology with such consistent quality that recognizes not every reader has similar taste.

The theme of the anthology is very loose. The only connection between stories is that, at some point, one of the characters says “What the #@&% is that?” or some variation of that line. The styles range from bizarro to folktales and many in between, with the thin connecting thread of the spontaneous and unexpected that takes one by surprise.

“Those Gaddamn Cookies” is a scifi-horror story from Scott Sigler about friends aboard a space station who smell cookies. Or is it brownies? They can’t be sure. What both characters know is that the closer they get to their shipmate’s cabin, the more they want to keep those baked goods to themselves. Killing each other for sole ownership of the sweets becomes an increasingly attractive idea.

Sigler’s style is incredibly readable. He seamlessly blends humor, science fiction and horror into what is possibly the most enjoyable story in the entire collection.

“Little Widow” from Maria Dahvana Headley is a beautifully written story of three teenage sister wives from the cult of Heaven’s Avengers. The cult is gone, but the little widows are still in the world, renaming themselves after famous movie stars and trying to cope.

While trying to find a place to belong, they stumble on a carnival where circus geeks bite the heads of dinosaurs. It reads just as crazy amazing as it sounds. The language of this story is rhythmic, the pacing perfect.

The imagery is so vivid that it bursts from the page into the reader’s mind in technicolor.  The story is like the love child between Tim Burton’s Big Fish and The Imaginarium of Doctor Parnassus. Headley is less well known than some of the authors in this collection, but not for long.

One of the more experimental stories is Seanan McGuire’s “#CONNOLYHOUSE #WESHOULDNTBE HERE.” Usually “experimental” formatting in short stories comes off as pretentious and boring, but McGuire more than makes it work in this series of social media messages. She absolutely nails it.

The thread of tweets from paranormal investigators @boo_peep, @screamking and @screamqueen are a slow, excruciatingly tense escalation from amusing and campy to terrifying. Not once did McGuire break the spell that she wove with each description and the anxiety and doubt that crept in as the “guests” further explored the house. One of the strengths of the story is taking the expectation of the reader and destroying it. This is not a cute story. This is not innocent tale of reality television gone wrong that ends in cliché. It is weird fiction at its finest.

The wide range of styles, genres, and themes in What the #@&% Is That? make it perfect for finding a new favorite author or discovering upcoming voices in fiction. The three stories mentioned are from three newer writers, yet they are some of the strongest and most original in the collection.

Anthologies of such high quality are rare gems. If John Joseph Adams and Douglas Cohen continue to edit such beautifully done books, they will be editors to look out for in terms of dependability to deliver fiction that is always in high demand.