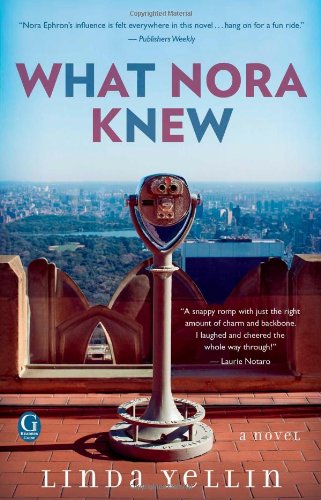 “A fun and delightful read.”

Molly Hallberg is divorced, pushing 40, and dating a very reliable chiropractor named Russell who has two turtles named Joyce and Irwin. At least she lives in one of the best cities on Earth: Manhattan.

Successfully evading the family upholstery business, Molly writes for the Gawker-like ezine EyeSpy, headed by an idea-crazed editor named Diedre. Desperate for her own column, Molly agrees to take on one of Diedre's crazy projects: an article about love and finding your soulmate—written “Nora Ephron”style.

Since she’s so unlucky in love—Russell serving as living proof—Molly questions her qualifications for writing such a piece, much less in the style of the incomparable Nora Ephron; however, at this point she'll try anything for that byline and photo.

During a weekend visit to her friend Pamela's mansion in the Hamptons, along with other "interesting" people, Molly is seated at the same table as the seemingly self absorbed lady killer Cameron Duncan, mystery writer extraordinaire. Considering her captive—and quite handsome—audience, she interviews Duncan for her article. Surrounded by other adoring, swooning women, Duncan responds with just the right romantic sentiments, even claiming to be a big Nora Ephron fan, which causes the ladies' hormones to soar—and Molly's blood to boil.

Desperate to find the secret to love, Molly continues to interview everybody and anybody. When she asks old Mr. Messick, the liquor store owner, how he knew Mrs. Messick was the one he replied, “You marry someone. Wait thirty years. If she's still there—she's the one." Unsatisfied and even more distressed Molly soldiers on. But her deep-seated cynicism and inclination toward settling for the safe and reliable prevents her from seeing what’s right in front of her face.

By applying the same formula to her novel as Ephron did for her movies, Yellin perfectly reflects an imperfect world and the difficulty in finding true love—despite subsequent happy endings. Unlike most chick-lit leads, protagonist Molly isn't a hopeless, sighing romantic mush who's sitting around waiting for her prince, she's too busy jumping out of planes, smuggling cosmetic shaped vibrators, high kicking with the Rockettes, verbally sparring with Duncan, and being cynical. Molly's skepticism isn't over the top but rather endearing and very understandable, given the circumstances.

Even though the secondary characters may feel like the usual suspects: the annoying-yet-friend-potential coworker, the fun and indulgent best-friend/neighbor across the hall, the quirky family, the milquetoast boyfriend and the hot, sexy, mentally stimulating, but emotionally frustrating guy, they are well-used and nicely balanced.

Though she hasn't put any new spin on the genre or created an amazing twist in the plot, Linda Yellin's easygoing style and light humor elicit plenty of laughs—and lots of introspection—before the obvious is revealed, thus making the journey the best part of getting there.

A fun and delightful read.