What It's Like to Be a Dog: And Other Adventures in Animal Neuroscience 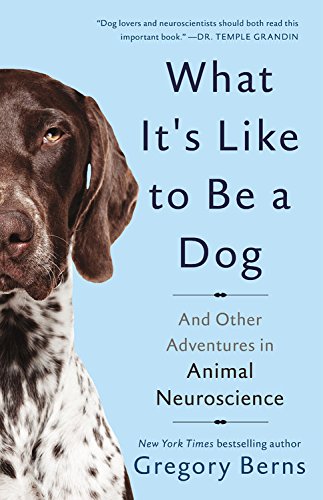 In what was informally called the “Dog Project,” author and scientist Gregory Berns trained his own dog to sit very still in an MRI. His study then expanded to scan more than 20 dogs. Berns acknowledges dogs respond idiosyncratically to human direction; it took months of training before any dog was considered predictable enough to enter and “stay put” inside an MRI, and many dogs did not pass the test.

Berns explains the sciency and technical parts of his study in detail. He lists the varieties of MRI and explains how each works. One variety of MRI is the fMRI. The “f” in fMRI stands for “functional” and it generates rapid, continuous images. Another type of MRI is the Diffusion Tensor Imager (DTI). The DTI images the structure of the brain’s pathways, which can show relative brain complexity across different species.

Berns’ goal in conducting the study was to understand the objective experience of other animals through brain imaging. There are some who believe we can never know the mind of another animal; however, it is believed by Berns and others that for brains over a certain level of complexity the basis for emotion, movement, body motions, sleep, thirst, and hunger are common, and can be revealed by imaging.

There are limitations to applying MRI imaging to dogs. Though all the dogs were well treated, “fully awake and unrestrained,” the MRI machine was noisy, and Berns provided earplugs or earmuffs for the dogs’ ears. The dogs also had to stay very still because any movement affected image capture.

MRI images are also open to interpretation. Berns writes, “One can’t infer a mental process from activity in a single region [of the brain] by itself.” There has also been criticism from the scientific community from results that were published without statistical controls needed to reduce bias and “false positives.”

The Dog Project for Berns was not just science but also personal.  He writes, “As I learned more about the canine brain, I became convinced we had much in common with dogs at the deepest levels . . . Over and over, I found structures in the brains of animals that looked to be organized in the same way at corresponding parts of our own brains. And not only did these parts look the same, they functioned the same way.”

Berns describes how he trained the dogs. As the MRI is a noisy, loud, and confining, a significant part of the training involved getting the dog to sit still in it. The hardest part, however, was training a dog to think about an activity (by showing the dog an object of interest such as food or a toy) but not move.

Thinking about an object but not moving is called the “Go-No Go” task. The belief is that having a dog visualize a Go-No Go” test in an MRI would show in a coarse manner a dog’s innermost thoughts. Berns was searching for brain part responsible for inhibition—the “No Go” part of the “Go-No Go.” He found this part of the brain to be a small region of the frontal lobe.

The “Go-No Go” test is formally known as “the A-not-B test” and was originally designed by psychologist Jean Piaget, and though Piaget was only mentioned in passing, he is well known for his work in developmental psychology. Careful test design was considered necessary by Berns to address expected criticism from animal behaviorists who believe that animals cannot and can never think. The construction of the test was intended to show that a dog’s responses were evidence of mind and not instinct.

If one accepts that animals do think, the next question would be to ask would be how much can animals understand? For example, do dogs have a human-level semantic system in their brains? Can a dog understand nuance from word and context alone, or are dogs simply guessing, or acting for treats, or do dogs simply do not care, or is it something different altogether?

Berns admits he has no high hopes for dogs learning anything more than simple verb-object associations; i.e. “fetch the ball” is about the most one can hope for.

Berns’ dog study is at most only one-third of What It’s Like to Be a Dog. The remainder provides greater context and insight into animal cognition. Berns provides a very short history of neuroscience, cognitive psychology theory, and theory of mind. Berns writes, “Brains did not evolve to process information. They evolved to control movements of creatures.” This reviewer considers Berns’ arguments as oversimplification. For a more nuanced and better-argued view of the primitive roots of cognition, readers are advised to read in Cells to Civilizations by Enrico Coen, previously reviewed in NYJB.

Berns next discusses the brain architecture of simple animals, for example the jellyfish. The jellyfish has a nerve net but no brain, and though simple, jellyfish have been around without much change for 600 million years. A key part of evolution toward more complex brains is bilateralism with left-right coordination. Bilateralism is so important that all advanced animals’ brains have it, and bilateralism can be traced all the way back to animals that lived before the dinosaurs, including the tetrapods, sauropods, and cynodonts.

Another significant part of brain architecture is brain size, though the relation of size to intelligence continues to undergo considerable debate. For all species, the ratio of brain size to body size is fairly consistent, except for humans. Human brains are bigger than what would be predicted by body size. But brain size by itself doesn’t explain much in regard to function.

However, as brains get bigger, a brain’s functionality tends to get more modularized, and the modern brain appears to be a collection of semi-autonomous modules. For example, a good portion of dogs’ brains is dedicated to smelling, while a good portion of bat and dolphin brains are dedicated for echolocation, though neither smelling nor echolocation alone can be considered the best measure of intelligence.

Better measures for estimating intelligence have been called for. One of the newer measures determines intelligence from brain architecture is Encephalization Quotient (EQ), which measures neural density. Still, there are problems with EQ in regards to primates. Coincidentally (or perhaps from publication of this book) there have been media reports declaring dogs smarter than cats (based on EQ).

Though Berns asks important questions on cross-species comparative brain study he does not provide answers, instead he points to animals similar in intelligence to dogs and lets the reader ponder. The first of these animals whose intelligence is considered to be on par with dogs is the sea lion. Sea lions have been successfully trained through hand gestures, pictograms, words, and rhythm.

The dolphin’s hearing pathways are next to the visual cortex and scientists believe that dolphins “paint with sound” in a manner similar to bats. Bats and dolphins both echolocate, but their species are not related. That two unrelated species solve the same problem the same way is called “convergent evolution,” and given that hearing and echolocation can be common brain functions across different species, Berns takes a logical leap to believe that one actually could imagine what it is to be another animal. “Echolocation was not some alien skill that we could never relate to. Echolocation was just an amplification of perceptual skills that humans also possessed.”

Though no animal appears to be able to match human’s ability with language, animals and humans do communicate with each other, for example dogs recognize (and respond to) the difference between happy, sad, and angry in a human face, and by tone of voice.

Berns points out, “Our results have shown, no matter which animal’s brain we examined, that if it has a cortex, the animal is very likely sentient, and that its subjective experience can be understood by degrees of similarity to our own.”

Berns next considers the thylacine or Tasmanian tiger. The last known thylacine died in a zoo more than a hundred years ago, as they were hunted to extinction in Australia, Tasmania, and New Guinea because they were believed to kill sheep. Though the thylacine looked like a dog it was a not related to dogs; instead the thylacine was both a marsupial and a monotreme, an egg-laying mammal. Berns writes, “[T]he thylacines are gone, and nobody had studied their behavior while they were around.” Berns is also surprised that there hasn’t to date been any greater study of marsupial brains because the study of marsupial brains can provide clues in evolution.

Berns was able to get access to preserved thylacine brains and scan them. He also scanned a non-extinct marsupial brain for comparison, in this case the Tasmanian devil, the closest living relative of the thylacine. When compared, thylacine brains and Tasmanians devil brains are both complex, indicating that thylacines probably were predators. Berns writes, “There are no stupid carnivores.”

In the last chapter Berns recounts his medical training and his feeling in viewing the suffering of a dog used as a test subject for surgical/anesthetic drugs. The phrase Berns uses for medical studies that border on or crosses the line into mistreatment is “invasive,” and notes the use of living animals for surgical practice wasn’t ended until 2016.

In the manner that Berns carefully chooses his words, readers can easily imagine the ongoing horror. Berns was not the only researcher so affected. He points out that scientists who conduct animal research often join organizations for animal rights and animal advocacy. Here, no better moral question on the mistreatment of animals was asked by the 18th philosopher Jeremy Bentham: “The question is not, ‘Can they reason?’ nor, ‘Can they talk?’ but ‘Can they suffer?’”

What It’s Like to Be a Dog contains endnotes, an index, and black and white photos. The photos are mostly of (the exterior of) dogs, but there are also MRI brain scans of dogs and other species. A minor nit: It should have been obvious to an editor to add annotations to the brain scans, or at least a medial diagram of the brain to help the reader when Berns occasionally veers into jargon.