What Happens in Scotland 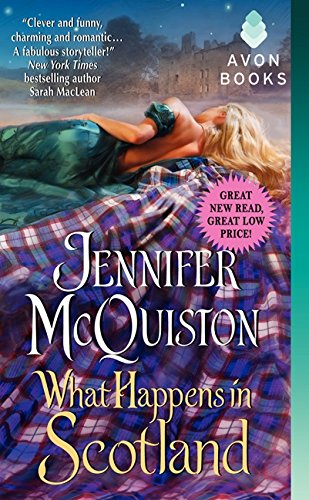 “. . . the only thing Georgette hated more than brandy and husbands was nudity.”

Fortunately, Lady Georgette Thorold has to face all three in the opening scene of Jennifer McQuiston’s rollicking romance novel What Happens in Scotland.

It is 1842. Lady Thorold is coming out of a two-year mourning for a husband she did not admire. To avoid the social season in London and have some time to herself, she accepts the invitation to stay at the Scottish home of a distant cousin.

After a night of which she has no recollection, Lady Georgette awakens in a strange room, with a strange man, both naked and smelling of brandy. She immediately begins a quest to find out how she got into her odd predicament.

Along the way, she finds out she’s married, has hired a barmaid/prostitute as a lady’s maid, and gains a kitten, a dog, and better understanding of herself.

Her heroine is bright, funny, and surprisingly honest with herself and others. When asked by her very new, very untrained maid, Elsie, why Georgette has reconsidered her employment, Georgette answers, “I’m a frightful snob.” It’s rare that any character in a romance novel ever admits something like that—probably out of concern that it will make the character unlikable. On the contrary, it was refreshing to have a character admit the obvious.

Elsie herself is a breath of fresh air. She’s just as sharp as her mistress, with an earthy humor and outlook serves as a nice counterpoint to Georgette’s flashes of primness, and sets the stage for Georgette’s change of heart.

It wouldn’t be a romance novel without a strapping hero, and Ms. McQuiston has created a lovely one in James MacKenzie. He is earnest, kind, and just as humorous as his new wife. Jamie is also blindsided by his impromptu marriage, and is as determined as his spouse to get out of his predicament. The younger son of an earl, he has no guarantee of fortune and so is seeking his future as the town solicitor. Wary of losing the respect of the town that has known him and of his foibles since childhood, he nevertheless makes dogged pursuit of the facts of the previous night.

The scenes with the two principles are funny, and generally believable. Their attraction is well written and compelling, as is their eventual coupling. Falling in love in a day is not likely, but if it could ever happen, it would be between these two. They fight, kiss, hunt the requisite bad guy, and trade histories, and by the end of their day, it’s delightfully easy to believe this couple really could be in love and have a plausible future.

There are a few clumsy sentences, a couple of tiresome “misunderstandings” (probably to create conflict), and a wild leap of logic or two. All in all, though, these are relatively minor issues.

A romance novel in which the heroine is not overwhelmed by the wealth of her counterpart and both stands up for and saves herself is priceless. Ms. McQuiston has created a funny, sparking, unique romance novel.