What Happened That Night: A Novel 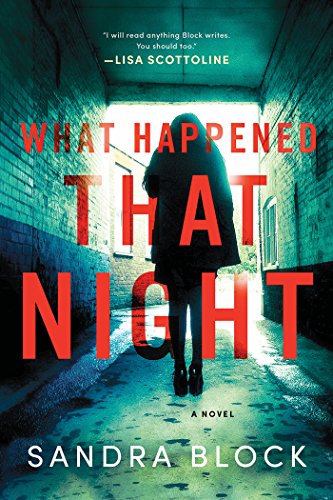 In Sandra Block’s new book, What Happened That Night, Dahlia, a paralegal wrestles with an event that happened to her five years earlier, and the memories of that event rush back when a video appears, and she learns that she was the victim of a gang rape.

The rape occurred at Harvard where she was a law student, and her career goals came to an abrupt stop—becoming a lawyer was no longer in her future, and dead-end paralegal work seemed to be the only opening.

Dahlia’s best friend, Eli, is her comfort. He is gay, and Dahlia is the person who accepts him for who he is, no questions asked. She has shared her situation with him, and like her, he asks no questions, just accepts her as a friend and her protector.

Enter into the picture—James—an IT guy who has a crush on Dahlia. When he asks her out, she does the unthinkable. She accepts. Their relationship begins to unfold on two levels: personal and revenge.

Dahlia and James plot retaliation as the identities of the perpetrators begin to surface. They identify all but one rapist, who remains hidden in the shadows.

On a personal level, their relationship is slow to gain momentum. James reveals he has Asperger’s, and there is something else in his background that he holds back.

The revenge begins with the first rapist. James and Dahlia frame him as a drug pusher, and he is arrested and jailed.

When this happens, a digital conversation between the other rapists takes place and they recognize that Dahlia must be the person behind the frame. The lead rapist, now a millionaire, will take care of Dahlia!

The plot thickens when the second rapist is discovered teaching in Vermont. James, with his IT knowledge, plants child pornography on #2’s computer. Dahlia anonymously reports this to the school principal, and #2 is gone.

Dahlia has confided in Eli about the revenge plot, and Eli is concerned that the plan could go amiss and Dahlia could be harmed. He pleads with her to stop but she continues.

When the lead rapist now threatens Dahlia and her family. She and James make short shrift of the millionaire.

When Dahlia discovers that there is a cigar box of hidden tapes that were recorded during other party rapes, she plans a trip to one of the ongoing rape parties to retrieve the evidence and put the fraternity out of business. Both James and Eli try to talk her out of this plan, but they fail. She discovers the cigar box and its contents, and when the frat boys attempt to rape her, she successfully escapes with James and Eli’s help. She turns the evidence over to the police, sues the club, and closes them down.

Now, life takes a turn for Dahlia. Her sister, a successful lawyer, helps her get into Stanford University where she can reapply to law school. It means leaving James. At the same time, the last rapist is finally identified, and Dahlia deals with him as well.

No spoiler alert here—Block does a good job of leading the reader to the conclusion with all the revenge loose clues tied up neatly; and she resolves the personal relationship in a satisfactory manner.

Block’s plot has promise but falls short in some ways. Dahlia’s revenge plans are too easy and present minimum danger to her. Even the threats to her family do not raise the tension or conflict levels.

Block’s approach to point of view is somewhat confusing. She uses first-person, present tense for Dahlia, which is very effective. Then she moves into another chapter, first-person present tense for James. James is not the protagonist, he is not an equal, simply a major character, not deserving of the first person POV. Block flips back and forth between these two characters and it is somewhat disconcerting.

Then she moves into other chapters that are backstory, five years previous, Dahlia’s first person again, written entirely in italics. Somewhat effective to lay out the importance of the gang rape and Dahlia’s PTSD as a result.

Add to this, Block writes chapters in digital dialogue where the rapists are discussing what has happened with their fraternity brothers. Other than the angst displayed by these characters, there is little reason for these chapters to exist. They resolve nothing and create little, if any, tension.

The story is okay. On a scale of one to ten, this one gets a five.