What Do Women Want?: Adventures in the Science of Female Desire 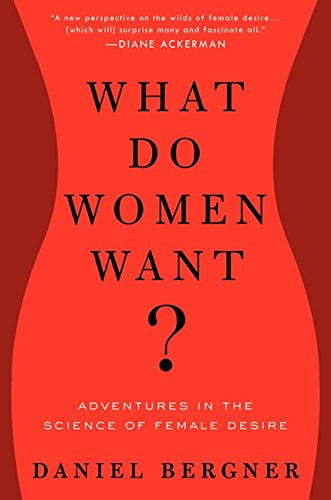 “Even though sex sells, the respectable HarperCollins should have known better than to go with this cash cow.”

The trouble with turning magazine articles into books is that for the most part they have little to add to what has already been written. What is best said in 5,000, 10,000, or even 15,000 words becomes laborious when stretched to nearly 200 pages of text, even with wide margins and 1.5-inch line spacing.

In his overhyped book about female sexuality, Daniel Bergner tries to compensate for this fact by offering a plethora of pornographic imagery—all in the name of illustrating research methods—but it does little more than titillate an otherwise bored reader.

And that is the least of the problems with this book about female sexuality, the main point of which is to illustrate that women are just as randy as men when it comes to sex.

For starters, the subtitle is oddly chosen. Adventures may be appropriate for Rin Tin Tin or Huckleberry Finn, but it hardly seems appropriate for a subject as serious as this one.

Relying on psychologists, sexologists, and others as sources, Mr. Bergner chats on about his Aha! moment meetings, but he fails to provide any footnotes, endnotes, or other sources to lend credibility to his investigations, so inaptly called “incendiary, profoundly insightful, and brilliantly illuminating” on the back cover of his book.

The most we get in the way of source material at the end of this lightweight treatise is a small, select list of books relating to each chapter, mainly written by the people Mr. Bergner has interviewed.

Mr. Bergner’s sources include a potpourri of “behavioral scientists, psychologists, sexologists and everyday women.” The professionals are linked to universities and no doubt carry out empirical studies, but they seem obscure and lacking in hardcore credentials. Even Mr. Bergner preemptively questions why he “never found himself phoning the psychology departments of Harvard or Yale or Princeton?”

One of his sources provides the answer: “Because we who do this work are second-class citizens,” she says, citing taboos on studying human sexuality. It is “unseemly to be down there,” she argues, “and unsettling to have scientists constantly threatening to send back information that might . . . tear presumptions to shreds.”

Who knew that scientists could be so hard on each other?

And what of the book’s contents? Mr. Bergner’s chapter on the history of sexuality—all of 12 pages—concludes with a brief nod to and dismissal of “recent pop psychology,” a possible pot calling the kettle black.

The chapter on Monkeys and Rats showcases one researcher “obsessed with rat ways of seeing and feeling, learning and lusting,” leading to experiments in which he masturbated female rats to excitement, then killed them in order to dissect their brains, thus “pinpoint[ing] recent neural activity.”

No wonder funding for this kind of research is hard to come by.

The chapter on Narcissism is troubling, beginning as it does with a female researcher’s declaration that “trying to figure out what women want is a real dilemma.” Of course she means sexually speaking, but still, can we not put that Freudian question to rest?

Another female researcher wanted to learn how to enhance female desire which she claimed “had ‘little to do with building better relationships,’ with fostering communication between [her] patients and their partners.” Indeed, at the very thought “she rolled her eyes.”

Another troubling chapter, The Alley, takes on “the appeal of rape,” or rape fantasies. Of course some women harbor thoughts of being conquered and violated in order to self-stimulate, but as one research respondent put it, “In fantasy we control the stimuli. In rape we have no control. I hate the term ‘rape fantasies.’”

In Magic, the discussion of aphrodisiacs—Big Pharma’s offer of sexual medicine—is equally chilling in a time when women’s “sexual dysfunction” is a big topic in the newest edition of the DSM-V, the bible of the psychiatric establishment.

Mr. Bergner’s journalistic inquiry, if a bit voyeuristic, is no doubt respectable. But for feminists and those who love them, a far better resource for understanding female sexuality and its complexities is the acclaimed Our Bodies, Ourselves or other works written by women and other experts. Their gender lens truly illuminates what goes on in the minds and bodies of women as sexual beings—without the pornographic boost.

Even though sex sells, the respectable HarperCollins should have known better than to go with this cash cow.