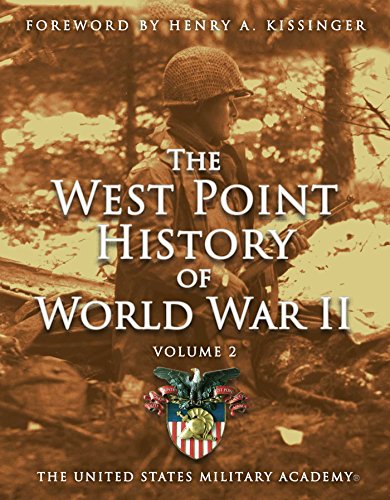 “this text should rightly become the standard undergraduate volume for any course studying World War II.”

Rowan Technologies continues their partnership with Simon and Schuster to produce the second volume in this series covering World War II. Designed as part of the standard military history text used at the United States Military Academy, the now two-volume set reviewed in the enhanced digital form is truly a tour de force of both academic scholarship and multimedia wizardry.*

The illustrations and cartography are simply outstanding, and like the first volume, the battlefield maps in particular are extremely well laid out and easy to read, always important when studying military history. The animated maps in the enhanced edition are even more superb, showing a click-by-click progression of selected battles with notes and highlights at key events.

In addition to the graphical wizardry of the animated maps, expandable objects and pop-out biographies of selected figures, the book packs a lot of academic material into fairly short and terse sections. Some notable topics included in this volume are a very well done section on the Soviet contribution to the final destruction of the Nazi war machine, going beyond the usual studies of Stalingrad or Kursk that form most of the usual Western narrative of the Soviet-Nazi death struggle.

This volume provides a really exceptional discussion of the Soviet destruction of Germany’s Army Group Center in the summer of 1944, an event that has often been overshadowed by Western-centric volumes focusing on the Allied invasion of Normandy and the race to liberate Western Europe.

Although much has been written about the failure of the Allies to close the Falaise Gap in August 1944 and destroy German Army Group B in the West, less has been written about the Soviets actually destroying an entire German Army Group that completed the drive to force the Germans out of Russia and back into the countries of Poland, Romania, and Hungary.

The evolution of the Soviet art of mobile warfare is very much on display in this section of the book, something long neglected in the study of World War II by popular histories.

The other interesting section is the discussion on the end of the war and the decision to drop the atomic bombs on Japan. The chapter lays out in workman-like detail the final months of the war and the conundrum the Allies faced planning the invasion of Japan in the face of the horrendous casualties incurred in defeating suicidal Japanese resistance on Iwo Jima and Okinawa, including the largest campaign casualties incurred by the U.S. Navy in the entire war. It hints at the tremendous sacrifices the Japanese militarists were ready to extract from the Japanese population to resist an Allied invasion and the inevitable decision by President Truman to use these new weapons to avoid what would have no doubt been the most complicated and costly amphibious operation in history.

Finally, the book goes far beyond traditional World War II texts by devoting an entire chapter to the post-war issues the victorious Allies faced, from the occupation and rebuilding of Germany and Japan to the challenges of war crimes trials, to the need to demobilize a huge military machine and transition soldiers back to civilian life.

These are topics usually ignored by histories that tend to stop on September 2, 1945 and their inclusion in this volume really stand out in making it a comprehensive undergraduate text for studying not just the war, but the challenges left for both the vanquished and the victors as they struggled to rebuild a world left in turmoil.

This fine two-volume set concludes with a thorough analysis of why the Allies won and why the Axis lost through the lens of economic power, the ability to wage successful coalition warfare, and the general ability of the Allies to develop the tactical skills to defeat their enemies.

Overall, this text should rightly become the standard undergraduate volume for any course studying World War II. The writing is sharp and incisive, the animated and audio-visual features will definitely appeal to the new generation of history students, and the range of topics covered gives a broad understanding of not only how World War II was fought, but why it occurred and what its long-term effects were on the post-war world it created.

*The Enhanced Digital Edition mentioned in this review is available exclusively from Rowan Technology at the West Point History of Warfare website.