West of Eden: An American Place 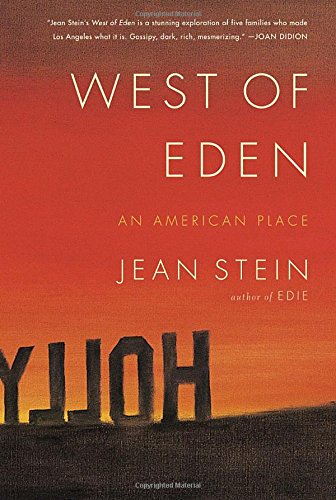 “In its own inimitable way, West of Eden is as epic as John Steinbeck’s novel East of Eden.”

Jazz age novelist F. Scott Fitzgerald, who lived and worked in Hollywood, reportedly told his contemporary, Ernest Hemingway, “The rich are different than you and me.” Hemingway supposedly replied, “Yes, they have more money.”

Now scholars claim Hemingway actually told Mary Colum—the Irish literary critic and friend of James Joyce—and not Fitzgerald, “I’m getting to know the rich.” And that she added, “I think you’ll find the only difference between the rich and other people is that the rich have more money.”

Still, Fitzgerald might have made the remark that’s been attributed to him. He certainly spent a lot of time around the kinds of people who made heaps of money.

In his novels, he romanticized the rich, except when he depicted them as hollow men and women, like Tom and Daisy Buchanan who smash things and expect others to clean up after them.

Fitzgerald would undoubtedly recognize the Los Angeles tycoons and Hollywood celebrities that Jean Stein—the author of Edie, American Girl and a former Paris Review editor—includes in her new book, West of Eden: An American Place, that traces five prominent Southern California families, including her own, who built Hollywood from the ground up and turned it into a legend renowned from Shanghai to Timbuktu.

Like Fitzgerald’s fictional characters, Stein’s cast of actors, producers and directors made heaps of money and boasted that they lived richer lives—fuller and more rewarding in every way—than the lives of the ordinary folks who cooked, cleaned, and served cocktails for them at the sort of lavish parties that Fitzgerald might have attended before he died in Hollywood in 1940 at the age of 40.

L.A. has always been a cruel place for novelists and young girls from provincial towns who aim to be starlets. In fact, from all the evidence that Stein marshals in West of Eden, money and success generated drug addiction, suicide, depression, and nasty divorces that have long been the stuff of gossip columns and Hollywood novels.

Butlers, mistresses, gardeners, and psychiatrists talk out of turn in these pages and take readers behind locked gates, hidden doors to lush boudoirs, and into dollhouses for children that are the size of real homes for working stiffs.

Like Edie—her portrait of Warhol insider Edie Sedgwick—West of Eden is oral history at its finest. Indeed, to write her books, Stein carries out extensive research, though she doesn’t hunker down in libraries. Rather, she conducts interviews with dozens and dozens of people, then cuts and edits in the manner of a movie director who cries out “lights, action, camera!”

Unfortunately, Stein doesn’t provide dates for interviews. Ring Lardner, Jr. shows up in these pages in several key places, but he died nearly 16 years ago, in October 2000. It would be helpful to know when Stein taped him and others, such as playwright (and Marilyn Monroe’s third husband), Arthur Miller, who died 11 years ago in February 2005, and who also makes a dramatic appearance in West of Eden.

Still, Stein allows Ring, Arthur, and the bad boys and girls of Hollywood, including James Dean and Jackie Park, to speak for themselves without inserting comments and adding reflections.

“I dated Ronald Reagan for three months and he never took me out,” Park says. “He was carrying a torch for Jane Wyman.” Of Cary Grant, she says, “The first time I ever had a date with him, he was dressed up as a woman.”

Like Studs Terkel—the consummate oral historian and the author of Division Street, Working, and The Great Divide—Stein stands in the background, though she shows up in the last chapter of this book in which she writes about her father, Jules Stein, a midwestern doctor who moved to California and co-founded the Music Corporation of America in 1937, and went on to represented Betty Davis, Frank Sinatra, and Greta Garbo.

The Stein name opened doors for Jean that probably would have remained closed to an outsider. There’s a backstory to this book that’s begging to be told, albeit no footnotes and no bibliography, though the author provides a long list of the 100-plus people she interviewed, along with capsule biographies that help a reader navigate the complex cast.

Traditional biographers and dogged scholars enthralled by facts, figures, and legal documents tend to look down on oral history because, as they point out, memory is flawed and fallible. Sources often don’t remember accurately.

West of Eden is not a substitute for a reliable cultural history of Hollywood, but it’s a rich source book for historians, biographers, and novelists. There’s plenty of information about the investigation of Communists in the film industry and the Hollywood blacklist, depicted recently in the biopic Trumbo.

Radical historian Mike Davis, the author of City of Quartz and Ecology of Fear: Los Angeles and the Imagination of Disaster, opens Stein’s book with his own memories of the place he loves and hates. Naomi Klein, author of This Changes Everything: Capitalism vs. the Climate, tells a nuanced story of her own family in Hollywood.

On every page, the detail is rich and rewarding and the chorus of voices comes alive. Then, too, West of Eden adds to the already extensive picture of the vital role that Jews played in Hollywood.

Want to write fiction about Los Angeles in the 1920s, or the 1930s, 1950s, and 1960s? Then read West of Eden for the sections about oil magnate Edward Doheny, movie producer Jack Warner and actress Jennifer Jones, who was born Phylis Lee Isley, married producer David O. Selznick, and gave birth to Robert Walker, Jr. who steals the show in Hitchcock’s Strangers on a Train. What’s more, Jones outlived her own daughter, Mary Jennifer, who committed suicide by jumping from the  20th floor of a building in Los Angeles.

Though she has spent much of her life in New York and has written more about the East and Easterners than the West and Westerners, Stein returns here to her native California and joins a select circle of writers, including F. Scott Fitzgerald, Nathaniel West, Raymond Chandler, John Steinbeck, and Joan Didion who have recorded the idioms and gestures of the Golden State. In its own inimitable way, West of Eden is as epic as John Steinbeck’s novel East of Eden.