Weird Love: You Know You Want It 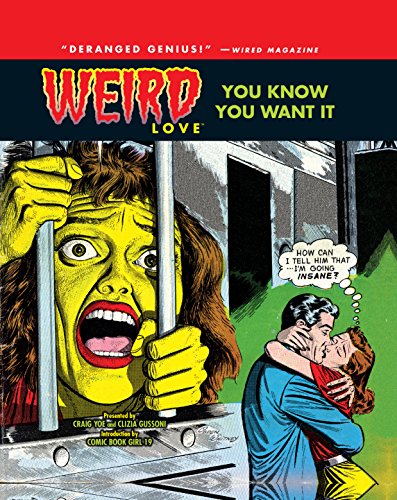 Anyone who can figure love out is a genius.

When Shakespeare wrote about love a thirteen-year-old girl killed herself over the loss of it. When Roy Orbison sang about love he was crying. When Jack Kerouac wrote about it was wild, crazy, and filled with abandon. When James Baldwin wrote about it love was a battle . . . growing up . . . a war.

When comic book authors write about love they speak of the obsessive torture of falling in love with a Commie. They write of being too fat for love. They tell cautionary tales of two wayward girls, a woman who accidently became an escort, and about being a slave to despair.

In the fifties, when comic book writers really started to write about love they sold millions of issues. Weird Love: You Know You Want It is a wonderful and wildly entertaining collection of romance stories that originally saw publication in the fifties through the seventies.

Yes, these are some of the craziest and weirdest love stories you will ever read. It is impossible to read many of these and not laugh out loud at some point. Every story in here is one hundred percent high fun.

Because in the end, no matter when you are alive, love itself is just crazy and who can’t relate to that?

The titles say it all. I Fell for a Commie. Love of a Lunatic! Yes, I Was an Escort Girl! There’s No Romance in Rock and Roll! You’re Fired, Darling! Gangster’s Girl! Almost every single one of them truly needed that exclamation point found at the end. For the urgency of love, the obsessiveness, the insanity of love itself is captured on every single page of this terrific anthology.

The stories have been chosen for their absurdity in relation to modern values. But in many ways this is also a very important social document. Without blinking an eye a smart college professor could easily incorporate this as a text in class devoted to the changing morals of society.

This anthology highlights the way that the power structure of the time defined love for the country that bought their books. These stories, to the best of my knowledge and from Yoe Book’s well- researched credits on each story, were written by middle-aged white men. The idea of love and romance and sex and relationships is naturally filtered through their eyes, their standards, their morals.
Like the smartest of writers they wrote about what they knew. Or to be more specific, they wrote about what they thought they knew.

Some who read this collection will doubt that these standards, the morals put forth, and the behaviors exhibited in these stories were ever part of real life. Even for back then. The fact is that for millions who read them, they essentially were. The sheer volume of romance titles that sold during this period says something about the state of this country. As well as the mindset of the people who bought these books.

Stories such as those featured in this volume are how many actually perceived relationships between the sexes.

In The Taming of the Brute in, a woman accepts a date with a known bully and heartless cad. If only she could change him, then everything would be perfect. Over time she does, but once they are married she is thrown over his knee and a good hearty spanking reminds her exactly who is king of the castle.

Mr. Childers runs the office featured in Mini Must Go. He has a big problem. He can’t work because he is constantly distracted by these pesky women and their incredibly revealing mini-skirts.

In response he issues memo after memo. First banning those skimpy skirts and then even half-revealing skirts. As he does he loses friends, employees and the respect of those around him. It is only when his secretary tells him that she has been “turned on” by him since the first day that she worked there that he comes to his senses.

The romance comic occupies an important place in the history of medium. It would have been easy for Clizia Gussoni and Craig Yoe give a concise and accurate picture of the period in comic history that gave rise to the romance comic.

They take the reader past the simple “superheroes were out and romance was in” narrative. They write about failures in distribution, the rise of television in the homes (especially the soap-opera), the Senate investigations and the subsequent advent of the Comics Code Authority, and sudden availability of easily affordable paperback books.

The artists featured include some of the best of the day. This includes Ogden Whitney who is one of the greats of the Silver Age of comics. He regularly drew memorable horror and sci-fi tales for the American Comics Group and also did westerns for Marvel. Most famously he created fan favorite Herbie Popnecker and worked on T.H.U.N.D.E.R. Agents.

The people who drew these stories knew how to titillate the audience. In You Also Snore Darling! Jose-Luis Garcia-Lopez manages to strategically place an arm over a bikini top creating the illusion that the woman is topless.
To paraphrase David Byrne. Lori Anderson, Martin Mull, Frank Zappa, and others, “Talking about love is like dancing about architecture.”

This is some fun architecture.