The Weekend That Changed Wall Street: An Eyewitness Account 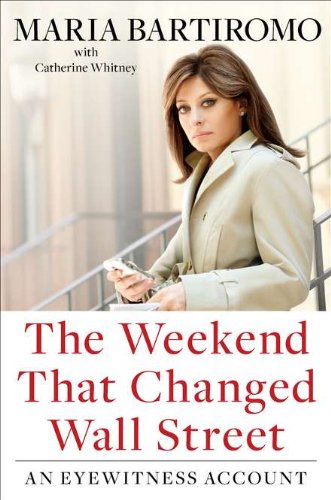 “I have always preferred,” wrote the French 19th century author Anatole France, “the folly of passion to the wisdom of indifference.”

For months now we’ve been reading one passionless analysis after another about the collapse of investment bank Lehman Bros., and the subsequent onset of the financial crisis. We’ve had a silly “Lehman Light,” and a really interesting “Lehman for Intellectuals,” and an unutterably dull “Lehman for the Beltway Crowd.” We’ve even had a good laugh about “Lehman for Rednecks.”

Maria Bartiromo, on the other hand, plunges us into the passions and drama of the financial crisis. Her book is a colossal schmoozefest with all the characters who mattered during the months of crisis. Imagine being invited for a nosh to Elaine’s or 21 with the most important bankers and politicians in the world, who are all too happy to answer your questions about how events played out between August 2007 and March 2010 (the book takes us right through the Greek sovereign debt crisis in Europe).

It’s an intelligent and entertaining approach, one that seems to come naturally to a skilled interviewer as we’ve seen Bartiromo prove in her afternoon show on CNBC. Bartiromo gives only a cursory analysis of the events and devotes her book to the personalities that shaped them, their motivations, and their characters.

Here is former Treasury Secretary (and former Goldman Sachs CEO) Henry Paulson: “Paulson was the epitome of a Wall Street man. . . . A Christian Scientist and a family man, he was a quiet though influential player in corporate America long before becoming secretary. . . . They had all done deals with Paulson in the past, and they knew that he never showed his gun without using it.”

Or current Treasury Secretary Timothy Geithner: “Geithner wasn’t a product of Wall Street. His rabbi was former Treasury secretary Robert Rubin . . . he’d spent his entire career in government and quasi-government positions. . . . In a crisis, Geithner made a good partner for Paulson, who was known to be emotional and passionate.”

The drama begins on September 12, 2008, with the meeting at the New York Federal Reserve Bank of Paulson and Geithner with the major Wall Street bankers, in an effort to save Lehman Bros. Bartiromo takes a Barbarians at the Gates approach to the drama, following the characters’ interactions and what was going on in their heads. She has the advantage of filling out her personal knowledge of the characters, with the superb network of sources she has built up during her 15 years at CNBC.

“One observer painted a remarkable picture. . . . ’I looked at Jamie Dimon [JPMorgan Chase CEO] sitting across from Lloyd Blankenfein [Goldman Sachs CEO] . . . those two were the giants in the room, and they hated each other so much it was impossible to believe they were sitting there. . . . But they were very good, very willing to cooperate. . . .”

Bartiromo takes us back through the real estate crisis that led to the credit crunch, always with superb portrayals of characters like Angelo Mozilo, former chairman of Countrywide Financial: “. . . the rough-hewn son of a butcher from the Bronx. . . . Mozilo was the Crazy Eddie of the housing market. No deal was impossible. . . .”

Then she takes the reader through the day-by-day events in the efforts to save Lehman, with close looks at how the major players like Bank of America’s former chairman Ken Lewis, or Lehman’s one-time CFO Erin Callan all fit into the unfolding events. There is a particularly well-developed portrayal of the role Morgan Stanley CEO John Mack played in the ongoing drama.

Some of the dialogue in the book is a bit simplistic—this tends to be where characters’ thoughts are described instead of their words being cited. “Barclays Capital President Robert Diamond thought: ‘What an incredible opportunity!’“ Where is the editor? Has this role entirely disappeared from the publishing industry? Perhaps it is time to hire a few?

The book ends with some good quotes from the major characters about financial reform and the future of the economy; and what is remarkable is the tremendous variety of points of view that the book encompasses. There is really no consensus of educated opinion about how to emerge from a crisis in which nearly a quarter of the country’s existing wealth was destroyed.

Policy has never seemed less effective, yet the economy continues to function and we have not seen another Great Depression. All the forces of capitalism are still here; they are just in the midst of a major restructuring.

One thing The Weekend that Changed Wall Street does do is to give the reader a great sense of the brains behind the bucks. That assurance will perhaps be one of its most important contributions.

We need that assurance badly. Because, recently, as European Union President Hermann van Rompuy put it, “You have the sense that everyone has been asleep at the wheel.”