A Web of Air: Book 2 in the Fever Crumb Series 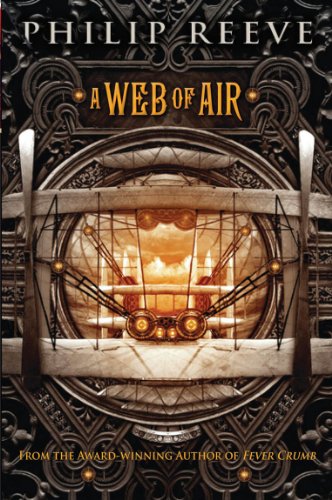 “Fever is an engaging heroine, intelligent yet oddly naïve in the ways of life. Mr. Reeve is a talented world-maker and first-class storyteller. What more could a reader ask for?”

The brilliant Philip Reeve has once again gifted readers with a delightful new tale. A Web of Air, the second book in the Fever Crumb Series, is set in a distant dystopian future that is so devolved it suggests medieval England all tricked out with touches of ancient (meaning today’s) technology.

While we don’t know for sure, it seems much of the world was destroyed long ago by climate change, nuclear war, earthstorms, and plague. America is believed to be a wasteland, although a transformed Europe has survived. Popular lore says mankind was justly downsized.

Fever is the only female member of London’s Order of Engineers, an elite few who struggle to learn what they can of knowledge long lost. In the first book, Fever, who only cares about rationality, is sent on assignment to help an archeologist identify some newly unearthed technology. She’s soon embroiled in irrational conflicts not of her making, and escapes London in a traveling theater with two children she rescues. The wheeled theater trundles to the city of Mayda where the troupe performs plays to entertain the residents. Fever adjusts—in her own way—to the irrationality of theater life, and cobbles together the only electrical stage lighting seen in any theater.

Mr. Reeve, who expertly creates new worlds, has built Mayda on the inside slopes of a giant crater along a coast. Homes and shops ascend and descend the inner cliffs on funicular rails counterweighted by massive water tanks according to the time of day or the wishes of the inhabitants.

Along one of these vertical pieces of property Fever encounters the mysterious young recluse called Arlo Thursday. Arlo’s only companions are angels, large gull-like mutated birds with human DNA in their genes. The birds, while not too bright, can speak, and they sport fingers on the tips of their wings.

It’s rumored throughout Mayda that Arlo is working to build a flying machine. When Fever discovers a sophisticated paper glider near his home, she tracks Arlo down to convince him that he needs an Engineer such as herself to complete his work. Some people don’t much care if Arlo succeeds or not, but other groups have their own agenda.

Followers of the Sea Goddess cult say it would be sacrilegious for man to fly once more. The Oktopous Cartel wants to seize the flying machine and use it as a military weapon to wrest control from others. And London’s Engineers want to destroy it because flying conflicts with their plan to put the entire city of London on wheels so it may roam freely across the land. Ruthless enemies are prepared to kill Arlo and Fever to possess the secrets of flight.

A man who Fever believes is her friend betrays her, and she escapes with Arlo and his half-finished flying machine to the Ragged Isles, a group of small islands off Mayda where Arlo’s father once built ships. All of Arlo’s family and their holdings were destroyed by a giant wave years ago, and only scattered ruins remain. Arlo and Fever set to work building the flying machine on the top of a wrecked tower. Arlo fails at the first attempt to fly it because he is too big and the old engine powering the craft is too heavy. Fever strips down an automated creature similar to a spider that has guarded Arlo and his family for many years and removes its power source. The lost technology proves to be a small egg-like device that Fever inserts into the plane. She will fly the lightweight craft with its new engine.

Fever and Arlo believe no one can find them, but one of the angels tells a Cartel member where they are in exchange for lovely snacksies. He just doesn’t know any better. Will those who crave the flying machine succeed? “Floatyboat! Big floatyboat,” the watching angels scream in warning.

The story careens to an exciting and surprising conclusion.

Fever is an engaging heroine, intelligent yet oddly naïve in the ways of life. Mr. Reeve is a talented world-maker and first-class storyteller. What more could a reader ask for? How about the quick arrival of the third book of the series, Scrivener's Moon, now available in the U.K., but sadly, not yet in the U.S.