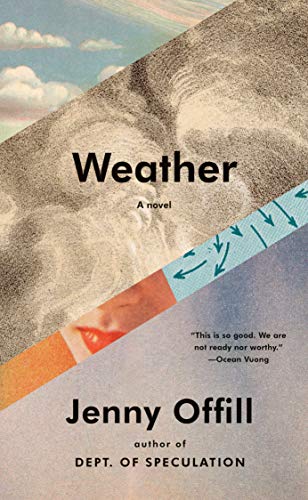 “Weather is a well-crafted, profound, unsettling, and deeply resonant work.”

Jenny Offill may very well have chosen the perfect title for her novel Weather. For her book, which lacks much of a traditional plot, is about climate change, the mood or atmosphere of the world at large, and the narrator’s smaller world, namely her family and friends. The weather of the novel covers both the profound and mundane. But the pervasive mood is that of anxiety, sprinkled with some drops of humor.

The plot, such as it is, narrated by Lizzie, a graduate school dropout who now works in the university library and answers emails for and travels with for her former mentor Sylvia, who hosts a climate disaster podcast called “Hell and High Water,” about which Lizzie wryly and accurately comments: ”Guaranteed to attract the end-timers.” The narrator interweaves bits about her husband Ben, her son Eli, and her drug-addict brother Henry along with doomsday letters in response to the podcast, information about climate change, survivalists, the 2016 election, observations about people in her neighborhood, the university library, and friends.

Weather is constructed much like Offill’s previous novel Dept. of Speculation with blocks or snippets that range in length from a few words to a paragraph or two. These building blocks include everything from the narrator’s short response, “Oh my, I said,” to another parent from her son’s school or a brief exchange with her brother Henry: “’You have to help me Lizzie,’ my brother says. ‘I am,’ I tell him. ‘I am helping you.’ I sit him on the couch, put on My Strange Addiction and emails to ‘Hell and High Water,’ such as: ‘Smaller people tend to live longer, one scientist says. They use less fabric for their clothes, less rubber for their shoes and they fit into airplanes better.’”

The stream of consciousness narrative is deliberately and cleverly constructed. When describing the nature of her relationship to her brother, the narrator says the right “word” is “enmeshed,” which applies to the narrative structure and themes of Weather. For Lizzie, her personal life and the crises of the 21st century are deeply enmeshed. Her son’s future, her marriage, and her brother’s health are inseparable from the state of the earth. For how can one raise a child and sustain relationships when the world may be uninhabitable in the near future? In one paragraph Lizzie “enmeshes” many of her anxieties: “Eli is at the kitchen table, trying all his markers one by one to see which still work. Ben brings him a bowl of water so he can dip them in to test. According to the current trajectory, New York City will begin to experience dramatic, life-altering temperatures by 2047.”

Although to some degree, Weather preys on many of our present-day anxieties and concerns, it is not utterly without hope or humor. In fact, Offill’s dry wit diffuses some of the tension in her novel and makes its painful subject matter bearable. Weather is a well-crafted, profound, unsettling, and deeply resonant work. It’s a good thing that COVID-19 did not exist when Weather was written.