We Were Rich and We Didn't Know It: A Memoir of My Irish Boyhood 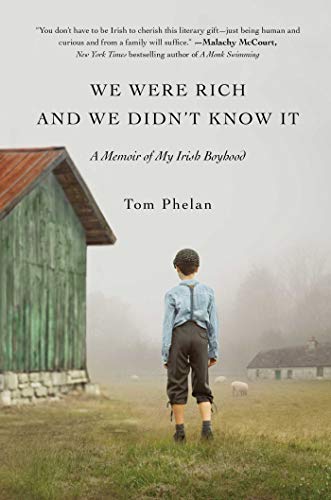 Seán O'Casey wrote about his boyhood in a memoir titled, I Knock at the Door. James Joyce fictionalized his own boyhood in Portrait of the Artist as a Young Man. Brendan Behan recounted his own youthful woes in Borstal Boy.

Now the Irish-born novelist Tom Phelan describes his early years in We Were Rich and We Didn’t Know It, subtitled A Memoir of My Irish Boyhood.

Phelan’s book has a lot of charm going for it, though the narrative tends to fall apart in the last portion and to become a series of portraits.

The author tells a story about how a boy became a man. Phelan himself joined the priesthood, left the priesthood, moved to New York and became a writer, but he doesn’t take his own story that far.

He writes exceedingly well about his parents, especially his Dad, JohnJoe, who raised cattle and pigs and taught his son valuable lessons.

The Phelans were well off by comparison with other, neighboring families, though they didn’t have a lot of material possessions or live in comfortable surroundings.

“Compared to many of my contemporaries, I came from a rich family,” Phelan writes. “But the material things and the good times this richness allowed came at the cost of incessant work.”

One can understand why he became priest, moved to New York and became a writer, not unlike his countryman, Frank McCourt, the author of the bestseller Angela’s Ashes in which he writes about his childhood.

Like that book and like O’Casey’s memoir, Phelan writes about a particular time and a place, Ireland in the mid-20th century: his own village, his school, his parent’s farm, the coming of the automobile, the Catholic Church and its priests.

If there was any bad behavior, Phelan doesn’t let on. The worst individuals in this book are the author’s schoolmates who tease him because he’s a country lad and doesn’t know urban ways.

At the front of this book Phelan explains that, “some of the dialogue has been re-created.” Still, it doesn’t feel forced. Indeed, the expressions are colorful. Many of them are worth of the price of the book itself. There’s “Went toes up,” which might be obvious, as is “happy as a spinster’s spaniel.”

Phelan’s dad tells him not to answer any questions about the family farm. Accordingly, he says, “I don’t know” when he’s questioned. His interrogator tells him, “It’d be easier to get a fart out of a dead ass than get an answer out of you.”

We Were Rich feels authentic, conversational, and casual, though it might have been worked over many times. Phelan mostly sticks to his own story and the story of his Dad, though occasionally he makes big statements about the Irish and Ireland.

“Perhaps from an age-old practice of evading the British excise man, the Irish are secretive about their wealth or the lack of it,” he explains.

Whether you’ve been to Ireland or not, We Were Rich is a wonderful introduction to an Irish boyhood and to a way of life that doesn’t exist anymore. It’s a perfect gift for St. Patrick’s Day or any other day of the year.