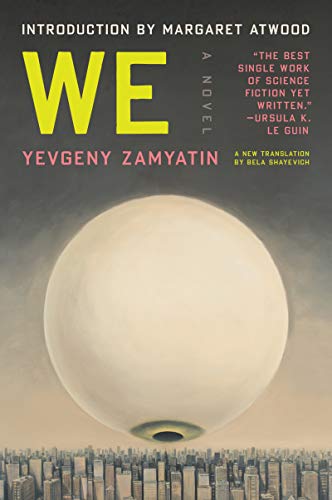 Lovers of drama and citizens worried about politics should read this book that probably inspired and influenced Brave New World and 1984.

We is surely one of the greatest dystopian novels and works of science fiction ever published. This is the opinion of three distinguished authors whose views are included in the Ecco edition—George Orwell, Ursula K. Le Guin, and Margaret Atwood.

Written during the Russian Civil War in 1919–1920 by a Russian engineer, We in 1921 may have been the first book manuscript barred from publication by Soviet censors. Undaunted, Zamyatin smuggled the manuscript to E. P Dutton in New York, which published it in English in 1924. There have been several other translations in English and other languages over the years (some available at Amazon), but the book was not published in the Soviet Union until 1988, thanks then to President Mikhail Gorbachev’s policy of “openness.” The Ecco edition was skillfully translated by Bela Shayevich.

Set several centuries into the future, the action in We takes place in the ONE STATE that triumphed after a 200-year war against freedom-loving savages., some of whom remain in the wilderness outside the green wall that encircles the city ruled from the top down by an all-powerful great BENEFACTOR. (All official language is in capital letters.) Its denizens have no names but are given a number at birth. The “numbers” are taught that freedom = unhappiness and that the good life lies in following the established order.

The main protagonist is an engineer who is the master builder of a spaceship that is intended to bring the ONE STATE way of life to ETs on other planets. He is authorized to copulate with two females when they bring him a pink ticket. One female is soft and sentimental; the other, tough and angular. But each has feelings, and their feelings penetrate the master builder and sometimes interfere with his work and even with his sleep (a crime). . .Near the end of the story, he discovers he has a soul and imagination—a danger to himself and to the BENEFACTOR’s order. The engineer and his two female associates risk their lives by deviating from the rules of the system.

All the action takes place within the parameters of the ONE STATE system. But the story is full of life. Each of the main characters has recurrent bouts of internal stress—cognitive dissonance—as they veer from what they have been told to what they feel. Lurking in the background is the knowledge that the Benefactor’s Guardians are everywhere and seem to know all that happens. Deviation is punished by torture and execution.

As a young man Zamyatin joined the Bolshevik Party. In 1916–1917, however, the Tsarist government sent him to England to fabricate an icebreaker. He returned to Russia shortly after Lenin’s Bolsheviks gained power. Their brutal actions inspired We. Remarkably prescient, the book anticipated the policies of Stalin, Hitler, Mao Zedong, and Castro; also, those of Vladimir Putin and Xi Jinping. It also posts signals about the future of the United States as many Americans continue to be brain-washed by certain politicians and their acolytes in the media.