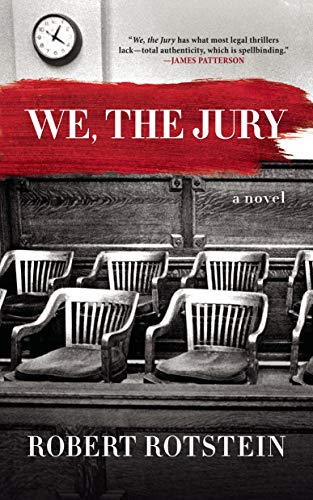 If you have never taken part in a criminal trial, did you ever wonder what actually happens? We, the Jury takes an inside peek into all aspects of a fictitious murder case.

David Sullinger is on trial for brutally bludgeoning  his wife Amanda with an ax. His allegedly abusive wife Amanda, who is much older than he, supposedly  seduced him at age 17 when she was his teacher. They later married.

For the almost 21 years of their marriage, David had been in the position of a "house husband" parenting their two children, son Dillon and daughter Lacey, while Amanda worked and paid the bills. Now teenagers, the two are called as key witnesses.

Dillon is a surly young man who stipulates his father was the abuser, not his mother, but his declaration doesn't count for much as he comes across as either high or drunk with a bad attitude.

Lacey's testimony, which seems rehearsed, is more credible as she reports about their horrendous home life and how Amanda always badgered David as well as Dillon. Her love for her father is evident as she vehemently denies her father premeditated her mother's death.

David admits to Amanda's constant violence toward him and says he feared for his life when the slaying took place. His defense attorney, Jenna Blaylock, is calling this a justifiable homicide due to self-defense.

Jenna, a well-groomed, young, and confident lawyer, claims to have never lost a case and prides herself on this fact. She is very charismatic and knows how to manipulate those to agree with what she believes.

Meanwhile, the prosecutor, Jack Cranston, presents as unkempt and rumpled, which is not a good sign if he wants to prove the defendant is culpable for this crime. This soon becomes a game of who can woo over the jury to their side of thinking.

Judge Natalie Quinn-Gilbert, who is still grieving from the loss of her beloved husband, pulls a major faux pas by stating David is in fact guilty. She then tries to cover up her mistake by having her comment stricken from the record, but once heard, her words cannot be forgotten.

After a tedious month, the trial is over and it is now up to eight jurors to make a decision whether to convict David or set him free. Should they believe his daughter who is adamant about her mother being a horrible person who abused not only David but her brother, too? Or is David's son to be believed by his loathing and ambivalence of his father and dealing with the shock of his mother's death? Could David really have been battered, or was killing Amanda an excuse to make a claim to her assets?

The differing jurors gather in seclusion to decide David's destiny. Each embraces their own agenda and offers contributions regarding their thoughts and beliefs. In the beginning, they unanimously come to a conclusion on David's fate and seem to be in agreement, yet further dialogue compels them to ask to for a second look at some parts of the testimony.

A gripping novel, We, the Jury offers an inside look into the judicial system and how each character reacts to a legal situation. Their own personal lifestyles and events cause them to think hard and then think again upon realizing the significance of holding someone's life in their hands.