We Eat Our Own: A Novel 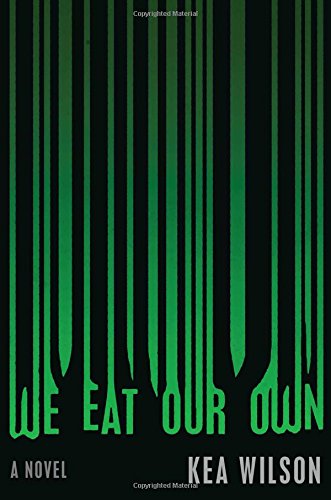 “We Eat Our Own is lyrical, engrossing, and emotionally compelling.”

Inspired by the 1980 Italian cannibal exploitation film, Cannibal Holocaust, Kea Wilson has created a literary novel that manages to maintain tension and evoke a sense of dread that hangs in the air like humidity, all while exploring the obsessive passions of the numerous characters. We Eat Our Own is a tapestry of character studies, the personal lives and internal struggles just as interesting, if not more so, than the threat of guerilla warfare, cartel gangs, and the constant danger of death in the Amazon.

Adrian White is a struggling actor with a habit of bailing on his girlfriend to accept roles that never seem pan out or pay. Against his instincts, he agrees to shoot a film in the Amazon with enigmatic Italian filmmaker Ugo Velluto. There is no script, and as Velluto’s manic vision for his pièce de résistance begins to demand more from the crew and extras, accidents begin to plague the set and tension builds to a fever pitch. Meanwhile, in the jungle surrounding the town, a guerilla faction known as M-19 builds a fragile and dangerous alliance with the local cartel.

We Eat Our Own is a concept novel that manages to avoid feeling like an ill-conceived gimmick, pulled off with precision due to Kea Wilson’s extreme skill with language, description, and character development. Her ability to create three-dimensional, sympathetic characters shines thorough and keeps the reader engrossed, despite the lack of plot cohesion between the different character threads.

The prose jumps between different points of view and different tenses, giving each character their own background and story, while highlighting the main protagonist with much more emotional depth. Each character is fully fleshed out, his or her story independent of the novel, yet a part of the events that culminate in an ending that is slightly anticlimactic, but powerful and satisfying to the character arc.

In chapters where Adrian White’s character is present, the prose is in the second person. The point of view adds a layer of proximity to Adrian’s character that could so easily come off as false if not written so well. The bulk of the novel is also told in the present tense, which usually creates distance between the reader and the characters. In We Eat Our Own, the interaction becomes even more intimate by getting into Adrian’s head and highlighting his interactions with other characters, not just the action in the scene. In other words, this is a present tense novel done right.

Through well-placed description and exemplary use of language, Wilson has made the Amazon jungle itself a character that, in the end, seems to be the real antagonist of the novel.

Wilson creates a backdrop that gives the reader a sense of culture shock through liberal use of foreign language and setting, and adds a well-placed dose of history and politics. Wilson then drops the protagonist in an isolated jungle where culture doesn’t matter and everything can kill. Mother Nature is the great equalizer.

Adrian White, Ugo Velluto, or any of the crew, are at risk of falling victim to the savagery of the cartel or guerilla soldiers in the neighboring town. Or any chracter might fall out of their boat and get eaten by sharks, or simply get an infection from the water and die.

The film crew’s isolation in the jungle reflexively causes tension and anxiety in the reader as the film director becomes lost in his vision and endangers the crew, obsessed with creating cinema that transcends “exploitation” and becomes art. Adrian is obsessed with becoming an established actor, his feelings of inadequacy smothering him. Marina and Juan Carlos, the two M-19 guerillas, are lost in the passions of their revolution and their maturation from students to murderers. Each character becomes consumed by himself or herself, and then gets immersed in a jungle that can literally devour them.

Among the many interesting stylistic choices, Wilson has reinvented the dialogue wheel, opting to not use quotation marks and only sparsely utilize dialogue tags. At times it could be jarring. However, the unique formatting flows well and creates a more seamless read that further immerses the reader.

In the hands of a less skilled writer, this novel would have been a pretentious mess, but Wilson executes it perfectly. We Eat Our Own is lyrical, engrossing, and emotionally compelling. This level of skill for a debut novel is, to say the least, impressive and shows promise for Kea Wilson as an emerging literary talent.