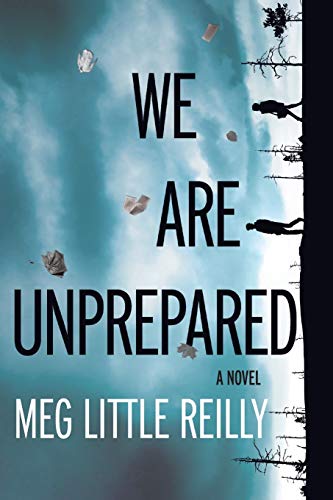 When the seemingly inevitable monster weather event occurs, how prepared will we be? We Are Unprepared is the unequivocal answer from debut author Meg Little Reilly.

After purchasing their dream home in rural Vermont, millenials Ash and Pia make the big move from their trendy Brooklyn walk up. Very quickly, predictions of a monster weather event, referred to throughout the novel as The Storm, stat wreaking havoc on their marriage and their community. While Ash aligns himself with local government in an attempt to prepare the community for the onslaught, Pia finds refuge with preppers in the area.

Community members, used to extreme weather conditions, are split on how much preparation above their norm is necessary. Ash and Pia find similar rifts forming in their own relationship as differing concerns reveal how unalike they really are.

Meg Little Reilly, a former White House staffer and Environmental Defense Fund communicator, has drawn from her own experiences in these areas to craft a novel that reads as much like a love letter to the ecology of her native Vermont as a serious cautionary tract about the dangers of global climate change. She peppers her story with environmental facts and statements from experts in the field, and makes use of her own knowledge of the area in an attempt to ground the story in reality. This part of the story is interesting and compelling.

Unfortunately, the story itself drags. There is a lot of wine drinking and talking about being ready, but not a lot of action. The Storm (that title becomes wearying very quickly) itself doesn’t come into play until the last third of the book, and its treatment is incredibly perfunctory.

Reilly instead chooses to focus on Ash’s inexplicable obsession with a neighborhood child and his attraction to a neighbor. Neither Ash nor Pia are interesting or likeable. They whine and drink wine, thinking themselves superior to their neighbors. Both talk a lot about The Storm but do very little aside from talk.

As a metaphor for their marriage, The Storm was workable, if handled a bit clumsily. As it exposed the cracks in community preparation, it also exposes the cracks in their relationship. After meeting each character, though, one is left wondering what initial attraction brought them together. Pia is pretty, but clearly unbalanced even before The Storm. Ash is condescending from the get go. Where did these people come from?

More importantly, why should we care?

Reilly doesn’t come up with a compelling answer to that question. She does, however have an interesting grasp of climate change and why it should matter to everyone, and that portion of her novel is well handled.

Come to We Are Unprepared prepared to receive vital information dispersed in an interesting manner. Just don’t look to the protagonists for anything useful. They’re tapped out.