We Are Monsters (Fiction Without Frontiers) 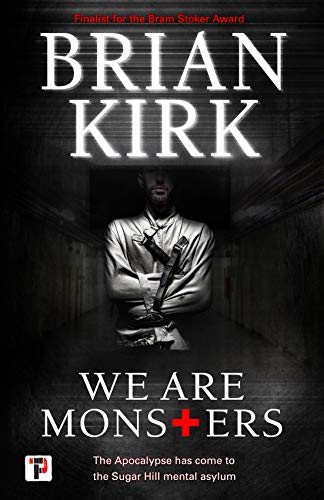 “Evil is all around us. You’ve taken my defenses from me and forced me to let it in. Now you’ll see where it lives inside each of you.”

Dr. Alex Drexler has developed a cure for schizophrenia. The only problem is that the effects aren’t permanent.

Alex’s brother, Jerry, is an inmate at Sugar Hill Asylum. He has good days and bad ones.

“The world is illusion; we only pretend it’s real. Pills provide an artificial filter, a murky lens through which the world assimilates itself. It’s nothing more than a false representation of the way the world should look according to the makers of the medicine.

Jerry didn’t know which was better. The chaotic view behind the veil or the sights supplied by the fabricated filter.”

In a fit of desperation, egged on by the Board of Directors at Sugar Hill Asylum who dangle the position as next Chief Medical Director as an incentive, Alex experiments on his brother.

The injection works. Jerry appears, for all intents and purposes, cured. Everyone is astounded, even the current Director, Eli Alpert. Then something goes terribly wrong, and Jerry is dead, and Alex’s own position as well as the prized offering, are both in jeopardy.

Fate, however, offers a solution.

Crosby Nelson, a convicted serial killer, is admitted to Sugar Hill. Alex is to treat him, using his new drug. If it works, his position, and Sugar Hill’s reputation will be made.

But as we all know, things don’t always work out as planned, especially desperate plans.

Crosby Nelson may be cured, but he’s also gained something else along with his sanity.

“Dr. Drexler says my sickness was a trick my brain played to protect me,” Crosby paused. “It’s not like that. My illness protected me, but not from prior traumas. It allowed me to see things others can’t.”

Crosby can now manipulate reality, and he’s decided to reform it into his version of how the world should be.

From the moment Alex Drexler accidentally runs over his wife’s dog, and “using the blood as a mirror, he practiced a concerned expression before facing his wife,” the reader will mark him as a high-functioning sociopath. From that sentence alone, the good doctor is seen as caring for no one but himself.

As are all the others in the story. Each may be somewhat concerned with those under their care but in the end, it’s the One and Only who’s most important to each of them.

That is a first impression only, for as the story progresses, the reader learns how everyone got to where he is, what they endured to get there, and perhaps no one is as bad as he initially seems.

Nevertheless, there is always an air of instability floating through the story, a thread of mad folly crouching, waiting to be unleashed.

Could it be that those running the asylum are merely inmates who’ve so far managed not to be recognized as such?

Once Crosby Nelson is administered the so-called miracle drug, the story degenerates into a maelstrom of dementia similar to the dream sequence in the great British horror film Dead of Night, with no relief in sight for anyone but he to whom that particular reality belongs—Crosby himself.

“Evil is all around us. You’ve taken my defenses from me and forced me to let it in. Now you’ll see where it lives inside each of you.”

Disturbing, frightening, there’s nevertheless a thread of hope running through the story. If we are monsters and we can recognize that fact, perhaps the monsters can be subdued.

We Are Monsters is a Bram Stoker award nominee and has been optioned for film development. It will be interesting to see a Hollywood interpretation of this debut novel.