We Are Many: Reflections on Movement Strategy from Occupation to Liberation 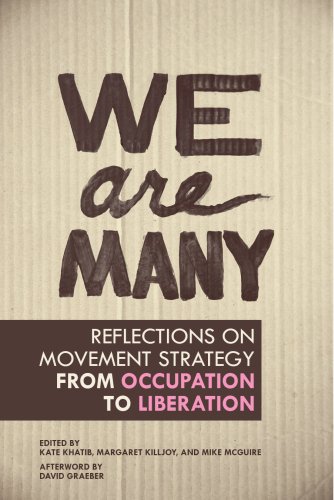 “The elements of Occupy Wall Street defy ‘simple categorization—they don’t fit into neat little boxes. The great thing about Occupy is that it reminded us that we don’t either.’”

The Occupy Wall Street movement, initiated around the 10th anniversary of the events of September 11, 2001, and the latest expression of the revolutionary spirit that is the foundation of the United States of America, resonates with Thomas Jefferson’s observation, “I hold it that a little rebellion now and then is a good thing, and as necessary in the political world as storms in the physical.” We Are Many chronicles many aspects of this multifaceted rebellion.

Occupy galvanized its adherents in pursuing political power and articulating a way of interacting in pursuit of sometimes shared, sometimes conflicting aspirations. To this end, “Political power lies not in moments of spectacle alone, but rather in the ability for a constituency to struggle collectively to participate in decision-making processes that affect their lives.”

The Statement of Autonomy of the General Assembly at Occupy Wall Street, approved on November 10, 2011 and revised on March 3, 2012—consistent with David Graeber’s assertion, “social change doesn’t begin by someone mapping out a program. It begins with visions and principles”—proclaims, “Occupy Wall Street is a people’s movement. It is partyless, leader-less, by the people for the people . . . it is not for sale. We welcome all, who come in good faith, petition for a redress of grievances through nonviolence. We provide a forum for peaceful assembly of individuals to engage in participatory democracy. We welcome dissent.”

We Are Many addresses seven major themes: Whiteness and the 99%; Research Destroy Plaza Riot Commune, Declaration of the Occupation of the City of New York, Solidarity in Practice the for Street Demonstrations, Occupy Oakland: Statement of Solidarity Against Police Repression, Occupy Wall Street Community Agreement, and Occupy Wall Street Statement of Autonomy. From a half dozen to as many as a dozen commentaries are included for each of the seven themes.

The motivation for the occupy Wall Street is to advocate for “those many in the United States who would once been employed in mass industrial production to actually make the commodities that are invented by the few are no longer needed. Production has slipped the national leash; it now takes places in pockets of the world that are “export processing” or “free trade” geographies of wage arbitrage in benefit of Finance. The U.S. working class has been rendered disposable—unnecessary to political economy of accumulation.”

This book illuminates how any encounter and activity can be a learning experience, for “In the United States, we are often encouraged to believe that our individual situations are the result of our own choices, but Occupy Wall Street has re-introduced and started to popularize the understanding that our situation is the result of economic, social, and cultural circumstances that are systemic. Our struggles as workers, immigrants, activists, and organizers are deeply connected.”

The Occupy slogan “occupy everything demand nothing” is layered in multiple levels of meaning, nuance, complexity, as reflected by the conclusion “in global terms, what we did there was simply reproduce a miniature version of the great occupied squares . . . that had marked revolutionary ferment in 2011. In American terms, we created a symbol that largely undid everything that both sides of the War on Terror had attempted to create: a world where politics was reduced to a matter of violent demagogues, would be superheroes and supervillains, commando teams, conspiracies, torture chambers, religious absolutism, and improvised explosive devices.”

But while Occupy adopted the nonviolence tactic that Mahatma Gandhi so effectively employed in his political/spiritual campaigns, lacking the celebrity power of that Great Soul, the power of nonviolence was very different, for “The police recognized that, without a confrontation, the protests were largely meaningless, while protest leaders naively believed that by avoiding a confrontation they were actually winning. In fact, the protesters made police repression unnecessary by making themselves irrelevant. The protest could be tolerated precisely because it presented no challenge.”

An illuminating perspective is offered by George Calfentzis who writes, “The truly subversive intent of the Occupy site is to transform public space into a commons. A public space is ultimately a space owned and opened/closed by the state, it is res publica, a public thing. A common space in contrast, is opened by those who occupy it, i.e. those who live on it and share according to their own rules. The worldwide movement of occupiers is demanding common spaces where they can live on, in order to give body to their political thoughts.”

The distinction between the common and public space is reflected in such restrictions, as the Los Angeles Municipal Code section 41 18 (D), which states, “No person shall sit, lie or sleep in or upon any street, sidewalk or any or other public way.”

There is a fundamental question as to whether the places chosen by the Occupy movement serve the interests of those active in the movement or the interests of those already resident in those places: “In some instances they took over places used by homeless populations, in some instances occupiers took over places frequented by the drug using populations. In most of these instances, they took over places used by people of color . . . although the politics and the processes were very different, many of the various formations acted as a progressive form of gentrification of public spaces.”

One of the striking insights is offered by Hubert Wilkerson, “it’s the reality of occupation where people are trying to change world, but haven’t started changing themselves. This is just a popular thing they’re doing to be part of it. But they’re not looking to people.”

Occupy is eclectic, diverse and divergent. The perspectives of the different strata that comprise the movement are far from harmonious, uniform, and congruent in their priorities, tactics, and approaches. This consideration is reflected in the observation that “While no one sign could clearly speak to the reasons people were in the park—and if we’re to be honest, many of the signs actually made little sense unto themselves—the web they wove was a compelling statement about where we found ourselves in late 2011.”

We Are Many is a field manual for community organizers and social activists.

As such, this book provides practical guidance to challenge and understand, listen and support, acknowledge and respect, critique and share. Acceptance and consideration are important theme. “Don’t make assumptions no matter what a person looks like or what groups they belong to.”

Consistent with the Occupiers operating at the intersection of organization and anarchy, We Are Many contains first person stories combined with third person commentaries, that are polemical, reflective, exhortive.

Consistent with the ethos and pathos of the Occupy Movement, We are Many is a provocative and thought provoking book.