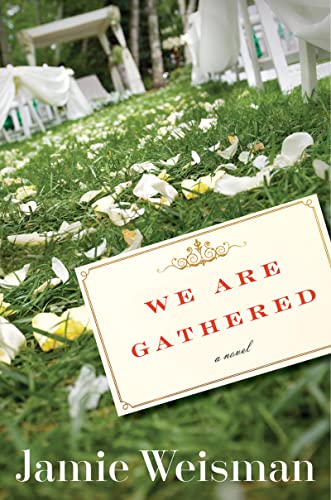 As scores of friends, relatives, and relatives-of-friends gather in Atlanta on a sunny April afternoon for the tastefully expensive wedding of Elizabeth Gottlieb and Hank Jackson, seven of these assorted step forward to narrate the interlocking sections of the debut novel We Are Gathered.

Jamie Weisman handles this venerable, complex structure with skill and smooth writing, giving the reader just enough clues to make the game of figuring out who is narrating which section and how the narrators are connected a challenge without being frustrating.

The main problem is that most of her narrators are unlikable—including, disastrously, the first two.

Carla Lefkowitz, a former classmate of the beautiful, beloved Elizabeth, has been burdened since birth with a limp and “a port-wine stain covering half of my left cheek, encircling my left eye like a claw, extending down my neck.” Okay, so Carla has reason to be envious and unhappy. But why must the novel begin with her nonstop, 40-page whine?

Moreover, a colleague from the Hollywood studio where Carla works gives her professional-level makeup that virtually erases the stain. Yet Carla refuses to use the potion. “I guess the reason was that if you aren’t going to be beautiful you might as well be ugly,” she thinks. Then stop kvetching, Carla.

Desperate for a change, the reader turns to Chapter Two and the bitter commentary of Elizabeth’s wealthy grandfather, Zayde Albert, now immobile and mute after a stroke.

Albert doesn’t like disorder, most philanthropy, his two sons, his four grandchildren, lesbians, the fact that Elizabeth is marrying a non-Jew, or even his devoted wife. Musing about Elizabeth, he allows that “I suppose she is my favorite grandchild, though she doesn’t have much competition.”

To Weisman’s credit, her seven narrators are vastly different, yet each richly developed, in terms of background, career, age, voice, interests, and personality. This is a difficult feat to pull off in a novel that relies so strongly on character and voice, and it’s even more impressive because this is only Weisman’s second book, following a memoir, As I Live and Breathe: Notes of a Patient-Doctor. In her day job, she’s a dermatologist.

Perhaps the most sympathetic narrator is Jack Chandler, “a poor white kid from Troy, North Caroline,” former college roommate of Elizabeth’s father, Vietnam vet, ex-heroin addict, ex-petty thief, and now, finally, finding some success as an artist and art teacher. He is the only one of the seven who really seems to change, and the ending of his section is beautifully subtle.

The other narrators include the mother of the bride, defensively looking back on her choice to be a full-time homemaker; her aunt-by-marriage, a lonely Holocaust survivor; the clinically paranoid older brother of a friend of Elizabeth’s; and the overprotective mother of a son with muscular dystrophy, whose husband was another college roommate of Elizabeth’s father.

However, this well-crafted structure falls apart in the last chapter. Not only does that section break the pattern, but it also veers into a fairy-fantasy that is totally out of character for one of the two co-narrators.

Perhaps Weisman was trying to end the novel with a traditional narrative climax. It’s true that there is no plot per se in We Are Gathered. Elizabeth and Hank say their vows; everyone cheers and eats wedding cake.

But that’s okay. The real plot is the seven stories that brought the narrators to this particular afternoon, and those stories are good enough reads.