We Are Each Other’s Harvest: Celebrating African American Farmers, Land, and Legacy 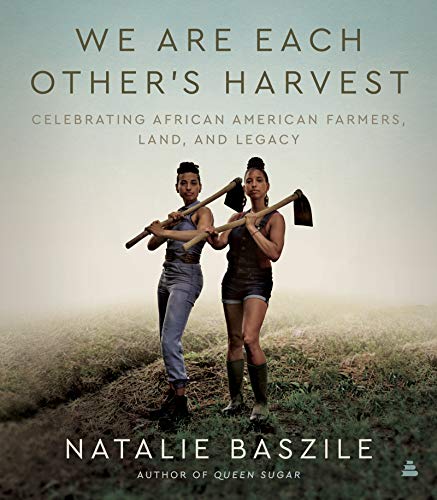 Natalie Baszile first caught a whiff of fame with her novel, Queen Sugar, that was adapted for TV and co-produced by Ava DuVernay and Oprah Winfrey.

Now with her second book, We Are Each Other's Harvest, she turns to nonfiction, and, as the subtitle explains, celebrates African American Farmers, Land, and Legacy.

Baszile is not the only one whose words appear in this big, beautiful coffee table book, but her name is the only one that appears on the cover and on the title page. That seems odd. After all, it took a village to write and produce this book.

Dexter Faison, one of the many African American farmers from North Carolina who appears in this book, argues that farming is "More like a self thing, not a group thing."

But another African American farmer from the same state presents an opposing perspective. Stanley Hughes explains, "With tobacco you'd harvest it with your own family, but when you'd get ready to harvest your corn, you'd have fifteen or twenty people."

We Are Each Other's Harvest emphasizes the "we" rather than the "I." Indeed, Baszile recruited half a dozen able collaborators who write passionately and with a command of valuable information about race, farming, repression, and resilience. They are thanked at the back of the book.

Braszile also includes the work of more than a dozen poets, including Lucille Clifton, Joy Harjo, and Yusef Komunyakaa, all of them accomplished and internationally renowned.

Still, Braszile does the heavy lifting, from the Foreword to the last chapter. Also, most of the color photographs in the book are hers. Alison Cootee is the other photographer represented in this book.

Together the images and the words suggest that "Black Is Beautiful" and that "Black Lives Matter," to borrow two well-known slogans that haven't gotten old.

Almost every book about farmers and farming is bound to be political. That's the case with We Are Each Other's Harvest, which offers poignant stories about slavery, reconstruction, Jim Crow, segregation, discrimination, Dr. Martin Luther King, Jr., and the civil rights movement.

Also, every book about African Americans is bound to be about land. Clyde Ford explains that "enslavement to the land" was often followed by "alienation from the land." Some African Americans ran as far away from farming as they could because it was regarded as "slave work."

But others were drawn to it because it offered the promise of self-discovery and meaningful labor with others. Melony Edwards explains, "I didn't know what a seed was. I barely knew that things grew from seeds." Melony leapt head-first into the world of farming, eager to learn how to drive a tractor and grow large amounts of food to feed people.

Her farming journey also took her into the past. Indeed, she learned that members of her family had been farmers for generations. "After Emancipation, my forefathers were first sharecroppers who were eventually able to purchase land," Melony says. "Family members still own the land to this day."

The best stories in this book are the stories about continuities that are told by the farmers themselves, including young women like Brenae Royal who was born in Biloxi, Mississippi, and who found meaningful work in, of all places, a Sonoma County, California vineyard owned by E. & J. Gallo.

The color photographs of the farmers, both men and women, leap off the page and spring to life, linking the past to the present, and history to an unknown future for everyone, Black and white, brown, yellow, and red. In “A Love Letter to Future Generations,” the poet Naima Penniman writes, “We are descendants of futurists.”

We Are Each Other's Harvest is a big cornucopia of a book, which a reader can begin most anywhere. It's also suitable for turning the pages and feasting eyes on the photos of working men and women wearing boots, jeans, sun hats, and bodacious smiles.

Baszile herself sometimes seems naive as when she discovers that the food in her community market in Berkeley is of better quality than the food in the market in Oakland owned by the same company.

"I was furious and offended," she writes. Good for her. But how did she manage to live for so long in California without being aware of the glaring inequities about food? One wonders.

We Are Each Other's Harvest tells a personal story. It recounts Baszile's education into what W. E. B. Du Bois called "The Souls of Black Folk," and it traces the genesis and evolution of her novel, Queen Sugar.

No doubt, Du Bois would love this book, as would Booker T. Washington, George Washington Carver, and Sojourner Truth who ferried slaves to freedom on the Underground Railroad where no one starved and everyone shared what little food was available.