We All Want Impossible Things: A Novel 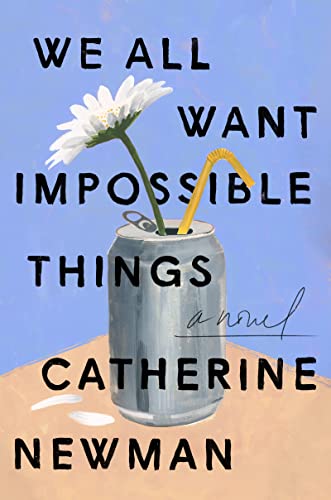 “What saves this book, in addition to the passages of Ash’s powerful voice, are the characters. They are all original, fully imagined human beings, likable in different ways.”

Edi, a 45-year-old mom and documentary filmmaker, is dying of ovarian cancer in a hospice in Western Massachusetts. Where does a novel go with this setup? There probably won’t be much narrative tension, so characters and voice become more important than usual.

We All Want Impossible Things relies mainly on the narrative voice and memories of Edi’s childhood friend, Ash. That works powerfully, except when it doesn’t.

When she’s honest about her deepest shame, grief, regret, jealousy, and love for Edi, Ash’s voice is unbearably compelling. “‘All of it’s in his bones. It’s the actual stuff of his body and brain,’” Ash tries to reassure Edi, as Edi thinks about her seven-year-old son, Dash, growing up without her. “‘The placenta you made from scratch. Your milk from nursing him. All those pancakes and school-lunch sandwiches, all of that food and care.’ She’s looking into my face, nodding, even though I am fully winging it now, panicking, words pouring out like I’m a hose on the weepy consolation setting.”

Of course, few books can maintain that sort of intensity for their entire length. But Ash’s voice for too much of We All Want Impossible Things is too cute, too aware of its own cleverness and crammed with nonstop one-liners. It’s fun for a few pages, until it runs into IV poles and gastrostomy bags.

When the hospital staff tell Ash they’re ending Edi’s active medical care, she likens it to the server at a burger restaurant saying there are no more burgers and “There’s just this plate of nothing with a side of morphine and grief.” Another time, Ash tells her estranged husband that “I might not know the difference between praying and decorating a cupcake.”

The minimal narrative covers Edi’s last weeks at a hospice near Ash’s home, as friends and family straggle in and out, sharing memories and rugelach, taking her outside for a glimpse of the “whole domed black sky,” and trying not to cry too much.

Author Catherine Newman is brilliant and unsparing in describing the ways Edi’s body deteriorates. “Her legs are so swollen with fluids, so heavy and unbendingly kneeless, they’re like actual logs,” Ash notices at one point.

Richly interspersed with this current-day story line are colorful flashbacks about Edi’s and Ash’s childhoods, marriages, house-hunting, and the raising of their own children. The psychological unraveling of Ash’s life creates a bit more active subplot, with her bouts of comfort food and one-night (or several-night) stands.

The other major problem with this novel is its premise: If Edi has only weeks to live, would she really leave her son and her husband, Jude—forever—to die in a hospice far away, merely because Ash and Jude can’t find an available bed nearer to her New York City home within their first few hours of phone calls? Wouldn’t Edi want to spend every last minute with her family? How about staying at home and hiring a temporary aide or nurse while her companions continue searching for a closer hospice?

What saves this book, in addition to the passages of Ash’s powerful voice, are the characters. They are all original, fully imagined human beings, likable in different ways. Most important, Edi is neither depressed nor spunky, but just herself—sometimes cracking jokes, sometimes scolding Ash, sometimes musing in odd ways that are subtle signs of cognitive decline.

“Write a book about this,” Edi orders Ash, a food writer by profession. “About all of this. Death too. About dying. Hospice.”