Ways of Grace: Stories of Activism, Adversity, and How Sports Can Bring Us Together 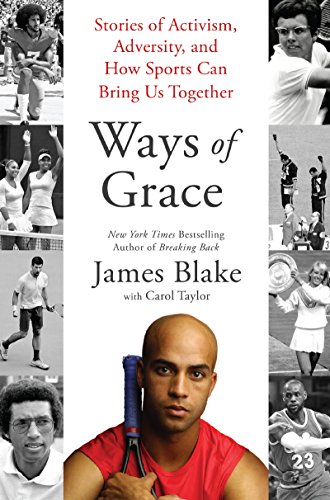 “James Blake’s book reminds us to keep our country’s ideals alive in the face of the clear and present political danger that confronts us.”

Like an overhead smash on the tennis court, James Blake connects in this new book with stories of activism by athletes. During this professional career, Blake became among the best American tennis players, rising to the rank of fourth in the world. Inspired by Arthur Ashe, Blake had long recognized that his role as an African American athlete gave him public prominence and a platform to speak out on issues of societal importance.

Blake was wrongfully arrested in the New York City in 2015, thrown to the ground, and handcuffed by undercover police. The incident raised issues of racial profiling. It received nationwide coverage and resulted in a public apology from the New York City Chief of Police.

Blake has continued to address issues of police violence against persons of color. Other victims, of course, do not have the same access to the media. Blake would speak for them, and the public would listen. Blake was fulfilling what he saw as the obligation of professional and amateur athletes to participate in the public debate about issues of societal importance.

Blake’s Ways of Grace tells the stories of athletes who have used their status to speak either about themselves or, more generally, about issues of significance to persons of color. Colin Kaepernick, quarterback for the San Francisco Forty-Niners, caught the public’s attention by kneeling during the National Anthem. Blake applauded this courageous action. Kaepernick lost millions of dollars in endorsements, and it may cost him his future as an NFL quarterback. He explained to the press: "I am not going to stand up to show pride in a flag for a country that oppresses black people and people of color. To me, this is bigger than football, and it would be selfish on my part to look the other way.”

Many will remember the Black Power salute of African American athletes Tommie Smith and John Carlos during their medal ceremony at the 1968 Summer Olympics in Mexico City. As a result, both men were stripped of their medals, suffered ostracism and significant income loss for standing strong.

Still other athletes, such as Martina Navratilova and Billie Jean King, have not suffered financially as a result of announcing publicly that they were gay. Acting as role models for young girls, these world-class tennis players were true to themselves.

Consistent with a political version of Newton’s third law—for every action, there is an equal and opposite reaction—the protests that Blake calls for have led to a public response. Although there were sufficient public protests by athletes to fill Blake’s book, there were many more negative reactions by other athletes, politicians and, in 2016, by the American voter.

Blake appears to take for granted that if athletes speak out, their fans would follow their lead. Regrettably, that has not occurred. Kaepernick was publicly accused of “treason” for not honoring America. The Black Lives Matter movement —a ground roots response to the repeated killings of young black men by police officers—has resulted in a backlash of racist hate.

The ultimate response to the protests Blake calls for was the election of Donald Trump as president of the United States. While commentators search for nuanced reasons for Trump’s astonishing victory, the simplest answer is most likely the more accurate one. America is a racist country. Immigrants represent the easiest target for American haters, but not the only target. America is no longer what it was: a white, Christian nation run only by men. Trump promised the electorate to return America to its previous “greatness.”

For sure, the protests of a few athletes will not change his intentions or the despicable views of those who voted for him.

That does not mean that Blake is heading in the wrong direction in urging athletes to speak out. They do enjoy a special place in society. Athletes alone, however, will not make a difference. The resistance will require a broad coalition of men and women who believe deeply in the values of our Constitution and the promises we have made to one another. Real courage and vigilance will be necessary before we can rest.

Few would believe that American democracy and freedoms can be so easily undermined. We should not forget the lessons of history, however. James Blake’s book reminds us to keep our country’s ideals alive in the face of the clear and present political danger that confronts us.