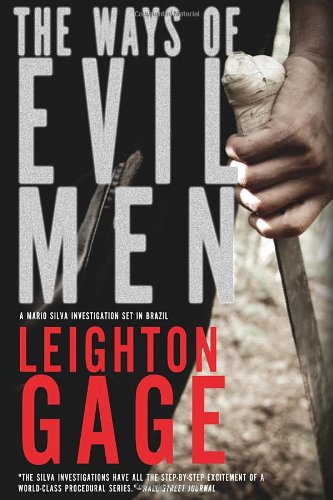 “There are few storytellers as gifted as Leighton Gage.”

“It isn’t very pretty what a town without pity can do.” That half-century-old song lyric by Gene Pitney can’t help but run though your mind as you read Leighton Gage’s seventh, Brazil-based Chief Inspector Mario Silva mystery The Ways of Evil Men.

If you’ve read other books in his series you already know how Gage’s fluid, precise, immediate prose captures within a fast-paced mystery the issues of class and social distinction, good and evil, and destructive obsession haunting his vast Brazil, a giant larger than the continental United States filled with diverse riches and complex contradictions.

The sense of place is set in the novel’s opening paragraph: “Sunrise is a brief affair in the rainforests of Pará. No more than a hundred heartbeats divide night from day and it is within those hundred heartbeats that a hunter must seize his chance. Before the count begins, he is unable to detect his prey. By the time it ends, his prey will surely have detected him.”

And the sense of what is to come follows in the fifth paragraph: “The hunt had taken them far. The sun was already approaching its zenith when they waded through the cold water of the stream, stepped onto the well-worn path that led from the fishing-place to the heart of their village, and heard the sound that chilled their hearts: the squabbling of King Vultures, those great and ugly birds, half the size of a man, that feed exclusively on carrion.”

As in all Gage books, the raw emotions and beauty of Brazil play as much a part as his characters, but in The Ways of Evil Men he’s created a high-energy masterpiece exploring what threatens his country at its core, and through the ensemble efforts of Silva’s team and other dedicated Brazilians, suggests salvation may come only through dedicated, individual action. It is a book that keeps you thinking beyond the time you’ve closed it.

On an Indian reservation amid Brazil’s remote, northern Amazon rainforest, 39 of 41 remaining members of a protected Indian tribe are found dead, leaving the future of the tribe and its reservation in the hands of government tribal relations agent Jade Calmon.

When Jade’s efforts to discover the cause of the Indians’ death elicits no cooperation from local townspeople and officials, she turns to her “old-girl” network, getting her journalist-best friend from one of Brazil’s major newspapers to come write a story, and the niece of Silva’s boss’ to send him and his team to the scene to get to the truth.

But intense racism and self-interest run deep and broad in this community, and there’s much to profit from the genocidal elimination of the Indians. Even the death of one of the community’s own is seen as a benefit. Silva and his team face unexpected twists, multiple suspects, a stonewalling community, and journalist Maura Mandel with a mind of her own.

There are few storytellers as gifted as Leighton Gage, and virtually none with his ability to convey messages of such societal importance in fast-paced, can’t-put-down mysteries that are not in any way preaching.

Leighton Gage passed away on July 26, 2013. I was blessed to have Leighton as my friend and as a colleague on the blog he founded, Murder Is Everywhere. He was a much loved, revered, and respected mentor and friend to many. In agreeing to do this review of Leighton’s final book I gave my word to be thoroughly objective, and in keeping with my promise I’ll share the one thing about it I could not stand: That there shall never be another.

Jeffrey Siger retired from an accomplished legal career to write full time primarily in his adopted home of 30 years, the Greek Island of Mykonos. His most recent book is Mykonos After Midnight: A Chief Inspector Kaldis Mystery.