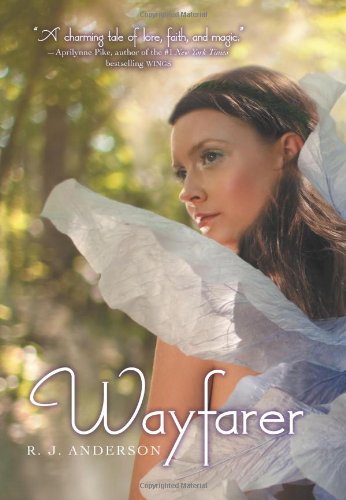 R. J. Anderson’s marvelous novel for teens, Wayfarer, is everything you would want a faerie story to be. She has written a winning fantasy adventure that doesn’t seem like a fantasy. All the characters are likable and genuine. It just so happens that some of them have wings, are very small, and can work magic.

Anderson treats humans and faeries as two distinct races occupying the same geographical space but separated by perception and culture. That the world of the fey and that of humans should be so delightfully integrated here is a triumph of imagination That the story is also accurately rooted in faerie lore is a plus.

Wayfarer is about the struggle to survive of a rural English faerie community that lives inside an ancient oak they call Oakenwyld. Their social order resembles in structure nothing so much as a hive of bees with a Queen, and a population of workers (but no drones, as will be explained later). The ancient and massive oak grows on a farm, called Oakhaven, in honor of the tree, owned by a wheelchair bound man named Paul and his very gifted wife, Peri. Peri, we learn was at one time a faerie named “Knife” because of her hunting skills, but was allowed to become human for love. Part of the deal she made with the Queen when she left Oakenwyld was that she would continue hunting for the faeries’ food and protect them from predators who love snacking on the tiny morsels flitting about the oak. It is getting increasingly harder to protect them as the crows and foxes are getting bolder and the faeries are losing their magic and growing weaker with every passing day. It is nearly impossible for them to maintain the glamours that hide the faeries and their home.

The structure of the plot takes the form of a typical quest. A fifteen-year-old faerie named Linden is charged by the dying Queen Amaryllis to find other faerie communities willing to lend magic to her domain to keep it from dying out. (It is perhaps no accident that the Linden tree is reputed in folklore to promote friendship, healing, and rejuvenation.)

Two hundred years before, the faeries began to weaken because of an event they call a “Sundering”—a break in the relations that faeries once had with humans. Until that time, faeries and humans got on well together and depended on each other. Faeries would occasionally mate with humans to strengthen the bloodline or adopt unwanted human children. Faeries inspired creativity in humans, although they were not creative themselves, and would then receive the benefits of invention from the humans. It was a mutually beneficial relationship.

“We faeries aren’t creative, like you humans are. On our own, we can’t make art or music, or come up with new ideas—we have to learn all those things from you. But at the same time, having faeries close by makes humans more creative, so it works both ways. Or at least it’s supposed to.”

The Sundering ended it all. The community’s Healer Valerian tells Linden it was the work of one good-hearted but wrongheaded faerie called Jasmine:

“. . . whose experience with humans had been bitter and she came to believe that faeries would be better off without them. She thought that our reliance on human contact to give us new ideas and creative skills was mere laziness and habit and if she could give us a way to maintain our population we would soon learn to thrive independently.”
But that took a great deal of magic to effect and left the faeries of Oakenwyld with little in reserve. The Sundering also excluded male faeries, forcing the females to reproduce by parthenogenesis from unfertilized eggs, which, as any first-year biology student will tell you, is just not as sustainable or interesting as having the opposite gender around. The population of faeries in the community has diminished from some 200 to a mere 45.

At about the same time the Queen was giving Linden her life task and enough magic to aid her on her quest, a human boy about her age arrives on the farm, having been suspended from school for fighting. Timothy Sinclair is going through some pretty tough times. Reared in Uganda by missionary parents, he was sent to the Greenhill Christian Boys School in England so he would gain some knowledge of his parents’ homeland. When he is suspended, he has no place to go but to his cousin Paul’s farm. Timothy is going through a crisis of faith; he is just not sure he can believe in the religion of his parents or even believe in God at all.

But Paul and Peri, in their efforts to protect Oakenwyld, have greater concerns than Timothy. He reads their distraction as indifference to him, possibly even hostility, and determines to bother them no more. He packs and sneaks away to board a train to London completely unaware that a little faerie ambassador has stowed away in his backpack.

He only becomes aware of Linden’s presence when she leaps from the backpack to defend him against an attack by one of the London fey—urban faeries—who are nothing at all like the residents of Oakewyld. These fey steal human creativity like vampires leaving them numb and insensible; they are sneeringly contemptuous of humans and treat them like cattle. They are ruled by a despotic faerie they call The Empress.

It has long been established in faerie lore that no faerie will ever reveal his or her name, for the name a thing is to control it, and the Empress holds them all in her power by knowing their names. To free themselves from her, as a small band of them wish to do, they would have to obtain the Stone of Naming from the Welsh faeries, called the Children of Rhys, who live on an island off the coast. Through the stone, they can get new names that the Empress doesn’t know and by that means break free of her. The monastic faeries also have reserves of magic that they could give to Oakenwyld if they were are so inclined.

They are not so inclined. They do, however, invite the faeries of Oakenwyld to come and live with them in their paradise, and this gives Thomas a chance to vent his frustrations not only with the Children of Rhys, but also with his religion:

“Why should the Oakenfolk come and live with people who have been so busy congratulating themselves on their goodness and generosity, they haven’t even noticed that the rest of the world is suffering? You keep yourself hidden away on these islands because you’re afraid of being corrupted. But, what good are your laws if they only help people who are perfect already? What use are your beliefs it they can’t stand up to the real world?”

Anderson’s novel is an intricately plotted adventure filled with dangers, both natural and supernatural, and eventual triumphs, but it’s easy to see that there is a deeper meaning in these adventures. She creates a multilayered, multidimensional faerie culture that is similar to but remarkably different from that of the race of humans. Each race and each population within each race is distinct and fully developed with attitudes, philosophies, and histories drawn from the peculiar environments they inhabit. Among these other faerie tribes, Linden is a stranger, a wayfarer, and to some faeries, one of “The Forsaken” and not entirely to be credited.
Linden is a sweet faerie and ignorant of the way of humans, but she learns quickly under the tutelage of her human friend. Even so, faeries and humans will always see things from different perspectives and there’s no help for that. What Timothy calls God, Linden calls The Great Gardener, and her take on the creation myth is quite different from his:

“When the Great Gardener planted the world,” Linden went on carefully, trying to remember the story just as it Queen Amaryllis told it to her years ago, “the humans were appointed to rule it and tend it and look after all the other creatures. And the first faerie, Lily—she was supposed to help them by watching over the garden and letting them know when the plants or animals needed care. The Great Gardener promised Lily that if she did her work faithfully she would in time receive a mate of her own. But as the days passed Lily grew impatient. She left the humans and flew off to see if there were any others like herself and when she returned the garden was in chaos and the humans were gone. So the Great Gardener punished her by taking away her creativity.”

The astute reader may recognize here a take on the name Lilith, who in some Jewish traditions is the first wife of Adam and was exiled for demanding equality with him. It might be that Anderson is making a sly reference to that ancient myth, but this reviewer may be reading too much into it. It does, however, serve to illustrate that faeries think differently from humans. Similar they may be, but not identical.

Linden, it must be said, is a believer in the Great Gardener, who is to her and possibly even to Timothy in time, a more charitable way of thinking of the Creator than he had been taught at his missionary school. Through the dangers they pass, the pain they suffer and trust in righteousness of their quest, they do form a true friendship.

“She didn’t judge him by the shoes he wore, or what music he enjoyed, or who his parents were; she hadn’t insisted that he share her beliefs or live by certain rules to please her. She’d just accepted Timothy as he was. . . .”

Not all these issues are tied up neatly at the end of the book, and that’s one of the great strengths of Anderson’s story. Strides have been made, but there is no completion. The community is altered and strengthened because of Linden’s quest, but there are still dangers and much work to be done.

Wayfarer is a thoroughly engaging and truly enchanting book for teens and adults. It is what we used to call a “ripping good yarn” that leaves the reader with a lot to think about.