The Way Spring Arrives and Other Stories: A Collection of Chinese Science Fiction and Fantasy in Translation 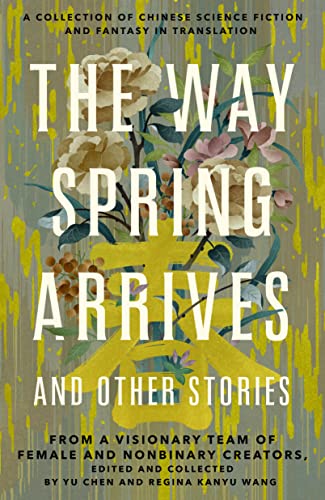 “While many of the stories contained within The Way Spring Arrives and Other Stories flirt with inexplicability, their charm and freshness cut through translation barriers.”

Science fiction and fantasy often concerns itself with worlds just beyond our ken—and science fiction and fantasy in translation can add another layer of mystery (some would say complication) to the proceedings, as we struggle to grasp strange goings-on while also negotiating unfamiliar cultural quirks and references. Those willing to tackle such a task will find much to enjoy in these sprightly 22 tales and essays, all written and translated by Chinese female and nonbinary authors and editors. While many of the stories contained within The Way Spring Arrives and Other Stories flirt with inexplicability, their charm and freshness cut through translation barriers.

Given the writers involved, one might expect The Way Spring Arrives to subvert norms of gender and sexual identity—and indeed, Chu Xidao’s delicate, feathery “The Portrait” literalizes the act of being seen and possessed, as the privileged male gaze of a master painter who devotes his work to objectifying women is upended by a female apprentice who outdoes him at his own art. Gender subjugation crosses species barriers in Shen Yingying’s “Dragonslaying,” in which “dragonslayers” are surgeons who perform procedures on fish-like creatures, transforming them into desirable women who can be sold to the rich.

For the most part, though, The Way Spring Arrives avoids direct commentary in favor of fable-like whimsy and fluidity, leavened with notes of melancholy. In Xiu Xinyu’s “The Stars We Raised,” stars are possessed by children like pets, then ground into brilliant dust when they fade—a fate that a sensitive schoolboy tries circumventing, with fateful results.

Earth-shaking events of another sort form the plot of Wang Nuonuo’s titular story, in which a young man pursues a woman who has the power to initiate the changing of seasons. Fanciful conceits such as flying fish ushering hot water from a gigantic stove to the sea, wishes tied to the backs of meteors and the Earth’s axis being physically pulled into place gesture toward the epic strains of ancient Chinese mythology, while the story’s conclusion embraces reincarnation and an exchange of fates and responsibilities, as the wheel of time takes another spin.

While The Way Spring Arrives accommodates a wide range of moods and subjects, few of the tales follow conventional science fiction scenarios. One exception is Nian Yu’s “A Brief History of Beinakan Disasters as Told in a Sinitic Language,” the meatiest story in the collection, which chronicles the history of a race of water-dwelling beings that stretch out across the galaxy and eventually encounter humankind. Touching on interstellar travel, global warming and genocide, the story is a bittersweet scrapbook of memories taken from races long lost (including, yes, the human race). Chao Haihong’s sardonic “Baby, I Love You” qualifies as speculative sci-fi even as it has fun with its scenario, with a game designer ordered by his bosses to have a baby with his wife so the baby-rearing app he is creating will be more realistic.

Many of the tales incorporate magical Chinese beasts of lore. In Count E’s good-natured “The Tale of Wude's Heavenly Tribulation,” a fox’s attempts to “cultivate” himself toward god-hood lead to humorous encounters with snakes, bears, and fake thunder gods.

Xia Jia’s “What Does the Fox Say?” deviates from straightforward narrative entirely, spinning the well-known phrase “the quick brown fox jumped over the lazy dog” into a cavalcade of musings and leaps of imagination that reference everything from Alice in Wonderland to The Lord of the Rings, Virginia Woolf, and Alan Turing, leaving the ultimate task of interpretation to us, the bemused readers.

Ling Chen’s “The Name of the Dragon” tilts toward whimsy, as the most popular mythical creature of them all is imprisoned within the design that coats an ancient porcelain vessel, content to get drunk and scoff at humans’ misconceptions of what it is.

As the above suggests, The Way Spring Arrives gets plenty playful with its mythmaking, forging scenarios that wouldn’t be out of place in traditional legends and giving them unusual twists. Wang Nuonuo’s “The Mountain and the Secret of Their Names” merges the mundane and the supernatural: a mountain village located close to a rocket launch site depends on shamans to prophesize the damages that will result when rocket detritus falls from the heavens, with the shamans’ very names serving as secret code foretelling disaster and salvation.

Anna Wu’s “The Restaurant at the End of the Universe: Tai Chi Mashed Taro” may steal its title from Douglas Adams, but has a vibe all its own, as restauranteurs from the future are tasked with bringing taro to an ancient lord and his mistress. As evocative as an oil painting, the story captures the bittersweet tang that comes with the passing of eras.

Interspersed with these fictions are essays that ponder the state of women and nonbinaries in Chinese literature, as well as the very real, vexing issues that come with translation. Emily Xueni Jin’s “Is There Such a Thing as Feminine Quietness?” breaks down the word “quiet” in Chinese, opening a can of linguistic and cultural worms as she muses on form and meaning in translation. Xueting Christine Ni’s “Net Novels and the ‘She Era’” is a scintillating survey of how literature written for online consumption has boomed over the years, affording an opportunity for female and queer writers to find their voice, in contrast to the more hidebound conservatism of traditional Chinese publishing.

In her closing essay, “Writing and Translation: A Hundred Technical Tricks,” Rebecca F. Kuang sums up the linguistic and cultural pratfalls of translation, while also underlining the collection’s value: “Translators are people who are used to being on the outside, who are used to navigating hidden spaces, and who are familiar with the challenge of making themselves understood.” The Way Spring Arrives is a fascinating sampler written by outsiders investigating hidden spaces, who tackle the challenge of being understood (and seen) with aplomb.