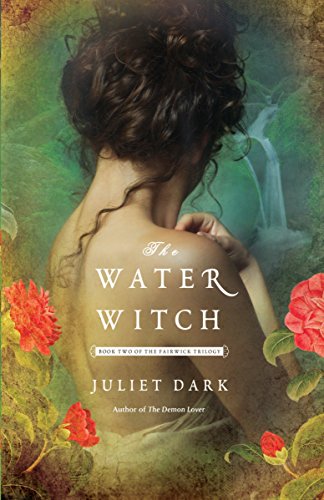 “. . . ends on a cliffhanger, leaving it open for a very welcome third novel in the series.”

Half witch. Half fairy. Completely confused.

That’s the state of mind of Callie McFay, the heroine of Juliet Dark’s The Water Witch.

In this second installment of Ms. Dark’s Fairwick Chronicles series, she reintroduces the quirky hamlet of Fairwick, home to a variety of mythical creatures. From Norse gods to brownies to succubae, Fairwick has them all, coexisting with apparently clueless humans, and all dependent on Aelvesgold to support their powers. The only known source of this magical stuff is Faerie, and the last door to that world is being threatened by a powerful cabal of witches, wizards, and Nephilim.

It’s a good thing the fae-folk of Fairwick have Callie, the last Doorkeeper, on their side.

The Water Witch is a lighthearted, fast moving fantasy. Though it might help in deciphering some references to have read the first book in this series, The Demon Lover, Ms. Dark has done a competent job of sketching the details of that book well enough to make it unnecessary.

Callie is a bright heroine, with the requisite number of problems to make a good fantasy romance: she’s torn between two worlds, learning to use her powers, and hopelessly fixated on the man she can’t have, in this case an incubus named Liam. As the novel begins, she’s faced with the problem of learning to control her immense powers while simultaneously dealing with personality issues between the various fae and a house that’s falling down around her ears. The race to see who will ultimately control access to the most valuable material in the immaterial world is fun, even if the “twists” are telegraphed from nearly the beginning of the book. It doesn’t matter in this case; it’s the interaction between the “races” and depicting her particular fantasy worlds that are the real foci of The Water Witch.

Two issues are briefly troubling: first, the overwhelming use of Gaelic/Irish names and syntax makes it difficult to remember that this story is set in the U.S., not Ireland. As such, the references to upper New York State are jarring.

As well, the abrupt way Ms. Dark jumps into fairly graphic sex scenes in the opening chapters of the novel is jarring. They seem neither natural nor particularly smooth; in fact, they almost seem to have been appended to shoehorn this novel into the currently hot romance market. They taper off in number and level of graphic content as the book progresses, and as such blend much more organically with the light fantasy of the rest of the story.

Really, though, these are small complaints. The Water Witch should appeal to readers of Charlaine Harris’ Sookie Stackhouse novels, as well as to the legion of fans hooked on the TV show “Once Upon a Time.” The Water Witch ends on a cliffhanger, leaving it open for a very welcome third novel in the series.