Watch Out for Her: A Novel 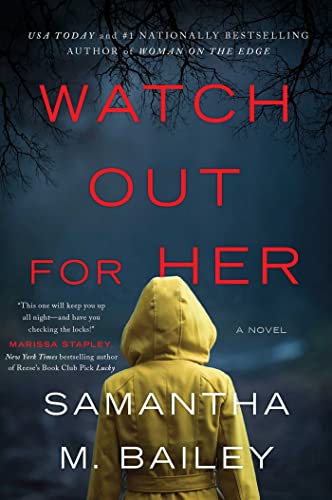 “Watch Out for Her, a hair-raising, suspenseful page-turner, will have one watching their back wherever they go, but what really gets to the novel’s heart is the unexpected and chilling ending.”

How many people have felt abandoned or neglected? How do they handle this when all they want is to be accepted and loved?

This captivating tale is about 22-year-old Holly Monroe, a beautiful young woman who comes from a wealthy family. Her father, John, is the high-powered owner of Health ProX, a pharmaceutical company. He has planned out Holly’s life, and through his machinations, he uses her to make his business an international conglomerate. Holly is home for the summer after completing her first year of medical school. Though she has attained a babysitting job, John submits his demands to her to attract wealthy country club colleagues to become investors. He shows no love or affection shown to her; Holly’s only closeness is with her older stepsister Alexis, with whom she shares a very close bond.

At an event at the club, Holly’s dad approaches her, reminding her of her “duty”:

“Her father kisses her on the cheek and whispers, ‘Charlie Lang should be here somewhere. Make me proud, honey.’

“She takes a deep breath, then says something that surprises her as soon as it’s out of her mouth. ‘Maybe Lisette can have lunch with Charlie next week? Now that I’m babysitting as my job?’

“Her father laughs like she told the funniest joke. ‘You’re my ace in the hole. I’m counting on you. And Lisette’s already arraigned for you to approach Charlie tonight.’

However, abhorrent her “duty,” Holly will do anything to gain her father’s approval.

Sarah Goldman is a middle-aged mother of six-year-old Jacob. She is alone with her son watching her life pass before her. She loves her husband Daniel but feels rejected because he is always working. To make her feel better, Daniel, a busy executive, hires a nanny for the summer so Sarah can have time to herself and to get back to photography, a passion she put on the back burner.

This is where Holly comes into the picture. Jacob quickly adores Holly, and Holly thinks things will be better—not only for her but for Sarah, whom she looks upon as a mother figure. However, Sarah is somewhat suspicious of Holly. Why would a wealthy medical student take a babysitting job? But the more Holly does for her, the more Sarah depends on her.

The problem is Holly craves being part of Sarah’s family. She despises her father and his commands for her to do anything to procure funding for his company, no matter how despicable. She is only a pawn to him, and to make matters worse, Lisette, her stepmother, agrees with her father. Holly never knew her mother, who died when she was born, and Lisette has never been a mother figure, not even to her own daughter, Alexis.

The babysitting situation goes well, giving Sarah time in her darkroom while Holly entertains Jacob during the day. Holly inserts herself into the household, right where she wants to be—not wanting Daniel—just longing to be a family member.

When Holly is home, she steals Lisette’s diamond bracelet worth thousands. She hides it in her drawer, self-satisfied she’s pulled one over on Lisette. The trouble is, Lisette is a snoop and finds it. She and John confront Holly. Her father is appalled by her actions and kicks her out of the house while Lisette smiles smugly. This turns out to be Holly’s way out from her father’s tyranny. With tears, she lands on Sarah’s doorstep in the middle of the night, begging to stay there. Of course, Sarah allows her in, feeling sympathy for her, but this is supposed to be temporary. Temporary is not in Holly’s vocabulary, for her plan is to be with them forever.

How does this work out for Sarah and Daniel? Holly soon turns into a conniver and manipulator. She confronts Daniel about something she’s learned about him. Then Sarah is shocked to discover the things Holly does in her home. Sarah, horrified, suggests they move from Vancouver to Daniel’s job offer in Toronto. This way, they’ll be away from Holly for good—but will they?

Strange occurrences happen at their new residence, which terrifiy Sarah. Daniel also becomes apprehensive of Holly showing up and divulging his transgressions. Has Holly come way across the country and is she stalking them?

The chapters are divided, noting the events in both women’s lives: Sarah’s is described in the first person, while Holly’s voice is in the third. The author also bounces to “before” and “after” in the time frame from Vancouver to Toronto. One may conclude this pattern would be confusing, but the narrative is so well written and joined together it flows effortlessly.

Watch Out for Her, a hair-raising, suspenseful page-turner, will have one watching their back wherever they go, but what really gets to the novel’s heart is the unexpected and chilling ending.