Washington's Immortals: The Untold Story of an Elite Regiment Who Changed the Course of the Revolution 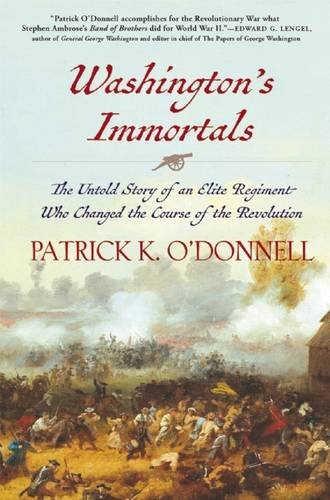 The history of the American Revolution has been told many times in many places. Just as in other conflicts, there remains a multitude of human interest stories to tell which have not been told and deserve to be or are otherwise obscure or unknown.

Although the overall chronology of the war is followed by author and historian Patrick K. O’Donnell in his latest book, the story on which he has chosen to focus is the origin, evolution, and exploits of the so-called Maryland Line. His thesis is that it was instrumental in maintaining the Continental Army’s field presence and the struggle for independence on multiple fields.

Each colony’s military manpower contribution was its own “line.” In this case, Maryland’s was its initial response to the British Crown’s perceived “intolerable” acts against the colonies in 1774–1775. At its organization, Baltimore’s social elite gathered and, paraphrasing the later wording of the Declaration of Independence, pledged their “lives, liberties and properties” to establish what became known as Smallwood’s Battalion.

The unit was primarily led at different times by William Smallwood and Mordecai Gist (pronounced with a hard G; and father to two unusually named sons, Independence and States Rights, the latter of whom was a Confederate general in the Civil War) and eventually morphed into separate formations commanded by each.

Early on, at the Battle of Brooklyn, August 27, 1776, the Marylanders became the rear guard for the American army as it collapsed and routed under a British flanking movement, driving it back into the fort at Brooklyn Heights. Many felt that his action saved the army and the Revolution, referenced by some as the American Thermopylae, but left 256 of them on the field to be buried in a mass grave now lost under the pavement and later development of Brooklyn.

As the war progressed, in victory and defeat, the Marylanders, with the attached Delaware Regiment, became the shock troops of the army. In many cases, it was a matter of being the self-described “forlorn hope” as potential suicide missions were characterized then. Indeed, George Washington came to rely on them for the most important assignments.

From the raid at Stony Point, New York, the battles of Brandywine and Germantown in Pennsylvania to Trenton, Princeton, and Monmouth in New Jersey, these intrepid Continentals were always in the forefront. With the war stalemated in the North, they were then dispatched to South Carolina to oppose the British strategy there of gaining the Southern colonies, in collaboration with Indians and Loyalists, and splitting them from the rest of the country.

With the French now on the side of the Americans, the British now found themselves with not only a manpower shortage but also the need to reconsider their options. The American strategy of cutting off supply and communication lines in conjunction with victories such as King’s Mountain, was sufficiently effective to force Lord Cornwallis and his army to their eventual rendezvous with destiny at Yorktown.

Interwoven with the military story of the Marylanders is the personal one of many of the leading men, privates, and officers, the disputes (and occasional desertions) among them and the privations suffered from lack of food, shelter, pay and the relatively crude medical treatment for wounds and disease over the course of their service.

Their reputation was well-deserved and, in the Afterword, the author urges an effort be made to recover the remains of the 256 killed at Brooklyn so their sacrifices can be duly and appropriately recognized.

O’Donnell has done well to rescue these patriots from being forgotten. Although there is no bibliography, the notes show primary sources were consulted from the National Archives, the Library of Congress, and archives, manuscripts, and repositories of many state and local historical societies. The several maps are excellent, from battlefield locations in respective colonies down to the tactical level at specific battles.

Many of the illustrations are in color, another highlight, and show, among other things, several of the individuals, primarily generals and other officers, referenced in the text. Black and white contemporary engravings are also included along with an index.

An endorser styled this volume as the tale of a Revolutionary “Band of Brothers.” Whether or not it comes across as such to other readers, it certainly provides an in-depth and personal look at what could arguably have been the human crux in the struggle for our independence.