The Wartime Sisters: A Novel 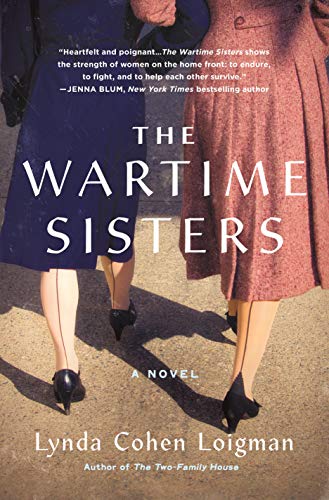 Sisters Millie and Ruth have seemingly been at odds since the day Millie was born. Despite Ruth’s brains, poise and elegance, Millie’s startling beauty has always stolen the spotlight. From the friends that first visited when Millie was born, to Ruth’s would-be suitors who ultimately chose Millie, to even their own parents, everyone has always seemed to value Millie’s looks over Ruth’s considerable talents.

Millie’s mother told her daughter her entire life that someone with her beauty was destined to marry a rich man, a famous man, a prince, someone who would raise her station to somewhere much higher than the meager Brooklyn existence she has grown up with.

When handsome, charming Lenny arrives on the scene, during a period of extreme sadness for Millie, her parents dislike him immediately. He and his ne’er-do-well brother do not embody any of the things that the parents had always envisioned for their precious prize of a baby girl.

Despite years of being passed over for her sister by potential husbands, Ruth finds Arthur, a brilliant and kind scientist with whom she immediately falls in love. While she trusts him completely with her heart, Ruth’s entire life has centered around being in Millie’s shadow, in knowing that what she wants can be taken from her by her sister at a moment’s notice.

Lenny starts out sweet, kind and doting toward Millie—and no one can deny his movie star good looks. But Millie has begun to see a few of Lenny’s flaws that she finds unsettling and, though she was previously determined to marry him, has begun to question her decision.

When tragedy strikes, Millie is thrust into Lenny’s arms, never knowing that there may have been motives behind his proposal that she never knew. At the same time, Ruth, Arthur, and their twin girls move to the Springfield Armory for Arthur’s new military position, separating the sisters geographically—and allowing Ruth to begin a new life where she isn’t in her younger sister’s shadow.

When Ruth finds that her sister is left a war widow, alone and penniless, she sends for Millie and her son Michael to come live with them. Ruth struggles to sort out her complicated emotions at her sister’s arrival, those of pity and love over her situation, jealousy over the way her friends already dote on Millie, and an underlying fear that history could repeat itself and everything Ruth has built could be taken from her once again.

Meanwhile, Lillian, Ruth’s best friend on base, has a complicated past of her own, and unknowingly inserts herself into Millie and Ruth’s relationship in a way that makes her best friend uncomfortable. Arietta, the good-natured cook and singer on base, connects with Millie right away, and she becomes a bit of a port in the storm for Millie as she navigates her new life. What Arietta doesn’t know is that her friendship with Millie will soon put her under a kind of scrutiny that she never would have imagined.

While Arthur is deployed, Ruth’s ever-polished façade breaks down, and Millie steps in to help run the household, take care of the children, and ease her sister’s worry and pain. But when someone from the past reemerges and a long-held secret that never should have come to light is revealed, the relationship between the two sisters is fractured once again, and these two sisters find themselves up against an adversary that threatens to do irreparable damage.

A fast-paced and beautifully written tale, Lynda Cohen Loigman’s latest brilliantly portrays tragedy, triumph and the complicated nature of family. The Wartime Sisters shows that the personal wars in life can sometimes mirror the larger ones playing out all around us—and that the bond of sisters, no matter how fraught with turmoil, can never truly be broken.