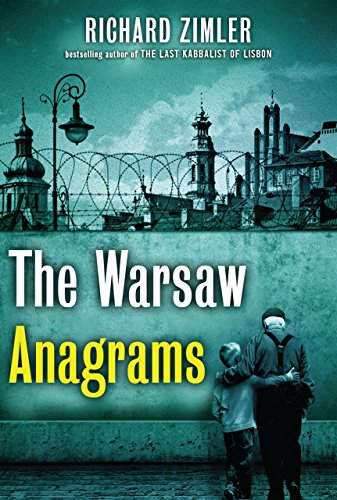 The Warsaw Anagrams is a fast-moving, powerful and intellectual murder mystery set within wartime Warsaw Poland during World War II.

Author Richard Zimler carries the reader deep into the daily life of Jews trapped within the horrific Nazi genocide. His striking portrayal of diverse characters is poignant and touching. Mr. Zimler proffers a salient and tender examination of the courage and fortitude exhibited by imprisoned Jews seeking only to survive one day at a time, layered upon a striking murder mystery filled with deception and intrigue. His knowledge of history is surpassed only by his clarity of literary purpose.

In 1940, Nazi Germany forced 400,000 Polish Jews into a dilapidated ghetto in Warsaw. Living in squalor, the Warsaw ghetto Jews began to die. In 1941, Dr. Erik Cohen, an elderly Jewish psychiatrist returns to Warsaw after being interned in a Nazi concentration camp. He befriends a man named Heniek Corben. Erik unfurls a murder mystery both heinous and complex. Jewish children in the ghetto had been murdered. Worse yet, someone removed a portion of the murdered children’s bodies. Erik confides that the ritualistic murder of Jewish children that took place several months earlier included his beloved great-nephew, Adam.

Corben gradually realizes that he is the only person able to see Erik. Portions of the psychiatrist’s story do not add up. Erik used anagrams for the names of his friends and family. He also portrayed himself as a secular Jew. Yet portions of his tale resemble ritualistic Judaism, including Kabbalah.

Through Erik’s eyes, we learn the abject terror of living as a Jew in a Nazi-controlled ghetto. A sordid tale of murder and mystery gradually appears. Erik lived with his niece and her bright, sensitive and loving son, Adam. The bond between boy and great-uncle intensifies. Erik loves Adam like a son. When the boy’s murdered body turns up with a missing portion, Erik transforms from a mild-mannered psychiatrist to an aggressive investigator. He interviews one person after another, following a trail of deceit and surreptitious behavior.

Erik is joined by his lifelong friend, Izzy. Relying upon each others’ strengths, they follow the trail of intrigue, coming ever closer to knowing the identity of the murderer. As life in the Warsaw ghetto deteriorates, Erik and Izzy close in on the murderers. Woven into the story are well-developed characters, playing their part in the grand deception.

Mr. Zimler, an accomplished novelist, brings to life evocative characters via controlled and convincing prose. His protagonists and the other primary characters are intense and expressive. They provoke profundity and passion. Erik is commanding and persuasive. The reader never seems to lose hold upon reality, despite Corben’s casual observation that the psychiatrist might be an angel.

The pace of this novel is steady and intense. The reader gradually observes signs and symbols pointing to the horrific perpetrators of this ritualistic murder of Jewish children. Mr. Zimler provides layer after layer of intrigue and excitement. This is not simply a novel about the Holocaust. It is a murder mystery that will challenge the reader to uncover a frightening truth within a world turned upside down by war and genocide.