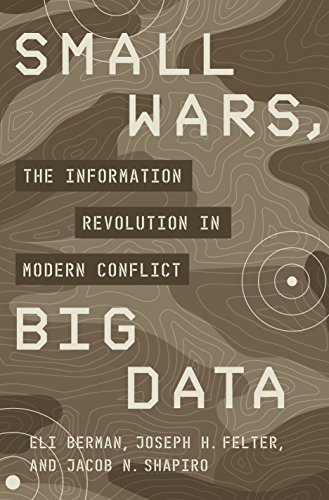 “offers some compelling insights on how to better handle these small wars . . .”

Modern military organizations use information technology to process large amounts of data for everything from logistics to command and control. But sometimes these systems generate so much data that collecting, processing, and displaying this data to draw useful conclusions can be difficult, particularly in the middle of wartime operations when time is a critical factor.

During the recent conflicts in Afghanistan and Iraq, the American military and civilian agencies gathered mountains of data on everything from aid funding spent to numbers of improvised explosive devices (IEDs) exploded or disarmed, to numbers of violent incidents against civilians. However, much of this data sat unused or underexploited for long term lessons and conclusions that could aid future counter-insurgencies, or as the military now calls them, stability missions.

This timely book, combining military history, statistical analysis, and social science, offers some fascinating insights into the highly fluid interactions between insurgent/terrorist groups and their opposing government forces. It goes further by exploring game theory to describe how the civilian population both sides seek to control may react to actions and reactions by the two opposing combatants.

The authors, combining their military experience and academic backgrounds, examine four basic factors and how these affect the relative success of insurgents versus government:  economic aid and development; military action and suppression of the insurgency by the government; the civilian response to harm by either insurgent or government forces; and the ability of civilians to share information with the government on insurgent activities.

The data obtained by the authors, much of it only recently declassified and released to academic researchers, is primarily from action in Iraq and Afghanistan; however, the authors also use historical data collected from other campaigns such as the ongoing insurgencies in the Philippines and historical campaigns such as Vietnam.

Their analysis is illuminating and sometimes counterintuitive, particularly when examining the effect of spending aid money on large infrastructure projects such as roads, bridges, and water treatment plants versus using smaller targeted sums in local neighborhoods on projects that have an immediate economic impact.

The primary hypothesis tested throughout the book is that no single factor in a counter-insurgency campaign is successful in isolation, and the combination of combat action, financial aid in the form of direct payments and infrastructure projects, as well as often overlooked information operations by the local government create a synergy of aid and security for the local population that has the maximum impact.

Their data and conclusions are compelling, and they do have the scrupulousness to note when the data does not fit their theories and offer potential alternate explanations. They also point out that what works in a dense urban environment like Iraq, where most of the population lives in or near major cities, may not work in Afghanistan, where populations are more widely scattered and isolated in valleys and mountainous regions.

One of their most interesting lines of analysis concerns the role of cell phone technology in allowing civilians to provide confidential tips and information to government forces. In many countries with active insurgencies, cell phones have become nearly ubiquitous, and the use of anonymous text messaging in particular can have a surprising influence on whether civilians provide important intelligence as it minimizes exposure and possible retaliation by insurgents.

Even as the United States and our allies have wearied of stability, nation-building, or counter-insurgency operations, no matter what they are called, conflicts in places like Syria, Somalia, and other unstable or ungoverned spaces will continue.  This book offers some compelling insights on how to better handle these small wars without needing to commit large numbers of troops or expend large amounts of treasure.