The Warriors of Anbar: The Marines Who Crushed Al-Qaeda--the Greatest Untold Story of the Iraq War 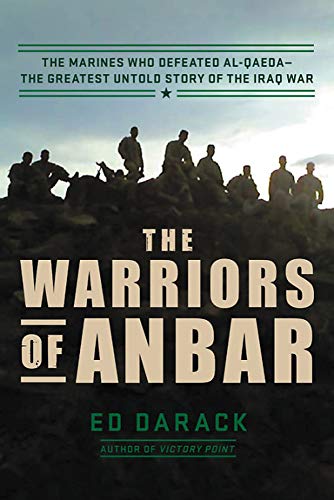 “Reading about the incredible bravery of American Marines, many not even 21 years old, shows that the long line of brave servicemen that answered their country’s call to service remains unbroken.”

Many Americans may not comprehend the heavy burden borne by our armed forces as they performed almost continuous tours of duty in Afghanistan and Iraq from 2004–2008. Ed Darack tries to convey some of that sacrifice in this tale of courage, perseverance, and ultimately brotherhood. It follows the 2nd Battalion, 3rd Marine Regiment, or 2/3 Marines as they call themselves, during their tour of duty in Iraq from 2006 to 2007, following his earlier book about their tour in Afghanistan, Victory Point, during 2005.

The book begins almost immediately as the Marines return from a year long tour in Afghanistan that saw both long arduous patrolling through mountainous terrain punctuated by intense combat. Learning they would be heading to Anbar Province, one of the most challenging regions of Iraq only six months later, the Marines quickly begin training and preparing for an entirely different operational challenge.

The Marines are going to Haditha, Iraq, in the core of the so-called Sunni Triangle and the heartland of the Iraqi insurgency and near civil war that was building in the latter half of 2006. Far from the mountainous villages of Afghanistan, the Marines were now thrust into a dense urban environment filled with hostile, or at best indifferent Iraqi civilians, and a growing level of violence from insurgents belonging to Al Qaeda in Iraq (AQI), the main terrorist organization in Iraq.

The battalion leadership quickly laid out a strategy for counterinsurgency (COIN) operations that incorporated many of the hard-won lessons from their tour in Afghanistan and the numerous operational experiences of the Marine battalion they relieved. But the challenges the Marines faced were constant and deadly and

Darack incorporates many interviews with Marines in the unit to present a vivid picture of the daily stress of being under nearly constant fire while having to make life or death decisions. The Marines faced a lethal and elusive enemy, described as “an army of phantoms on a battlefield of shadows . . .” For the Marines it was a daily routine of foot and vehicle patrols that faced snipers, ambushes, and improvised explosive devices (IEDs) that killed without warning and often presented little opportunity for the Marines to fight back.

In spite of these challenges the Marines used both their institutional experience and superb leadership from their officers and sergeants to keep the unit focused and on task, even as casualties accumulated. The ability of the company and platoon commanders to improvise and adapt to a constantly changing situation where they had to be both soldiers and diplomats is very impressive as Darack shows how the Marine’s steady efforts and constant pressure on AQI began to pay dividends.

As the Marines built up their presence, gathered intelligence on insurgent cells, and conducted raids to capture both insurgents and weapons, the intensity of the fighting increased. But the relentless and steady pace of the Marine effort soon began to pay dividends as Iraqis stepped up to join a reconstituted police force and civilians gradually turned on the violent Al Qaeda fighters that killed Muslims with the same abandon they turned toward Americans.

When the 2/3 Marines finally ended their tour in early 2007 they had nearly wiped out Al Qaeda’s presence in the Haditha area. The attacks against the Marines dropped off precipitously, the Iraqi police asserted control of the city and its environs, and most importantly for the Marines, schools, shops, and mosques all opened, giving the townspeople a semblance of normalcy.

But the cost had been high—23 Marines from the battalion had been killed and many more wounded, some of them suffering traumatic brain injuries or amputations from IEDs. But the battalion, serving alongside other American and Iraqi units, had broken the back of the Sunni insurgency and given the fledgling Iraqi government an opportunity to find a political solution to the country’s long-term problems.

Unit memoirs such as this are a staple of military history, conveying the immediacy of small unit action within the larger picture of an overall military campaign. Reading about the incredible bravery of American Marines, many not even 21 years old, shows that the long line of brave servicemen that answered their country’s call to service remains unbroken.