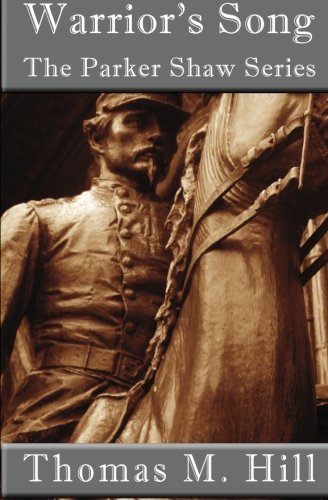 “Mr. Hill is a cogent and descriptive writer. In Warrior’s Song he provides a clear and descriptive foundation for the rest of Shaw’s journey, bringing to life the eternal coming-of-age struggle for self identification and purpose.”

Warrior’s Song, the first in a four-part fictional series by Thomas Hill, studies the life of 20-year-old Parker Shaw.

Shaw is a descendent of the famous Colonel Robert Gould Shaw, who commanded the first black regiment of the U.S. Army in the Civil War (made famous in the Edward Zwick film, Glory). This novel explores Shaw’s coming-of-age struggle with identity, family, purpose, and career goals.

The novel begins on the campus of the University of Virginia in April 2001 and it ends with the airplane hijackings and bombings of September 11, 2001.

In a strangely vivid dream, Shaw finds himself a Native American warrior pursued and murdered by a group of white men. Like a splinter in his mind, the dream drives Shaw to discover his connection with the murdered Native American.

With a friend, he travels to the American Southwest in search of the dream’s meaning. In this quest, he encounters a man who provides some perspective and direction. Shaw seeks a powerful revelation of the person he is supposed to be. In return, he is served nuggets of insight and enigma, bound together by a common thread of purpose.

Like so many college students, Shaw is torn between his father’s dream for his future and his own uncertainty. Shaw’s intellectual self-exploration provides the foundation of this novel. Hill sprinkles the novel’s dialog with references to the fundamentals of a liberal arts education, including American history, science, psychology, sociology, and philosophy. At first, these references seem unrelated; however, Mr. Hill winds them together in an increasingly pertinent existential rationale. Elemental to this exploration are concepts of the human soul, reincarnation and the integration of purpose, fulfilled as a result of Hill’s use of nuance and association.

Shaw finds within ephemeral out-of body experiences a fleeting but poignant insight. He has grown psychologically, as the boundaries of time and purpose become increasingly clear.

He comes to the conclusion that by understanding his past (including a past life) and by deriving insight from the contrasting parts of his personality, he will become a more fulfilled adult. No doubt this insight will serve Shaw well in the next three segments of the series.

Mr. Hill is a cogent and descriptive writer. In Warrior’s Song he provides a clear and descriptive foundation for the rest of Shaw’s journey, bringing to life the eternal coming-of-age struggle for self identification and purpose.

If Warrior’s Song is lacking in any aspect it would be in the fleeting perspectives of secondary personalities. Of course, brevity of purpose pushes the novelist to be concise in order to keep up drama and pacing, and it is hopeful that Mr. Hill will have the opportunity to engage in more profound character development in the succeeding titles in this fascinating series.