Warren the 13th and the Thirteen-Year Curse: A Novel 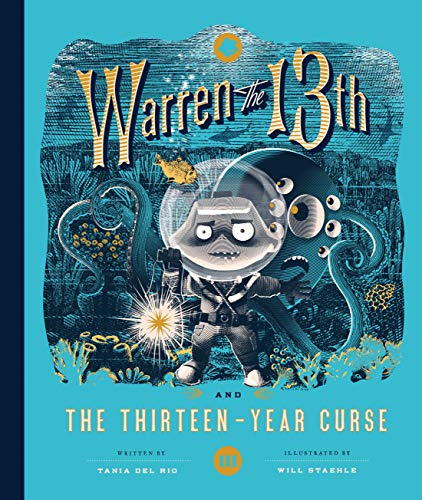 Warren the 13th and the Thirteen-Year Curse, the final entry in the amiable Warren the 13th trilogy, finds the titular hero confronting hard prospects. Has the arrival of Warren’s 13th birthday unloosed a curse on the family hotel he now, improbably, manages? Shipwrecks, kidnappings, knife-throwing clowns, and geriatric pirates threaten to divert—but not daunt—Warren as he attempts to quiet the apparent ill-luck. What sustains him is a plucky heart of gold, perhaps the outstanding creation from creator-illustrator Will Staehle and author Tania del Rio across the series.

At story’s outset, the celebrated Warren Hotel has gone seaborne (in book two it began walking, so all somehow makes sense). When a storm leaves the hotel marooned on a pirate-thick island and Warren’s octopus-like companion Sketchy goes missing, Warren—"born with gray skin and a toadlike face and crooked yellow teeth”—becomes convinced the misfortunes are his fault. “The legend goes that . . . Warren the 7th feuded with an evil witch who placed a curse upon the family,” reveals Warren’s aged tutor, Mr. Friggs. “(It) may be triggered by the very act of turning thirteen.” Cue up the redemptive heroics.

The search for Sketchy finds Warren mulling a sea witch’s riddles, decoding clues from a pirate gazette, and combating his once beloved idol Jacques Rustyboots in a circus at sea. The action is occasionally exhausting, with a somewhat haphazard feel when set beside the more tightly structured first book.

But Warren and his supporting cast continue to shine, as does the earnest goodwill of the story. The magic-portal-weaving Petula, Warren’s capable friend and burgeoning crush, assists when danger threatens to thwart Sketchy’s rescue. Petula’s mute, prodigiously tattooed mother communicates via carded pictographs she keeps handy. A self-important journalist is forever piecing together stories that seem unlikely to reach print. Ineffectual Uncle Rupert dreams of a full stomach. It’s ongoing fun to join Warren’s ensemble.

It’s also an ongoing pleasure to study Staehle’s illustrations, so plentiful they nudge the book partway toward graphic novel territory. The Victorian-esque, engraving-style drawings call to mind Edward Gorey merged with images from a Trader Joe’s flyer—but much better. Staehle adheres to a three-tone color scheme throughout—black-and-white always, on red in book one, green in book two, and now turquoise in the latest volume. The work this time around is the finest of the series. It’s impossible not to admire the attention Staehle has invested, just as it’s impossible not to appreciate the unaffected sensibility of del Rio’s story itself.

With welcome frequency, forgiveness, loyalty, and love careen onto the pages and are sweetly tested. For all the book’s shenanigans, it’s these elements of the story that stand out. “(E)veryone deserves a second chance,” Warren clarifies for a pirate girl who can’t fathom his goodness. “(V)iolence isn’t the answer.” It’s neither forced nor corny. In fact, the real charm of the Warren the 13th series is this relentless sincerity. The books avoid condescension and cynicism; they don’t wink at the adults reading along; there are no gross-jokes, no smugly confiding tones, nothing ironic or self-satisfied. Instead, there is an affirmation of friendship and fidelity that readers fortunate enough to open these books will applaud. As Warren himself says at one point, “It doesn’t get much better than that.”