Warren the 13th and The All-Seeing Eye: A Novel 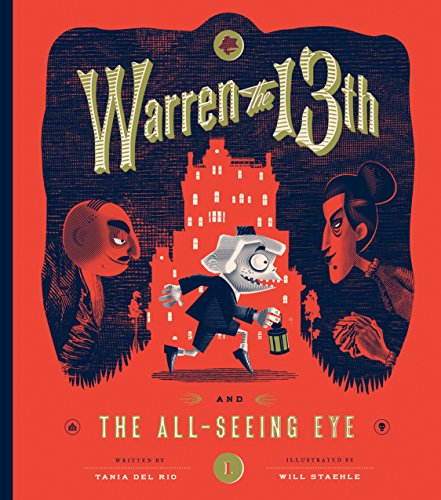 Warren the 13th and the All-Seeing Eye written by Tania Del Rio and illustrated by Will Staehle stands out among its peers in the young adult/children’s category of adventure stories. Warren the 13th, too young to inherit the once-beautiful and thriving Warren hotel from his departed parents, struggles to act as bellhop, janitor, chef’s helper, and more as his lazy Uncle Rupert runs the hotel into the ground through neglect and his obsession with his new and dangerous wife, Aunt Annaconda.

Obsessed with the all-seeing eye, Aunt Annaconda continually tears apart the once-lovely grounds, baseboards, walls, etc. in order to find what she believes to be a magical source and cure-all. One day, a mysterious bandaged guest appears, and not too long afterwards, a pale young girl Warren’s age, and soon a whole slew of guests who have heard about the all-seeing eye from Aunt Annaconda’s loose-lipped sisters who have come to help her search. From a family in khaki and pith helmets to barbarians and jewelers, everyone has their own idea as to what the all-seeing eye really is, and the raucous crowd practically disembowels the hotel searching for it.

Meanwhile, Warren does his best to play the gracious host as his father, Warren the 12th, and all the preceding Warrens, would’ve approved of, only to be thwarted by his ever-demanding Aunt. Warren makes friends with a mysterious creature in the basement, and between his new friendships and regular lessons with his tutor Mr. Friggs, Warren adventures through the hotel maze and the hotel itself in order to learn more about the all-seeing eye and stop his Aunt, at whatever the cost, from retrieving it. Aunt Annaconda is a fearsome woman, hurting those Warren cares about, physically and emotionally, in order to get what she wants.

Good triumphs evil in this page-turning tale. There is a touch of Transylvania Hotel and Lemony Snicket’s A Series of Unfortunate Events to Warren the 13th, filled with light and hope and humor, from the persistent chimney-clogging ravens to the whistling monster in the basement. This story is absolutely enchanting and is a must-have for any child who enjoys adventure and magic, whether this book is read to them or they read it for themselves. Adults will also enjoy this tale. Illustrated in black, white, and red, the imagery beautifully punctuating the pages and enhancing the reader’s visuals of the story unfolding.

Fortunately for readers, Warren the 13th and the All-Seeing Eye is not a stand-alone volume: there is another adventure planned for publication in 2016, so make sure to put that on your wish list for next year.