The Warner Boys: Our Family’s Story of Autism and Hope 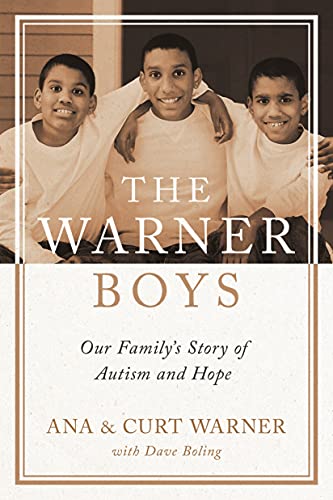 "When we tell them about the things that have given us strength, some say that ours isn't an autism story—it's a love story."

Ana and Curt Warner have written a heartrending story about life with their autistic twin boys, Austin and Christian. They had an older neurotypical son, Jonathan. The twins were born in 1991. All seemed well until their second birthdays. They began to exhibit behaviors that worried Ana and Curt. They cried incessantly and were way behind Jonathan when he was two. At five years old, they began to bang their heads against the wall so hard that they made holes. They also bit themselves, climbed out of their cribs very easily, lay on the floor screaming, and could disappear out the front door at any moment.

Curt had been a professional football player. Football was easy to understand. "In sports you scout your opponent, you understand their strengths and weaknesses. You form a game plan to exploit your advantages. But what happens when you know so little about what you're heading into, and even as you learn more, it seems like the situation is constantly changing . . .?"

It felt like a moving target. Then came the trek to doctors who had a hard time diagnosing this condition. It seemed like everyone was guessing and trying to solve a huge puzzle.

In the early ’90s, the medical profession was still not fully aware of this condition. Autism was first discovered by child psychologist, Leo Kanner in 1943. Noting that this condition was different from any other that had been reported in the literature, he named it "autism" from the Greek word for self "autos" because these children seemed happiest in isolation. Before this time, it was considered a rare and exotic neurological disorder (Steve Silberman, NeuroTribes). In 1949, Hans Asperger, a Viennese clinician, discovered children with different kinds of behaviors, which came to be known as "Asperger's Syndrome," and was on the autism spectrum (NeuroTribes).

It was not until the twins were five years old that they were finally given the diagnosis. The parents were shocked to learn that their twins were autistic. Ana began to feel guilty and blamed herself for giving birth to mentally challenged children. The doctor who diagnosed the twins told them that nothing could be done. "Stepping into the world of autism was like trying to find our way in a dark room." According to Temple Grandin, who is autistic, many teachers and parents try to make people with autism into something they are not—"turn the geeky nerd into an ungeek, for example (The Way I See It).

Ana went online and contacted other parents with autistic children. She decided that she would find a cure, but soon realized that there was no cure. Both Ana and Curt were facing the challenge of their lives. Learning to communicate and support each other helped them deal with these demands. But it was difficult because Ana let out her feelings while Curt kept them hidden inside. They knew that what they were going through could break up a marriage. But they were committed to working through everything together, and they refused to throw a pity party.

At first, they invited friends to their home, but Austin and Christian's behavior were too much for the guests. The same thing happened when they visited other homes. They decided to stay at home where they felt very isolated. Even when they took the boys to "Disney on Ice," Christian got lost. They couldn't even stay in a hotel without worrying that the twins would walk out the door or ruin the walls with their head banging.

Eventually Ana and Curt got the boys into therapy and various treatments. At puberty they began to show odd behaviors. Austin began to eat food from the floor, and Christian began to urinate on the floor. The doctor couldn't explain it. They became hypersensitive to touch and textures. Brushing their arms and legs seemed to help and this allowed them to feel close to their boys. Also, it was a way of showing how much they loved and cared for them. "My twins couldn't always communicate love for me, but I still knew they loved me." However, they didn't know fear so Ana and Curt had to fear for their own well-being. "The combination of physical strength with the absence of judgement and understanding of dangerous consequences was a recipe for disaster."

In the fall of 2007, when the twins were 12, they adopted an 18-month-old girl and named her Isabella. She was a good influence on the boys, and they all loved her. But Jonathan was affected by his brothers' autism. He refused to have friends over because he was ashamed of the messy house and was scared that the boys would have a screaming fit. He began to spend more time out of his house. He didn't want his friends to know that he had brothers that were different. "For me, autism was like this giant monkey on my back that wouldn't let go, and I mean really, it wouldn't let go. I could feel the judgement people had toward me and my family." Curt felt that there should be a support group for siblings.

Austin and Christian were obsessed by Disney stories that they watched on TV. However, disaster struck when they thought that the Disney characters were real and they imitated their actions. This was the ultimate test of their family, their marriage, and their sanity. People have asked how they kept it all together. "When we tell them about the things that have given us strength, some say that ours isn't an autism story—it's a love story."

Ana and Curt are each given a say throughout the book. It gives the reader an understanding of how each one coped with their situation. Although the challenges they faced were enough to break up a marriage, they both agreed that having a solid foundation of love and their strong faith helped them weather the hard times.

"We made a promise to one another, and to God, and we were going to stick it out through sickness and health. That meant there was no giving up." They remembered to look at the positive characteristics in their children, the wonderful things in their lives and to take joy in the little things. "We never accepted that autism could defeat us."

Ana and Curt's uplifting personal story is a must for parents who have a child in the autism spectrum or any other neurological condition. Theirs's is a recipe for a solid marriage for all parents, even if their children are not mentally challenged.