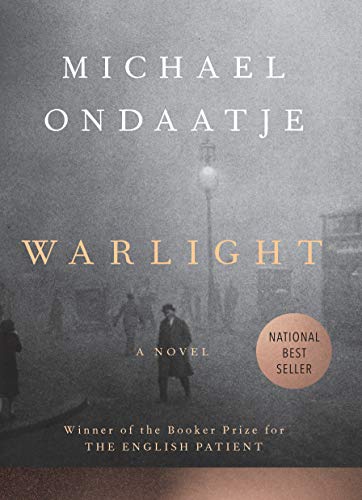 “Ondaatje has spun a dazzling tale that lingers long after the book is closed.”

One of the great pleasures of Warlight, and there are many, is being immersed in the vivid passages of war Ondaatje expertly evokes that plant the reader in the center of a war-torn London that continues to reel from the Nazi invasion.

From the very first sentence: “In 1945 our parents went away and left us in the care of two men who may have been criminals,” the 14-year-old Nathaniel and his older sister, Rachel, are swept into a lawless underworld of lies and secrets.  Secrets that burst to light like the explosive glare of bombings with “shrapnel frapping across the water.”  Or else revealed as if in the shadow of night, when dangerous cargo of nitroglycerine is “transported secretly across the city of London . . . when there was just warlight, the river dark save for one dimmed orange light on bridges to mark the working arch for water traffic . . .”

Nathaniel and Rachel are initially under the impression that they were left with The Moth, a guardian who would mysteriously leave at dawn and not appear until nightfall, because their mother had to go to Singapore with their father, that “there was no way . . . she could exist apart from him—she was his wife. There would be less calamity, less collapse of the family if we were left behind. . . .”

But these are necessary excuses children often make to blunt the pain of abandonment. Yet in the process of coping with their loss, Nathaniel and Rachel, “seemingly unconcerned about the absence” of their parents, will each become damaged in a different way so that the “collapse of the family” becomes inevitable.

As a group of odd, masterfully drawn characters frequent the house, danger looms above them all. When the “schwer,” as The Moth refers to danger, finally strikes, the unsentimental delivery of its arrival slaps the reader like a splash of icy water.

The adult Nathaniel begins to dig into archives to uncover why Ruth Williams, who appeared to deeply care for her children, would abandon them to their own devices and then go about “erasing as opposed to recording her past.”

In the process of solving the puzzle that is the life of Ruth Williams and her surrounding cast of eccentrics, Ondaatje has spun a dazzling tale that lingers long after the book is closed.