The War of the Sexes: How Conflict and Cooperation Have Shaped Men and Women from Prehistory to the Present 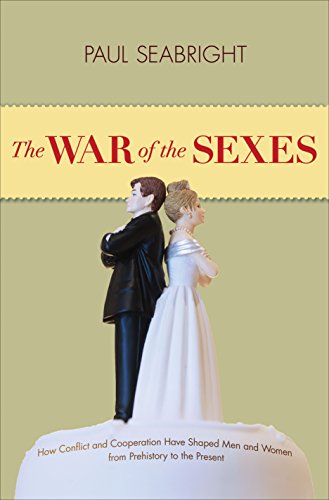 “The War of the Sexes: How Conflict and Cooperation Have Shaped Men and Women from Prehistory to the Present is definitely one book that it is quite all right to skim.”

Sometimes The War of the Sexes is fascinating and original, as it discusses how prehistoric women’s reproductive contribution gradually became seen as less valuable than men’s in the ancient tradeoff of sex for food and how that imbalance echoes in the corporate world today.

And sometimes this book is a slog—clichéd in its findings and clueless in its references to pop culture.

Unfortunately, the fascinating and the slog are often mixed together, especially in the early parts.

Author Paul Seabright, an economics professor at the Toulouse School of Economics, has picked out an interesting niche within the well-worn body of research on the evolution of male-female relationships. His thesis starts with this seemingly contradictory idea: “Conflict exists in a particularly complicated form between men and women because human beings are the most cooperative species on earth.”

The first half of the book relates this thesis to the earliest era of human history. Looking at everything from the mating habits of dance flies to testicle size in various primates, Professor Seabright explains why hunter-gathering women enjoyed far more independence and gender equality than their descendants living in supposedly more advanced agricultural societies.

On the surface, it might seem that the cooperation required to sustain a stable community would lead to a prehistoric kind of kumbaya. The inhabitants must bargain to establish their respective roles: This group will watch the children communally, this group will hunt together, this group will fetch water, etc, and then everyone will share.

But as the author points out, “to the extent that they do bargain, the result can be strikingly asymmetric because of the luck that gives one party the control of a particularly scare resource that the other needs.”

And here’s where the gender balanced tipped. Before agriculture, when both men and women were fairly equally foraging for food, and reproduction was all that mattered, women had the scarce resource: one egg a month vs. pretty much unlimited male sperm. Once women were tied down at home with the kids, however, they had to rely on men for protection and for the most valuable food source yet discovered, meat. (Kale and quinoa, apparently, would come later.)

Dr. Seabright adds another, more intriguing reason why cooperation isn’t all lovey-dovey. Cooperation, he points out, “may also, and simultaneously, favor the talent for manipulating others, for benefiting from the contribution of others while minimizing your own.”

Wisely, Dr. Seabright doesn’t try to trace this theme through every era of human civilization and skips straight to the punch line, the present. Have our supposed advances—including women’s suffrage, contraception, laws against discrimination and sexual harassment, and more egalitarian social attitudes—changed that millennia-old inequality?

The short answer is: not much. While the currency today isn’t always strictly sexual, age old socialization patterns are hard to break. For instance, Dr. Seabright points out how the difference in the two sexes’ forms of networking hurts women in the job market. There’s also a brief but amusing section where he imagines how chimp, bonobo, and gorilla anthropologists would analyze Homo sapiens behavior.

The book’s major problem is that, as he leads up to his insights into bargaining and cooperation, the author spends far too long re-proving points that have been well known, even by the general public, for years.

Most readers are probably aware that the large size of the human brain and skull make it necessary for babies to be born in a helpless stage, before the brain is fully developed, thus forcing mom to take care of them during an extended infancy and rely on dad for food. (For those who don’t know the details, this could be spelled out in a footnote.)

And sadly, it’s not really necessary to spend 30 pages—one-sixth of the entire text, not counting notes and index—establishing that gender discrimination exists in the workplace.

At the very least, the author should acknowledge that he realizes such facts are common knowledge, rather than pretending he is newly discovering them.

The War of the Sexes is also an outstanding example of why academics should not try to be one of the regular guys. For instance, it would seem that Dr. Seabright has never seen a commercial for Viagra or even Diet Coke. He argues that when auto makers use a supermodel like Claudia Schiffer in a car ad, viewers “know that she is spectacularly well paid” and thus the ad sends the message that “the manufacturers must think their product good enough to be worth backing with a very large budget.”

No; the ad sends the message that Claudia Schiffer is sexy, and if you buy this car, you will immediately become so sexy that other gorgeous women will fall all over you.

Just at the end, Dr. Seabright loses a major chunk of credibility by proposing “compulsory paternity leave” as one solution. Although his writing isn’t clear, he seems to be saying not just that it would be compulsory for business to offer such leaves, but that it would also be compulsory for fathers to take the leave. Never mind the Viagra ads; does he have any clue as to the current state of U.S. politics? (Unclear writing is hardly a forgivable excuse.)

Amid all these unnecessary explanations and ludicrous assertions, it’s hard to tell a reader how to find the worthwhile nuggets. Perhaps the best advice is that The War of the Sexes: How Conflict and Cooperation Have Shaped Men and Women from Prehistory to the Present is definitely one book that it is quite all right to skim.