War on Peace: The End of Diplomacy and the Decline of American Influence 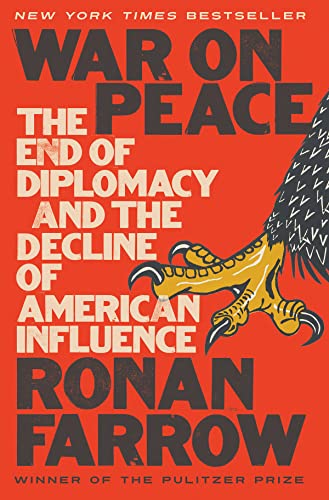 “Who should read War on Peace? Anyone concerned with the fate of America and the world.”

Here is a story of America’s decline in the world told by an insider/outsider—an assistant to Assistant Secretary of State Richard C. Holbrooke and then to Secretary of State Hillary Clinton, who later became a regular contributor to The New Yorker and a commentator for MSNBC and NBC News.

The author, who graduated from Bard College at age 15 and later from the Yale Law School, helped The New Yorker (along with The New York Times) win a Pulitzer for reporting on Harvey Weinstein. Ronan Farrow has met with all the living U.S. secretaries of state. All but one expressed deep concern that U.S. diplomacy is—literally and figuratively—under the gun.

The book’s leitmotif is Washington’s downgrading of the State Department and ever greater priority for the military arm of U.S. foreign policy. Most of the damage was done by the presidencies of George W. Bush and Donald J. Trump, but the trend began under Bill Clinton and continued under Barack Obama, intensifying as many of his preferences were stymied by Congressional Republicans.

Over the course of the 1990s the U.S. international affairs budget tumbled by 30 percent. On September 11, 2001, the State Department was 20 percent short of staff. Many of the remaining staff were undertrained and under-resourced. The George W. Bush administration sought to restore some of the gap, but focused resources on the “war on terror” and kept most policy-making close to the president, Dick Cheney, and Donald Rumsfeld.

The cruelest blows were struck by the Trump administration. Not only did it shrink an already shriveled budget for the State Department, but it fired experienced diplomats and did not replace them soon or ever.

In January 2017, for example, Thomas Countryman was America’s senior official on arms control issues. Having served in the State Department since 1982, weathering storms in Yugoslavia, Egypt, and Afghanistan, he had picked up Serbo-Croat, Arabic, Greek, and Italian. Based in Washington, he oversaw State’s dealings with Iran and North Korea. As the Trump presidency began, Countryman went to Jordan to meet with Arab diplomats a few days before he, along with his UK and Russian counterparts, were to discuss nuclear nonproliferation in the Middle East with other nations in Rome. Stopping in Jordan to meet with Arab diplomats, Countryman got a phone call from Washington. The director general of the Foreign Service informed Countryman that he (Countryman) would resign in two days. His place at the conference in Italy would be taken by a less experienced diplomat. The director-general fired six other senior career diplomats that same day.

The new secretary of state, oilman Rex Tillerson, did not defend his department but sought drastic reductions in its budget and personnel. He lasted 14 months before he too was fired and replaced by a confidant of the president.

Farrow has a gift for learning inside stories and retelling them in vivid, to-the-point prose. Most of his book describes U.S. policies toward Muslim countries—from South Asia to Bosnia to the Persian Gulf.  Farrow details the efforts of Richard Holbrooke to tame Pakistan and Afghanistan that ended with his heart attack in Clinton’s office in the State Department. But there is also a chapter on the civil war in Colombia and its denouement.

An epilogue provides a ten-page case study of the negotiations (including some shouting and long nights sustained by 30 pounds of mixed nuts and hundreds of espresso pods) leading to the Iran nuclear deal (in official terms, the Joint Comprehensive Plan of Action).

Here, as elsewhere in the book, Farrow bases much of the story on conversations with top diplomats. He provides a balanced account of the plan’s advantages and liabilities. Some of the shouting was by John Kerry in 2015, upset that the Iranians wanted to renege and renegotiate—the very actions demanded by the Trump administration in spring 2018.  Kerry then predicted that if the deal went belly-up, the world would blame the United States—not Iran. Kerry went for a jab: “If that’s the art of the deal, you can see why this guy filed for bankruptcy seven times.”

Farrow observes that this was a sound bite from another era, when you could shame someone into seeing the error of their ways, and when a sound argument could make a difference. In American politics, however, “that time had passed.” Logic and facts were passé.

If the Iran deal offered lessons for diplomacy, many career diplomats told Farrow, it was this: “embracing the compromise and imperfection of the deals, realizing they could avert war and save lives; investing in working-level diplomats and giving them a long enough leash to do their jobs; and installing leadership with a visionary belief in large-scale diplomatic initiatives like the ones the Trump administrations seemed bent on dismantling.”

Tom Countryman, back in Washington, spoke to his 260 employees in the Bureau of International Security and Nonproliferation. He said he was “probably the most gruntled person in the room.” But he warned: “A foreign policy without professionals is, by definition, an amateur foreign policy.”

Adding to a story first published in the British newspaper Observer, Farrow in The New Yorker (May 6, 2018) presented evidence that the private Israeli intelligence agency Black Cube, employed by Weinstein to gather negative information on his accusers, had also been hired by Trump agents to find damaging information on proponents of the Iran nuclear accord.  The next day, May 7, President Trump announced he was withdrawing United States from the deal.

Could there be a link between Farrow’s interests in international diplomacy and his reporting on sexual abuses by powerful men? Interviewed by The Guardian (May 14, 2018), Farrow said that “you’re looking at the very same systems of power and the abuse of power and the suppression of stories that are employed by powerful men in Hollywood and powerful people in politics.” (Andrew Anthony, “Ronan Farrow: Woody Allen, Harvey Weinstein and me,” The Guardian, May 14, 2018. Woody Allen is Farrow’s nominal father, though Mia Farrow, his mother, has said that her ex-husband Frank Sinatra might be the real father.)

Who should read War on Peace? Anyone concerned with the fate of America and the world.