Waltzing with the Enemy: A Mother and Daughter Confront the Aftermath of the Holocaust 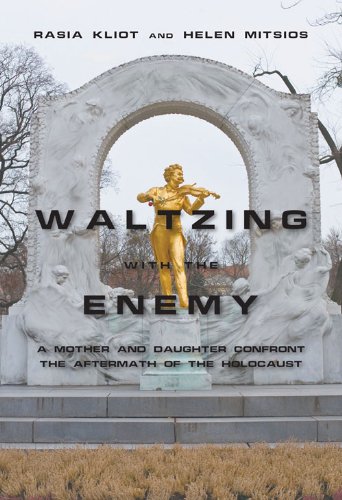 “While Waltzing with the Enemy contains an historic and personal account of life during the Holocaust, it also delves into the lasting repercussions such tragedies provoke in future relationships.”

Dozens of Holocaust survivors have written books about the atrocities they suffered during this dark time in history. But Waltzing with the Enemy offers more than simply a heartwrenching tale of unspeakable atrocities, loss, and endurance.

In addition to the personal story of Rasia Kliot, the book investigates the complex relationship between this mother, ever fearful that her true identity will be discovered, and her daughter, who suffers the horrors of the Holocaust vicariously, affecting her ability to achieve personal fulfillment and satisfaction with her life. The process of writing this book brings a feeling of freedom for one and a catharsis for the other.

The first part of Waltzing with the Enemy belongs to Rasia, who takes the reader on a bittersweet journey through her life a few years before Germany invaded her hometown of Vilnius, Poland, into present day New York City where she now resides.

Born into a privileged family, Rasia is relatively isolated from antiSemitic attitudes until Nazi soldiers occupy the town and confine its Jewish citizenry to a ghetto. Accustomed to a comfortable existence with a splendid apartment in the city, a house in the country, fine furniture, and servants, Rasia now must endure dirty, overcrowded living conditions with little to no food for days on end. No longer is she allowed to attend a gentile school and intermingle with her Christian friends.

Rather than submit to the restrictions imposed on her, Rasia discovers a hidden strength and determination that drives her to take risks in order to care for her family. Throughout the next six years, she assumes the identities of several non-Jewish individuals with the help of friends and strangers alike, enabling her to temporarily escape the confines of the ghetto and search for a way out of Poland. Resourceful, creative, persistent and remarkably mature for a teenager, she manages to make connections that yield food, shelter and eventual escape for her mother, brother and herself.

Told in a matter-of-fact manner minus any self-pity—in keeping with Rasia’s character—the tale at times contains lyrical language that belies the appalling circumstances. In one scenario, Rasia describes the snow as “. . . diamonds falling from heaven, covering the roads and chimneys with a thick white-blue blanket creating a huge horizon united with the sky, my own magic snow world.”

As the story progresses and danger becomes an integral part of her normal existence, Rasia continues her poesy with lines like this: “It was getting dark and I think the stars must have been crying looking at us.”

While Rasia maintains a matter-of-fact tone in the telling of her horrifying experiences, partway through the book she engages in some authorial meandering, which provides a peek into the deep-seated feelings of fear, isolation and loneliness that she harbors while seeking safety. She says, “I was a living body with a shut-off mind—a self-imposed mechanism without the burden of thought, of past, of present.”

Rasia’s determination, luck, cunning, and astute observations, as well as her willingness to take the initiative, helped her lead her family to safety. Although she emerges from the war years physically unscathed, she bears emotional scars that remain hidden from view and inflict long-lasting negative effects on her daughter.

One particular quote in the book sums up Rasia’s innermost and lifelong desire: “But I longed to belong and mix in with the free people. Even to pretend to be one of them for a while. Deep down the fear never left me for a second.” Although she and her family managed to escape with their lives, Rasia’s distrust and perpetual fear her true identity as a Jew would be discovered remains with her for decades.

Rasia’s daughter Helen relates her story in the second part of the book. Until she is 12, she is unaware of her Jewish heritage due to the concerted efforts of her mother. Determined that her daughter should avoid any possible exposure to antiSemitism, Rasia pushes her offspring into her husband’s religion—Greek Orthodox—and later enrolls her in a Catholic school. Throughout her early years, Helen exists in a protective environment that discourages questions and independent thinking.

Upon learning the truth of her cultural background, Helen feels that she “. . . had a foot in two worlds,” although initially she accepts her Jewish heritage as a cultural aspect and nothing more; however, she eventually becomes conflicted and uncomfortable with her mother’s dual public and private roles. While she mimics Rasia’s behavior, Helen unconsciously seeks to find her own identity.

During the next few years, Helen makes a few attempts to adopt the Jewish religion without success, but she also continues to hide her heritage from public view, still mirroring her mother’s duality.

A fortunate set of circumstances leads Helen to Dr. James F. Masterson, a world-renowned psychiatrist. At the age of 41, her psychological profile begins with chronic depression, but also includes claustrophobia, anxiety, insomnia, an inability to sustain intimate relationships and previous bouts of anorexia. With the help of Dr. Masterson, Helen starts to understand and accept that her mother’s standards have dictated her lifelong behaviors and beliefs. “He identified the trap I had fallen into. With his help, I could emerge,” she says. Helen begins to accept that her childhood has been shaped around what her mother had lost.

While Waltzing with the Enemy contains an historic and personal account of life during the Holocaust, it also delves into the lasting repercussions such tragedies provoke in future relationships. For Rasia, revealing her life story has helped her emerge from the nightmares of the past. “For the first time since I took on the role of my false Christian identity papers so many years ago, I am free to be Rasia Kliot.”

For Helen, writing the book in collaboration with Rasia has led to a deeper understanding and acceptance of her mother’s life as well as understanding of her own. She says, “On a certain level, she’ll always be a stranger to me—like a spy with a hidden identity, with an unknown past.”